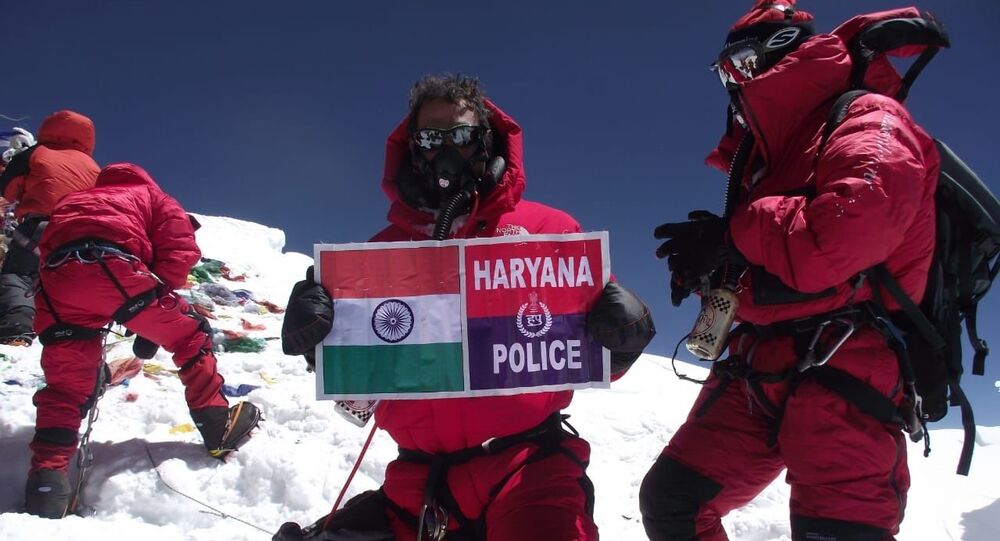 Kapil Ruhil from Raichadwala in the Indian state of Haryana who scaled Mount Everest in 2012 aged 23, has told Sputnik about his legal fight to get a senior position in the local police. It was only in 2013 that mountaineers became eligible for receiving cash awards and certificates that help to secure government jobs under a sports quota.

Sputnik: What have your accomplishments in the field of mountaineering been and how as a sportsperson did you venture into mountain climbing?

Kapil Ruhil: I have always been physically fit and loved outdoor games as a child. Kabaddi-- a popular sport in the Indian subcontinent-- was the most favourite in our village and I mastered the game. I began playing at the village level, then zonal, state and went on to play on the national Kabaddi team. Simultaneously, I began practising for high altitude climbing as it had always been my passion. In 2012, I became part of an expedition to Mt. Everest and we successfully made it to the summit on 19 May.  There has not been any looking back since then.

Sputnik: How is your accomplishment different from that of other climbers who have successfully reached Everest's summit?

Kapil Ruhil: I am the first and the only sportsperson in India to have played a game in a national team and simultaneously pursued mountain climbing. I was part of the national Kabaddi team from 2010 to 2012, when it won the World Kabaddi Club three years in a row.

Conquering Everest was my dream and I relentlessly worked towards it, ensuring along the way that I don’t compromise on my game goals. No other mountaineer has been part of a national team in any sports game or vice versa.

Sputnik: Which other peaks have you scaled after Mt. Everest?

Kapil Ruhil: In 2014 I climbed Mt. Elbrus, the highest peak in Russia and Europe. The same year I headed to Africa and scaled its highest peak, Mt. Kilimanjaro in Tanzania. In 2015, I made an unsuccessful attempt to break the world record of climbing Mt Everest twice in 240 hours. Our expedition was hit by avalanches and blizzards as the weather played truant and we had to abandon our expedition. Besides that, I have scaled Imja Tse Island Peak, Kala Patthar in Nepal in 2012 and Kuber Peak and Patalshu Peak in India.

Sputnik: You have filed cases against the state government in the Indian state of Haryana. What is the legal battle about?

Kapil Ruhil: I joined as a constable in the Haryana Police in 2008, which is the lowest-rung job in the police force. After I scaled Mt Everest in 2015 and played in the National Kabaddi Team, I became eligible to get a senior level job in the police force along with prize money that the government gives to players and mountaineers who bring laurels to the country.

However, I was denied this and the mountaineers who climbed Everest later in 2014 were given the senior level jobs in the police and prize money. Though they got their due but I didn’t. I filed a case against the government in court, seeking directions to the government to give me my due.

Sputnik: How has the experience been of fighting the legal battle and what is its status, as of today?

Kapil Ruhil: I filed a case against the government in 2016 and in 2019. The Punjab and Haryana High Court ruled in my favour, directing the government to release the $29,000 prize money and senior level police job - the rank of Deputy Superintendent of Police. However, the government sought from the court that my case be linked with another ongoing similar case. Now I am waiting for that case to get decided by the courts.

© AP Photo / Tashi Tsering/Xinhua
Nepal Turning Everest Garbage Into Art Exhibit to Raise Awareness of Mountain's Trash Problem
For the past six years I have been spending time in the corridors of courts, meeting with lawyers, and working out my case and it has left me morally down. My resolve and determination never wavered even in the face of the world's mightiest mountains and I happily took all the challenges that nature threw in my way. However, the pain of fighting a legal battle has been too much for me. Sometimes, I feel broken. I have literally forgotten the ropes of mountaineering and lost my way in the courtrooms.

Sputnik: How has your family supported you and what are your future plans?

Kapil Ruhil: I belong to a village in Haryana’s Jind district and my family owns a small piece of agricultural land. Of late, though I am still a constable in the police force, I have started helping my father with the farming. Mountain climbing is an expensive affair and money is hard to come by. I plan to work more on the farming front now. However, I have plans to return to mountain climbing and am looking for sponsorships to fund the expedition to Everest once more and attempt to break the world record of climbing it twice back to back.