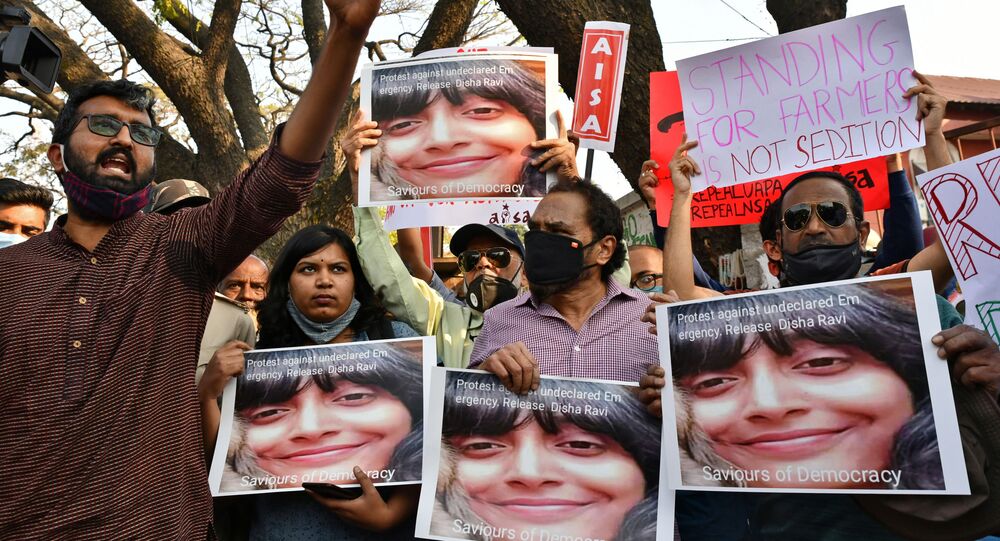 Disha Ravi was arrested on 13 February in connection with a tweet by Swedish climate activist Greta Thunberg, who shared a "toolkit" designed to aide the ongoing farmers' protests in India.

An Indian court has granted bail to climate activist Disha Ravi, who was arrested in connection with a probe into the "toolkit" case that backed the ongoing farmers' protests.

"Considering the scanty and sketchy evidence on record, I do not find any palpable reason to breach the rule of bail for a 22-year-old girl who has absolutely no criminal antecedent," Additional Sessions Judge of Patiala Court Dharmendra Rana said in his bail order.

The Delhi Police registered a sedition case against the 22-year-old activist after she was accused of editing a toolkit that was tweeted by Swedish climate activist Greta Thunberg on 3 February at the height of the farmers' protests.

A Delhi Court on Tuesday granted bail to 22-year old climate activist #DishaRavi, who was arrested by the Delhi police from her Bengaluru residence on February 13 in the farmers protest '#ToolkitCase
Read more: https://t.co/qI1cqh4E3q pic.twitter.com/mt3GbM7bg3

​Police accused Disha Ravi, activists Nikita Jacob and Shantanu Muluk of collaborating with the pro-Khalistani group Poetic Justice Foundation in creating the "toolkit" that contained tips on how to help the farmers. The claim made by the police has been denied by these youth activists before the court.

The toolkit reportedly called for coordinated online and offline action to support India’s protesting farmers, including agitations near Indian missions around the world as well as at the residences of prominent businessmen, among other locations.

Farmers from across India have been protesting since late November on Delhi's borders demanding an absolute withdrawal of three farm laws introduced by the Narendra Modi government.