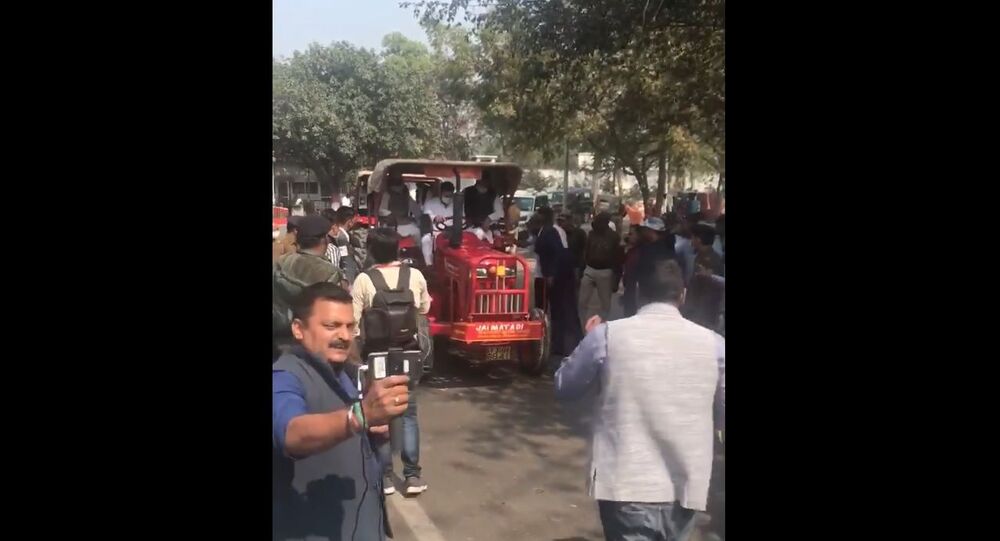 India's federal government is facing the fury of opposition parties, social media users, and people on the street due to the relentless rise in the cost of petrol and diesel by oil marketing companies in the country.

Ahead of the budget in the Indian state of Bihar, opposition leader Tejashwi Yadav rode a tractor to the state legislative assembly on Monday. He was expressing his solidarity with the farmers and was protesting unprecedented hikes in fuel prices.

In a video clip of the incident, Yadav was seen wearing a mask and driving the tractor. Along with him were two supporters who were seated next to him on the vehicle.

Yadav termed it a "tractor march" that he began from his house to the assembly in Bihar state's capital Patna.

The youth leader was followed by another tractor, while police personnel were seen walking next to the tractor to check any kind of chaos.

The moment Yadav stopped the vehicle on the Patna road, the media surrounded him to get a glimpse and to capture footage of the politician.

The Narendra Modi-led federal government and the governments in different states have levied huge sums of taxes on fuel - somewhere between 55 and 60 percent of the price of petrol and diesel. The cost of a litre of petrol crossed the INR 100 ($1.38) mark in parts of the country on Sunday.

Indian farmers have been protesting against three new agricultural laws since 26 November. They want the central government to revoke them and for this they have been blocking traffic on the outskirts of the Indian national capital, Delhi, to achieve their ends although they did enter the capital and on Republic Day, 26 January.