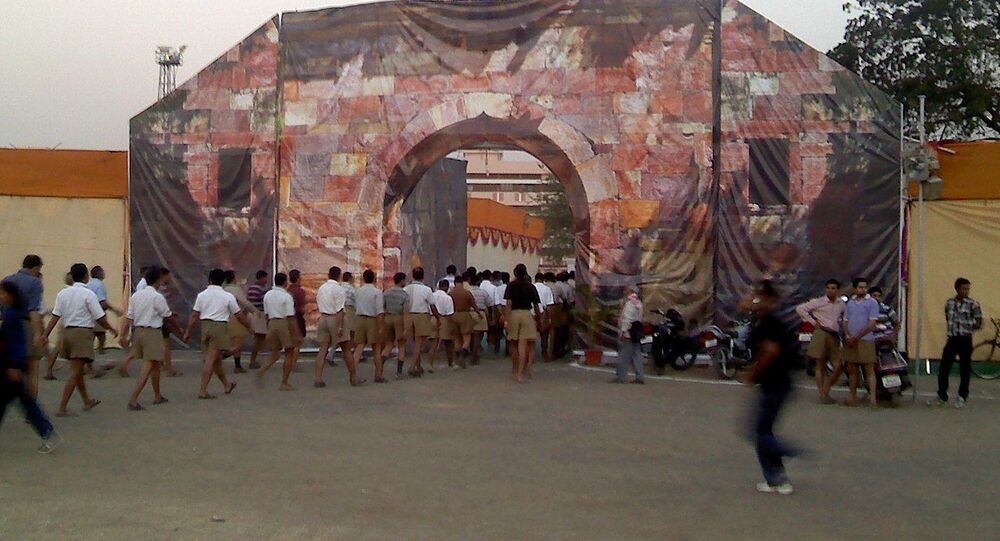 Members of the Popular Front of India (PFI), the organisation behind the controversial march, have in the past been accused of being involved in terrorist activities in India, a charge contested by the outfit. There have also been calls to ban the PFI by several Indian state governments.

A political rally by the Islamist outfit Popular Front of India (PFI) in the southern state of Kerala, in which men depicted as volunteers from the Hindu nationalist outfit Rashtriya Swayamsewak Sangh (RSS) were paraded in chains on the street, has triggered a major political controversy in India, with many on social media questioning the state authorities for allowing such an provocative event.

How was this hate march by PFI even allowed by Kerala govt? For VOTEBANK politics nobody in Secular Lobby will condemn this? ⁦@AmitShah⁩ ⁦@CTRavi_BJP⁩ ⁦ pic.twitter.com/cWykBh6VEY

How was this hate march by PFI even allowed by Kerala govt? For VOTEBANK politics nobody in Secular Lobby will condemn this? ⁦@AmitShah⁩ ⁦@CTRavi_BJP⁩ ⁦@blsanthosh⁩ pic.twitter.com/xJnsgEsEX0

@RatanSharda55 Sir , PFI is trying to create panic and fear among volunteers of RSS in Kerala But they don't know "We are the ancestors of those who suffered extreme torture and yet survived". @friendsofrss pic.twitter.com/EIB9fJxPE3

​Videos purportedly depicting Friday's march in the Malappuram district and shared on social media show participants chanting Islamist slogans while they parade chained men meant to be members of the RSS, an organigation that is considered the ideological parent of the federally-governing Bharatiya Janata Party (BJP).

Kerala is among a handful of Indian states governed by a non-BJP government, with a leftist coalition of the Left Democratic Front (LDF) commanding a majority in the state legislature. The protest march comes as the BJP is trying to make political inroads in the non-Hindi speaking state.

The symbolic march by the PFI commemorated the centennial of the Malabar Uprising, an insurrection by local Muslim farmers against their Hindu landlords as well as the then-British colonial government.

Over 2,300 people are said to have been killed at the time as Muslim farmers targeted government offices and landlords, mostly Hindus, in retaliation for oppressive farm policies, as per official figures. Some unofficial estimates put the death toll as high as 10,000.

The PFI, the organisation behind Friday's event, has been on the radar of Indian investigative agencies for its alleged role in organising protests against Prime Minister Narendra Modi's government over the implementation of the Citizenship Amendment Act (CAA) in 2019 and 2020.

In fact, authorities in India's most populous state, Uttar Pradesh, even demanded a ban on the PFI after 25 of its members were arrested last year for allegedly inciting Muslims against the CAA, a piece of legislation that the Indian government says would fast-track Indian citizenship applications for non-Muslim minorities from the neighbouring countries of Afghanistan, Bangladesh, and Pakistan. Many Indian Muslims fear that the CAA, in combination with several other proposed laws, will ultimately disenfranchise them.

Even the state government of Kerala has in the past reportedly demanded a ban on the PFI.

The PFI, for its part, claims that it is being targeted by the BJP-led federal government for resisting its policies, including the CAA.

Several PFI members have also been found to be linked with terror cases, allegations that raised concerns about the organisation's ideology. Many of PFI's cadre are ex-members of the Students' Islamic Movement of India (SIMI), which was outlawed by the Indian government in 2001 over its role in carrying out terrorist attacks in the country.