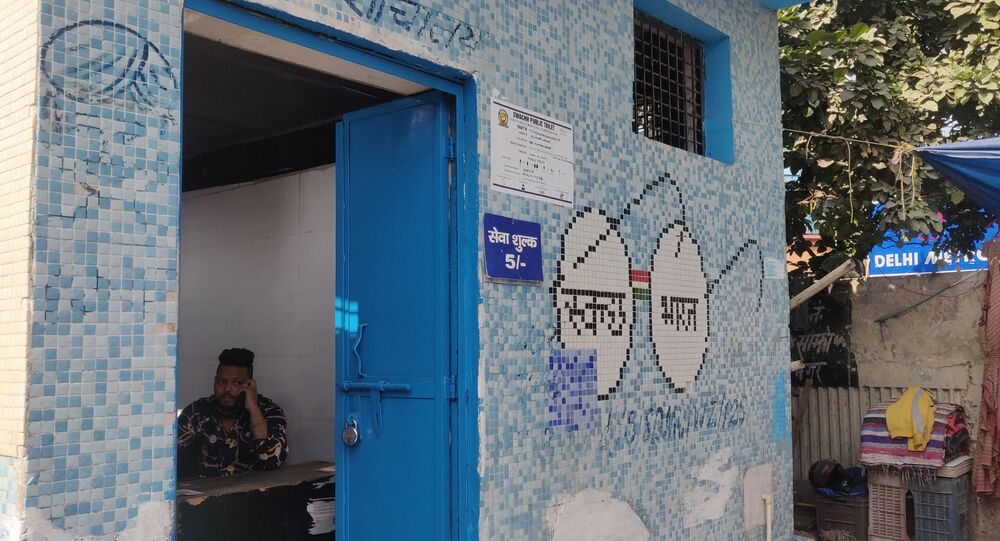 The Government of India’s Swachh Bharat Mission (Clean India Campaign) includes building public conveniences in cities, especially for the desolate, beggars, and migrants who live on the streets and don't have personal washrooms.

With the Indian capital having many people living in slums or without proper houses, attending to nature’s call becomes a daily hardship for most of them. With some local civic body-run public conveniences now charging fees, a lot of these people are returning to the old habit of open defecation.

© CC0
Twitterati Mark 6th Anniversary of #WorldToiletDay With Alarming Facts, Betterment Pledges
Public conveniences, or toilets, were initially declared free of cost for the common person’s use to keep the city clean, as Prime Minister Narendra Modi on 2 October 2019 declared that India had become Open Defecation Free (ODF). Official statistics say the government constructed 110 million toilets across the country between 2014 and 2019.

But 15 months after announcing India as ODF free, slum dwellers in the South Delhi area of India's national capital say they are being charged five rupees ($0.07) per use. This is making it difficult to afford the daily expense.

With many residents having resentment over it, Sputnik visited two sites — the Uttam Nagar East Metro Station local market area and Indira Camp, a slum cluster in South Delhi's Andrews Ganj area — to understand the problems of those affected.

The Uttam Nagar area-located public washroom is surrounded by rickshaw-pullers and street vendors who sell vegetables. "The authorities have started charging money from the past two-three months. We don't know the reason, but they are charging", Bittu Kumar, a rickshaw puller, said.

He also said that they don't use it anymore. "This is a rickshaw stand and we keep moving all day from one place to another. We can use the loo elsewhere".

© Sputnik / Deexa Khanduri
Uttam Nagar Locality
"We hardly make INR 100 ($1.38) a day. Let's suppose that person wants to use the loo two to three times a day, do you seriously think that he can afford to pay 10-15 percent of his earning on the washroom. At least, I can’t", said another bicycle rickshaw-puller named Ashu.

A few people in the Uttam Nagar area said that since the authorities are charging money for using public toilets, many people have started relieve themselves in the open right next to the public restroom’s wall.

"Yes, with less choice, we are forced to defecate in the open. But, what choices do we have other than doing it?" the rickshaw-puller asked.

People here say that they reported their problem to the municipal councillor (local public representative of the civic body). But he told them that the paid use of such facilities was incorporated into the policy last November by the BJP-led South Delhi Municipal Corporation.

"These toilets were constructed under the Clean India Mission and aimed at dissuading people from defecating in the open. Now, if they charge money, the slum dwellers will return to using open areas", he stated.

Why Have Municipal Authorities Started Charging?

An official from the South Delhi Municipal Corporation, who did not wish to be named, confirmed that they are collecting maintenance charges. It is being done as per the modified policy. "As per the policy, if there is no advertisement on [the] toilets' block, then we can charge users for maintenance", he said.

Social activist Ayush Gupta, linked to Project Raahat, an initiative to eradicate open defecation in the urban slums of Delhi, in collaboration with the state government, said, "Ever in the world have you heard that the government launches a social campaign and later they are charging for it?"

“For a long time, we have been telling the government these public conveniences need support in terms of funds for basic maintenance. And, in place of that to sustain themselves, these washrooms are now charging money from the public”, Gupta said.

The activist also pointed out that such improperly maintained public conveniences generally turn into hotspots of infectious diseases. Thus they need government support for funds. Besides, the government charging such poor people will prompt them to rather defecate in the open instead of paying for such a facility every time.

The sanitation conditions in Delhi, especially the slum areas, have only worsened over the decades due to population growth as well as the absence of the required basic infrastructure for it.

The Census 2011 estimate stated that 1.8 million of Delhi's 22 million residents live in slums.

The Census of India defines the term "slum" as an area that is resided in, but is an unsuitable place for human habitation. These places are deemed unfit, a hazard to human health and safety, due to lack of space, ventilation, cleanliness, and sanitation, among other factors.

According to the Delhi Urban Shelter Improvement Board (DUSIB), which is a state government body, there are 23,000 public toilets in the city (including toilets in slums and illegal colonies).

But due to inadequate infrastructure, Delhi has constructed the lowest number of household toilets - 458 (from 2014 to 2019) - across all Indian states.

Dictator's 'Throne': Toilet Seat Where Hitler 'Put His A**' Auctioned for Thousands of Dollars