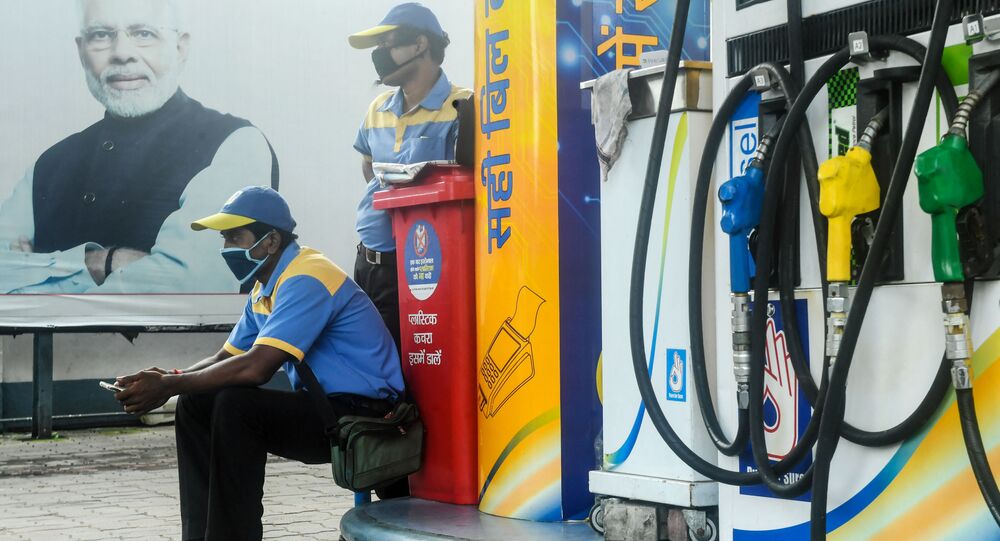 India’s federal government and the governments in different states raise huge sums of taxes on fuel - somewhere between 55 and 60 percent of the price of petrol or diesel is tax. The cost of a litre of petrol crossed the INR 100 ($1.38) mark in parts of India such as Madhya Pradesh and Rajasthan on Friday.

The government is facing the fury of opposition parties, social media users and people on the streets.

To understand how ordinary working Indians are affected by the soaring petrol prices, Sputnik speaks with a few citizens on their way to the office.

"It's clearly a 25 percent hike. This is corona time, and most of the companies are not giving a rise in salary or yearly bonus. If the price keeps increasing, I may have to use public transport like the Delhi metro," he added.

However, many women passengers feel that although using public transport is alright for males, it is not an option for women after sunset or early morning.

The metro trains run from 6am until 11 pm.

According to Ashima, men can ask for a lift from an unknown driver or take part in a cab share. But women in Delhi-NCR, for security reasons, mostly avoid taking these cabs.

"Let's be practical, the Metro is not the real option. It doesn't provide last-mile connectivity options. Government needs to take some real steps such as cutting taxes," Ashima says.

Delhi Metro is spread out over 390km in Delhi-NCR and has 285 stations. Most of the people commuting on the metro take cars and rickshaws to reach the nearest metro station in their area.

© AFP 2021 / NARINDER NANU
A fuel pump attendant fills a motorbike with petrol at a gas station following a hiked of petrol and diesel prices by state-run Oil Marketing Companies (OMC), in Amritsar on February 13, 2021

In an attempt to avoid the people's anger, Prime Minister Narendra Modi on Thursday blamed his predecessors for the rocketing fuel prices.

He claimed that if the previous governments had focused on reducing the country's energy import dependency, the middle class would not have been burdened today.

"Indian consumers didn't enjoy the benefit as the government increased the tax revenue at that time. How can they blame the previous government for it now?" Agarwal asked.

"It's so easy to blame every bad thing on Congress. [But the BJP] have been ruling for the past seven years - it's high time they own up to their responsibilities," he added.

According to government data, tax accounts for about 55 percent to 60 percent of what consumers pay at the petrol pump.

Earlier this week, a group of Indian Youth Congress (IYC) activists staged a demonstration at New Delhi against rising petrol, diesel, and cooking gas prices and demanded that the government roll back the hike.