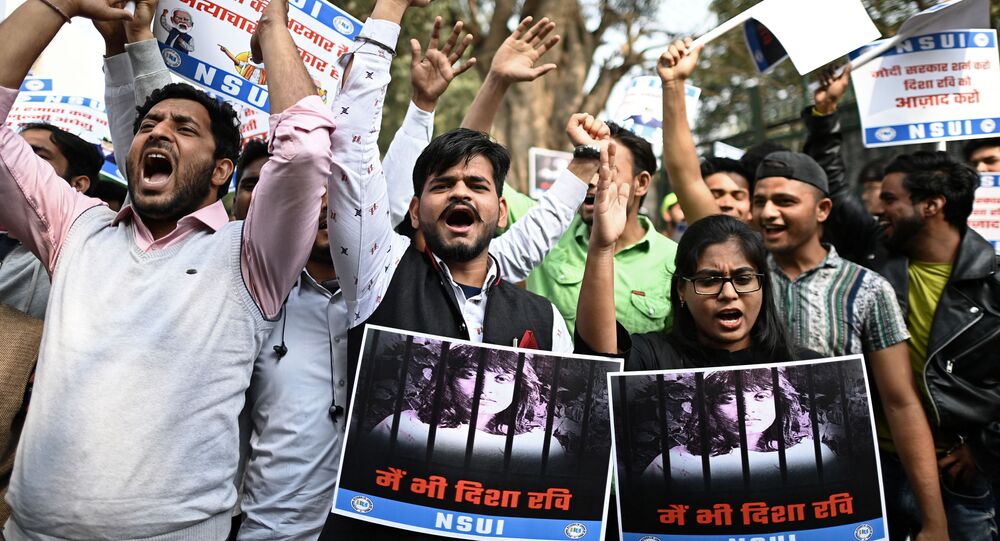 On Saturday, the Delhi Police arrested 21-year-old climate activist Disha Ravi for allegedly being involved in sharing the "Greta Thunberg toolkit," which the authorities claim was intended to spread disharmony.

Indian climate activist Disha Ravi has asked Delhi High Court to stop the police from leaking any material linked to the investigation into her alleged sharing of a protest "toolkit" to help the country's farmers. Ravi is worried about her private chats and communication falling into the hands of the media.

In her petition filed through advocate Abhinav Sikri, Ravi wants the Ministry of Information and Broadcasting to take action against local media and satellite TV channels under the Cable Television Networks (Regulation) Act, 1995.

"The petitioner has preferred this petition as she is severely aggrieved and prejudiced by the media trial surrounding her arrest and the ongoing investigation, where she is being viscerally attacked by the Delhi Police and several media houses…,” says the plea.

She's filed the plea “on the basis of leaked investigative matter and prejudicial press briefings, which is grossly violative of her right to a fair trial and presumption of innocence."

Ravi says her fundamental rights to her privacy have been violated and she's seeking protection from Article 21 of the Indian Constitution.

"There is no clarification in any of the tweets or the news reporting to the effect that disclosure statements or ‘admissions’ made whilst in police custody are wholly inadmissible in evidence and have no basis in law.

“As such, in view of the facts described herein, it is highly likely that the general public will perceive these news items as being conclusive as to the guilt of the Petitioner," the plea adds.

Ravi has been charged with sedition by Delhi Police for editing two sentences of a toolkit shared by Swedish environmental activist Greta Thunberg.

Earlier this month, Thunberg shared the toolkit amid the ongoing farmers' protests on the outskirts of Delhi. The document had called for people to support the farmers through various means, including protesting outside embassies and the homes of prominent businessmen.

According to the police, the toolkit aimed to spread disharmony against the Government of India and upset various social, religious, and cultural groups.

It also contained a particular section that mentions "digital strike through hashtags on or before 26 January, tweet storms on 23 January onwards, physical action on 26 January and watch-out or join farmers march into the city of Delhi and back to borders."

Farmers' Protests in India: Digital Toolkits Not a Crime, But a Way to Raise Awareness, Analysts Say