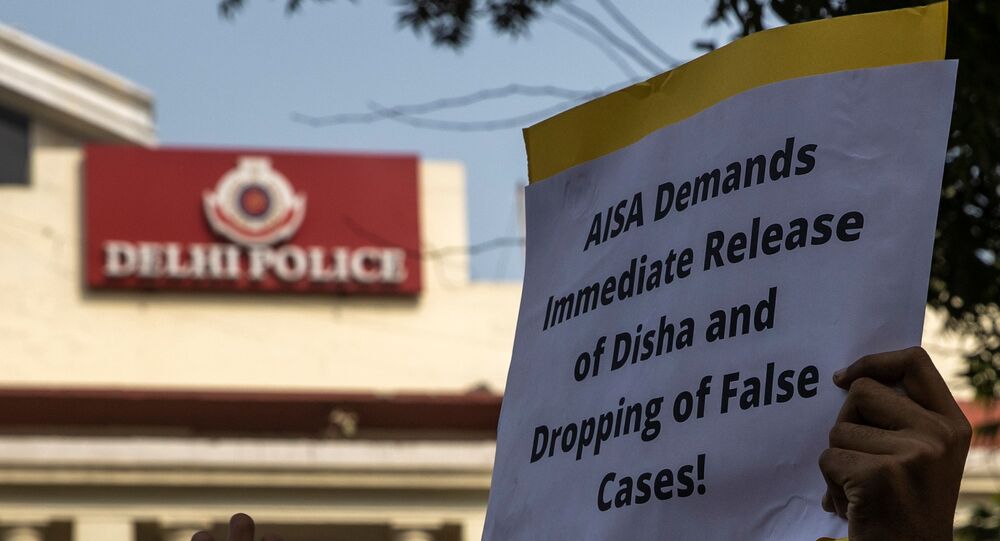 Bengaluru-based environmental activist Disha Ravi was arrested on Saturday night by Delhi Police in connection with a tweet by Swedish climate activist Greta Thunberg, who shared a "toolkit" designed to aide the ongoing farmers' protests in India.

The Delhi Commission For Women (DCW), a government organisation tasked with investigating possible violations of women's rights, sent a notice to Delhi Police on Tuesday in connection with the arrest of 22-year-old activist Disha Ravi.

DCW alleged that Ravi "was taken to Delhi from Bengaluru by the Delhi Police with no disclosure of her whereabouts, not even her parents (were told)."

According to the Indian law, when a person gets arrested by police from another state, a local police station has to be informed. The Delhi Police are maintaining that all laws and regulations were observed on their part during the arrest.

"It has been further alleged in media reports that Ms. Disha Ravi was produced before the court in Delhi without a lawyer of her choice being present in the court," the copy of the notice obtained by Sputnik, further reads.

"This is a very serious matter," observes DCW.

The commission also asked Delhi Police to explain the reason behind the violations by 19 February.

Meanwhile, Delhi Police Commissioner Alok Verma on Tuesday reiterated that Ravi's arrest was conducted in accordance with the law and denied any lapses in arrest.

© AP Photo / Rafiq Maqbool
Activist Disha Ravi's Arrest Over 'Greta Thunberg Toolkit' for Farmers' Protests Blows up Twitter
The online toolkit was thrust into the global spotlight after teen environmental activist Greta Thunberg shared it on Twitter earlier this month, as she expressed her solidarity with protesting Indian farmers who have been demanding the repeal of three new federal farm laws.

While Thunberg’s tweet was later deleted and an updated one posted subsequently, the Delhi Police nevertheless launched a probe and booked unnamed persons for sedition (Section 124A), wantonly giving provocation with intent to cause riot (section 153), promoting enmity between different groups (section 153A) and criminal conspiracy (section 120B).

The police claim Ravi is also responsible for editing two sentences of the toolkit.

Thousands of Indian farmers are protesting at the New Delhi border, demanding the scrapping of three farm laws passed by the Narendra Modi government in September last year.