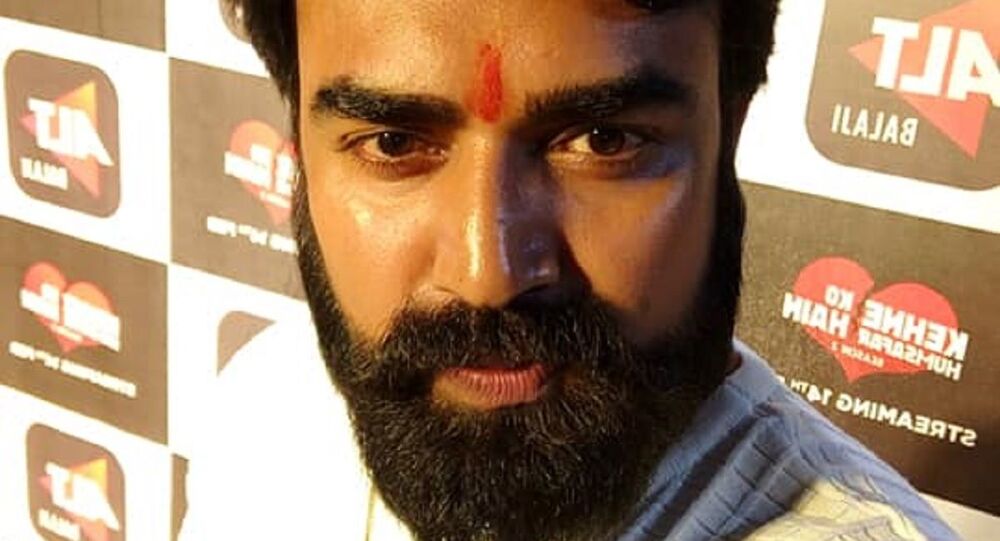 With a dream of pursuing a career in acting, Sandeep Nahar moved to Mumbai from Haryana state in 2009. After struggling for years in Bollywood, he had his big break in 2016 and starred with the late actor Sushant Singh Rajpur in the movie ‘MS Dhoni’.

The reported suicide of Bollywood actor Sandeep Nahar, who was found hanging at his home in Mumbai on Monday, has taken the internet by storm.

Hours before purportedly ending his life, Sandeep posted an online suicide note as well as a video on his Facebook account, in which he opened up about having a troubled marriage to his wife Kanchan Sharma.

Nahar, who suffered from mental health problems, explained why he was driven to take such a drastic step; he accused his spouse of “blackmailing” him and picking fights almost every day on “issues of the past”.

“It’s not her (Kanchan) mistake because her nature is such that she feels everything is normal, but it’s not normal for me. In the last two years, my life has changed completely. However, I have never shared anything with anyone. People feel that everything is absolutely fine in my life… Kanchan has threatened to commit suicide at least 100 times,” Nahar said.

Urging people to not hold his wife and family responsible for his death, Sandeep shared that he had experienced suicidal tendencies many times and considered ending his life the only solution to all his problems.

“I would've died by suicide a long time ago but I chose to give myself the time and hope that things would get better, but they didn't. I now have nowhere to go. I don't know what awaits me after I take this step, but I've been through hell in this life," he wrote in Hindi.

At the work-front, Sandeep mentioned that he faced a lot of ‘politics' in Bollywood as he was replaced in projects after everything was finalised and also experienced a lack of professionalism in the Hindi film industry.

While the police are investigating the case, netizens have taken to social media and are demanding that measures be taken against his wife for allegedly abetting his suicide.

Sandeep Nahar shares his tails of suffering in a toxic relationship just before he dies by suicide.
He says that u can take any other stress but not this one which is given by a psychotic, controlling, abusive wife, he tried enough but he can't take it anymore.
RIP Sandeep 🙏 pic.twitter.com/TuJCrpzZ5u

SHOCKING—Sandeep Nahar, Sushant Singh Rajput’s co-actor in MS Dhoni “dies by suicide”. He penned a long suicide note along with a video just 4 hours ago on Facebook. pic.twitter.com/RXiRmU75HQ

#MSDhoni & #KESARI famed #SandeepNahar allegedly committed suicide due to fear of threats of False Allegations. It's high time to realize that male issues are real, they are human too!
Mental trauma can be faced by anyone & yes false allegations can take lives!
Om Shanti 🙏💐 pic.twitter.com/THNqUwPH1k

Actor Sandeep Nahar dies by suicide, In a strongly worded suicide note, he mentions how his life had become a living hell because of wife & mother in-law, there was no self respect & peace & that whatever it would be after death, it'll be better than this life.#HusbandSuicide pic.twitter.com/OxMJdufU3N

One more male victim of domestic violence suicide's due to torture & threatening of (Wife) Kanchan.
She threatened him to commit suicide at least 100 times & put them into fake cases.
Actor #SandeepNahar writes.#ArrestKanchan
This is story of millions men in India
Below👇👇 pic.twitter.com/NZhPPakG7e

This is shocking!
Abuse of men is increasing in India. Women often play victim card and getaway misusing law & order at their advantage.
Will the @MumbaiPolice #ArrestKanchan for domestic violence and abetment to suicide ? #JusticeForSandeepNahar https://t.co/J1dqKKsdBK