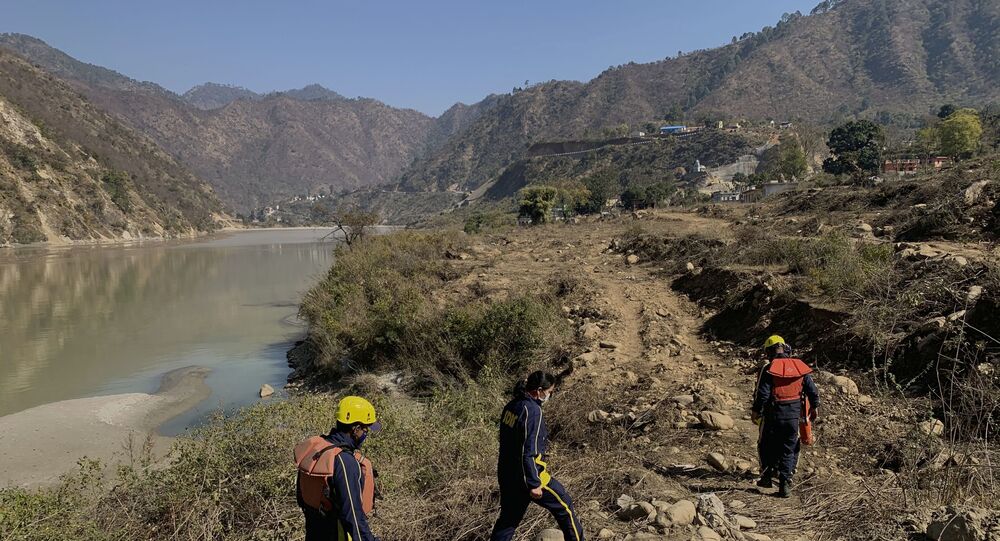 On Sunday, a portion of the Nanda Devi glacier broke off in the Indian state of Uttarakhand, triggering an avalanche and flooding in the Dhauli Ganga, Rishi Ganga, and Alaknanda rivers that washed away hydroelectric stations and homes.

With as many as 36 bodies already recovered from different areas affected by the glacier burst in Chamoli district of Uttarakhand, rescue teams are working around-the-clock in search of 168 people who are still missing.

Speaking to Sputnik, a senior official from India's National Disaster Response Force stated that for the past six days their teams along with several other agencies have been working to save lives.

"At this point of time, no one can tell how much time the operation will take. In total, 168 people are missing, 36 bodies have been recovered so far while we are looking for others. Our first and foremost priority is to save the people and the teams are doing their level best", a senior NDRF officer said, requesting anonymity.

The Indo-Tibetan Border Police, the NDRF, the State Disaster Response Force, Indian Army, and local police along with several other agencies are carrying out the rescue operation.

The officer speaking further about the difficulties faced on the ground stated that this is a developing situation and an unstable landscape.

"Sometimes the operation has to be stopped for several hours as alerts are raised due to the rising water levels in nearby rivers. Boulders are creating new problems for the rescue teams, while the operations inside the tunnels are done through machines and clearing the debris manually inside the tunnel during the night is a little challenging due to the slush. The response strategy keeps changing according to the developing situation", he said, adding the terrain is a huge factor hindering the rescue process.

Meanwhile, police officials who are also helping the rescue teams, stated that they are working as support.

"Our teams have been providing support to the main agencies carrying out the rescue work. Our personnel are moved around in the nearby villages and making sure about the safety of people and basic amenities. We have also got several complaints of animals being missing after the flood", said Yashwant Singh Chauhan, Superintendent of Police, Chamoli district.

He further mentioned that several bodies recovered remain unidentified and that personnel are circulating images in WhatsApp groups for identification.

Uttarakhand Director-General of Police (DGP) Ashok Kumar had informed in a statement that DNA samples of the bodies recovered after the glacier burst thre are being preserved by state officials.

"We are preserving DNA samples of the recovered bodies. Out of total dead bodies recovered, we have so far identified 10 bodies", the statement read.

The state government has also appealed to tourists to visit the state without fear.

"The impact of the Chamoli disaster has been mainly from Raini village to Vishnu Prayag and there has been no impact anywhere else in the region. [...] danger has been averted and everything is normal", said state tourism minister Satpal Maharaj.

Indian Home Minister Amit Shah along with the state chief of Uttarakhand are closely monitoring the situation and have assured all the necessary help will be received.