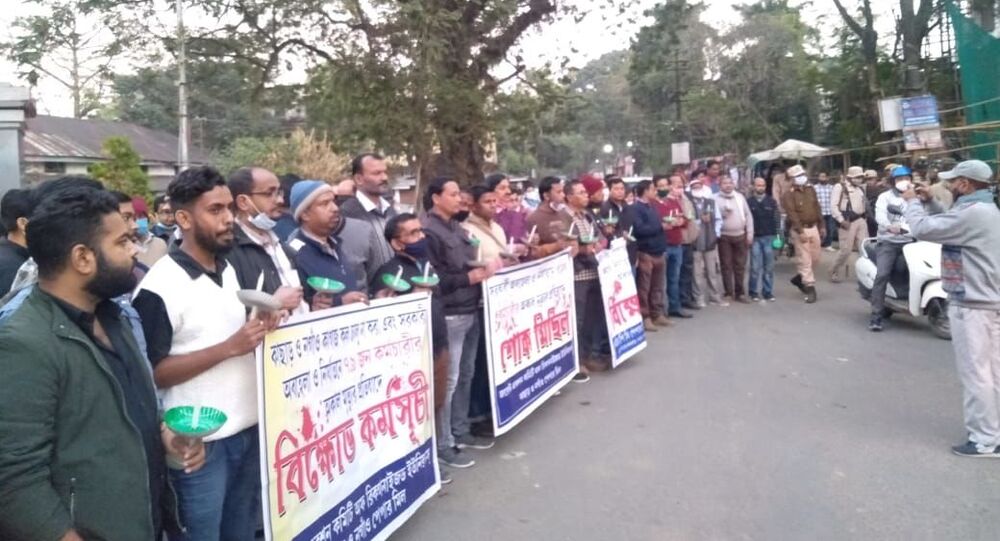 Ripun Bora, a parliamentarian for opposition party Congress, highlighted the sufferings of workers at two defunct mills in Assam in September. A week later, across the political divide, BJP lawmaker Rajdeep Roy took up the cause, alerting government to the fact that the staff need to be paid. Several months on, the workers continue to struggle.

Thousands of families in India's northeastern state of Assam face endless poverty and a bleak future, as their two paper mills have not functioned since 2015 and 2017.

Employees of these mills say they are in limbo as they cannot even take up other jobs since they have yet to be made redundant officially.

Prime Minister Narendra Modi promised a future for both mills in the run-up to the 2016 elections which led his Bharatiya Janata Party (BJP) to secure power in this north-eastern state with a historic win.

Until now, nothing has been done. However, the state's next legislative assembly elections are looming and are meant to take place in April or May.

On 7 February, Prime Minister Narendra Modi was in Assam for an election rally and he proposed setting up a technical college and a medical college in the state to create more job opportunities.

However, about 6km from the rally, a group of mill protesters were chanting slogans against Modi, reminding him of his electoral promise in 2016 - to revive the two paper mills run by the government-owned Hindustan Paper Corporation Limited (HPCL).

Staff at CPM stopped receiving their salaries in October 2016 and two months later Nagaon employees joined them which means that up to 49 months' salaries have yet to be paid.

Speaking with Sputnik, Dipak Chandra Nath, general-secretary of the Cachar Paper Mill Officers' and Supervisors' Association, said: "The mills collectively provided employment to 6,000 people both permanently and on contract. Indirectly, it employed 200,000 people in the state.

"The industry was not only providing direct employment to thousands of youths but also collateral work - packaging, bamboo farming, ancillary and limestone industry - was set up in the state," Nath stressed.

"During the Assam assembly elections in 2016, the prime minister promised that the paper mills would re-open. He made the statements while campaigning. But nothing happened. The paper mills' revival plan in the [Prime Minister's Office] has been awaiting approval for the past two years," he added.

According to Manabendra Chakraborty, chief convenor of the HPC Paper Mills Revival Committee (HPCPMRAC): "So far, 81 people have died for various reasons including suicide and cardiac arrest. And a few others who have been unable to afford treatment."

The matter drew widespread public attention in 2019, when a 55-year-old senior engineer of Nagaon Paper Mill, Biswajit Majumdar, in his suicide note wrote, "I Quit. [Government of India] is responsible for my death."

Chakraborty claims that more than 40 workers have died from trauma and stress-related complications and lack of funds to get proper medical treatment.

"Many more will die if the government does not take prompt steps to pay the salaries and revive the mill. Someone needs to do something. There are not many opportunities in the state," he stressed.

Why Were the Mills Shut Down?

Both the paper mills had run at a loss since 2008 because there was a shortage of raw materials such as bamboo and coal.

Explaining the reason for the industry's accumulated losses, Assam state journalist Tamanna Naseer said: "In 2006-7, because of a shortage of bamboo in the state, the industry had to import pulp from Indonesia and Malaysia, which increased the cost of production."

The shortage was caused by a condition called "gregarious flowering" - something which happens in bamboo every 40 to 50 years when all the members of a particular bamboo die after flowering in some kind of mass suicide.

"We will visit all 126 districts of Assam state and urge people not to vote for BJP. Vote for any party except BJP. They ruined us," says Chakraborty.

Targeting the state’s ruling BJP, state Congress leader Bobbeeta Sharma says joblessness is the most serious issue in the state. "Forget about creating new jobs in the state, the BJP government has failed to maintain the existing number."

Attacking Assam’s state chief Sarbananda Sonowal, she says: "Sonowal only gave fake assurances in the past five years and a fake hope that both paper mills will be revived."

Federal Minister Nirmala Sitharaman recently announced a special fund of $467 million (INR 34 billion) to be spent on road infrastructure development in Assam and a welfare package for the state's tea workers. However, it did not mention any relief for mills workers.

Assam state BJP leader Dilip Kumar Paul maintains that the government is aware and concerned about the mill-workers' plight and he hopes that the issues will be resolved soon.

He blames the previous Congress government for the mills' pitiable condition for not doing anything when the businesses started posting losses.

That, however, is of little consolation to the suffering workers and their families. Thus, they are determined to vent their anger at the BJP when its leaders or supporters return to the streets during polling this time.