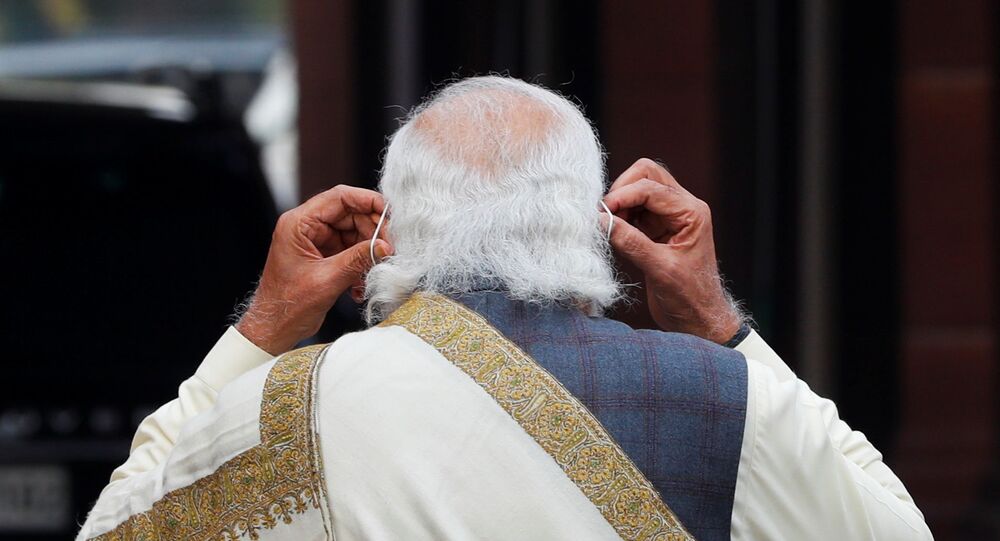 Indian Prime Minister Narendra Modi is often called out for an unethical and unfair approach towards Muslims in the country, but he only had words of praise for long-serving Muslim politician Azad.

During the ongoing Rajya Sabha (Upper House) session in the Indian Parliament, On Tuesaday PM Modi bid a teary-eye adieu to Ghulam Nabi Azad, a Congress veteran and former state chief of Jammu and Kashmir who is retiring after a long tenure as Congress leader in Rajya Sabha.

Recounting a terror attack that killed eight people in Modi’s home state Gujarat during the Amarnath Hindu Pilgrimage in Jammu and Kashmir in 2017, the Indian PM recalled how Azad helped people during the incident.

“I will never forget Shri Azad's efforts and Pranab Mukherjee's efforts when people from Gujarat were stuck in Kashmir due to a terror attack. That night...Ghulam Nabi Ji called me...," PM Modi remembered, trying to hold back tears.

"He sounded concerned like people are concerned about their own family members. That is the kind of feeling he showed," Modi continued. Politicians thumped tables as the PM cried.

"Power comes and goes. But how to handle it...," PM Modi saluted the Muslim Congressman, as tears filled his eyes.

I have known Shri Ghulam Nabi Azad for years. We were Chief Ministers together. We had interacted even before I became CM, when Azad Sahab was very much in active politics. He has a passion not many know about - gardening: PM @narendramodi

​A video clip of PM Modi’s heart-felt farewell to his rival party leader has gone viral on social media.

Prime Minister @narendramodi gives a powerful yet emotional farewell to Ghulam Nabi Azad. Recalls receiving his call when both were CMs after Gujarati tourists were killed by terrorists in Kashmir and how he called in tears like a family member to inform. pic.twitter.com/zoovG3hfts

Many netizens have been moved by the speech while the others say it's too dramatic.

@narendramodi @PrernaMedia @SwarajyaMag
A beautiful,farewell speech given by our Honble.
PM.Modiji in Rajya sabha today to 4 MPs.Modijis tearful,emotional speech while speaking about Ghulam Nabi Azad ji is really very heart touching.This is the soft divine heart of our PM🙏. https://t.co/6nNZqGxtkR

In rajya sabha today PM @narendramodi ji broke down while bidding farewell to Ghulam Nabi Azad ji shows the real spirit of democracy .. it's not about the people and party it's about Motherland 🇮🇳🇮🇳
Bharat Mata ki jai 🇮🇳🙏#RajyaSabha #GhulamNabiAzad

This. Is. Weird. PM Modi crying because Ghulam Nabi Azad is retiring from Rajya Sabha. Somebody remind Modiji that he campaigned on “Congress Mukt Bharat”. https://t.co/DhwUKu1fAc

Today #KanganaRanaut was boasting she is such a great actress and no one to challenge her but..... https://t.co/tAAFGpP6kS

In 2019, Modi said, "I think Azad Sahab is having a blurred vision. Maybe he is seeing everything from political spectacles.” Modi was replying in the Parliament when Azad took a jab at the prime minister's "New India" vision saying "old India" had no hatred, anger, and lynchings.