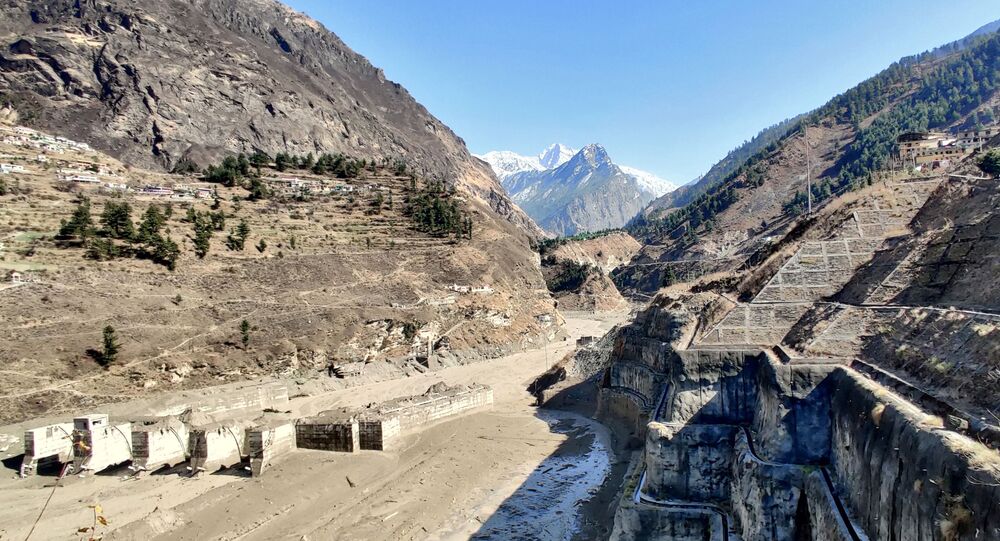 On Sunday, a breakaway glacier in the Rishiganga Valley in the Indian state of Uttarakhand triggered a massive flood that hit two hydropower projects, claiming at least 14 lives, with over 170 still missing as of Monday afternoon.

The construction of dams in India’s Uttarakhand state, where a breakaway glacier wreaked havoc on Sunday, has continued despite local residents filing public interest litigations claiming that the unauthorised use of explosives is damaging the delicate ecology of the Himalayas.

Locals had protested against the building of the Rishiganga hydroelectric power project – which was washed away by the flood – during its construction in 2005.

Damage to area's ecology was flagged in a public interest litigation filed by local resident Kundan Singh in the Uttarakhand’s High Court in 2019. It was alleged in the petition that “unfair and environmentally hazardous practices by private firms were damaging the sensitive areas around protected biosphere reserves."

The petition, which is still pending in the state’s High Court, said that private firms were  “using explosives and blasting the mountains for mining.”

This is not the first time that people in the mountainous state have had suffered from disasters similar to the one that unfolded over the weekend.

In 2013, a cloudburst in the state’s Kedarnath, a famous pilgrimage site, led to flooding that killed over 5,000 people.

The Supreme Court took suo moto cognisance [action taken by a government agency, court or other central authority on their own apprehension] of the natural disaster and in 2013 ruled that no new hydroelectric power projects should be built in the state.

This stalled 69 projects planned to be constructed in the state – 24 of which had been granted environmental clearance.

The Uttarakhand state government, however, is determined to pursue hydroelectricity production and filed an affidavit in the Apex Court on 28 August, 2020 saying that “the state has been facing acute power shortage in the recent times and forced to purchase electricity casting an additional burden on the finances of the hilly state."

On directions of the Apex Court, a scientific assessment of the cumulative impact of hydropower plants in the state was done by experts, who warned that large scale damage could occur downstream due to structures built for hydroelectricity generation and the fragile status of glaciers.

Subsequent reports filed by experts have also indicated that the state should not allow hydroelectric power projects.

Hhydro geologist Ritesh Arya told Sputnik, “The disaster which happened at Chamoli is not a result of a single event but of a process which started 11,000 years ago from today when global cooling and glaciation was at its peak. All the sediments were weathered and eroded during global cooling times.”

“The global warming process increased the transportation of sediments and water and a time comes when these loose debris walls formed during global cooling times cannot hold water and once that threshold is reached these walls of glacial lakes rupture releasing huge amounts of water," said Ritesh Arya.

Arya said that it's vital to set up observatories for these high altitude glacial lakes where loose walls are formed creating reservoirs, and to monitor the hydrological changes.

“These mishaps are totally avoidable,” he told Sputnik.