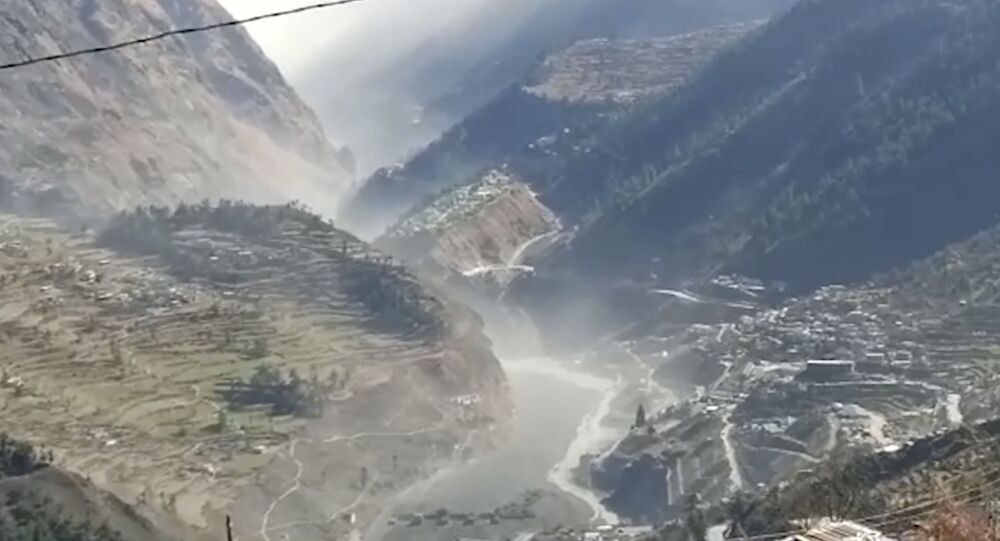 Part of the Nanda Devi glacier broke off on Sunday morning in Uttarakhand state's Chamoli district in India, triggering an avalanche and flooding. Several are reportedly dead and scores missing.

Over 150 people are reportedly missing after a massive flood wreaked havoc in the Chamoli district of India's Uttarakhand state. It was triggered when part of the Nanda Devi glacier broke off early on Sunday causing an avalanche.

After videos of the carnage emerged online, several Bollywood celebrities took to Twitter to pray for those affected.

Actor Randeep Hooda, who is also a UN environment ambassador and wildlife conservationist, called the flood – which wiped out several districts in Uttarakhand – a "man-made disaster"

​Almost 40 hydropower projects – including many dams – with a total capacity of 3,971 MW operate in Uttarakhand.

Actress and climate change activist Dia Mirza said that the disaster was caused by the building of "too many dams in the Himalayas."

After seeing videos of the carnage, producer Ronnie Screwvala wrote about the “callous” approach of people towards climate change and global warming.

​Many other stars have also given offered their two cents on the tragedy, tweeting condolences.

A total of 11 villages have reportedly been affected and five bridges destroyed. Many villages around the Chamoli district have been evacuated and several districts near the Ganges River have been put on high alert.

​Hundreds of security personnel and rescue teams from the Indo-Tibetan Border Police (ITBP) and Indian Army continue to search for the missing.

​A team from the Defence Research and Development Organisation (DRDO), which monitors avalanches, has been flown in for surveillance and reconnaissance.