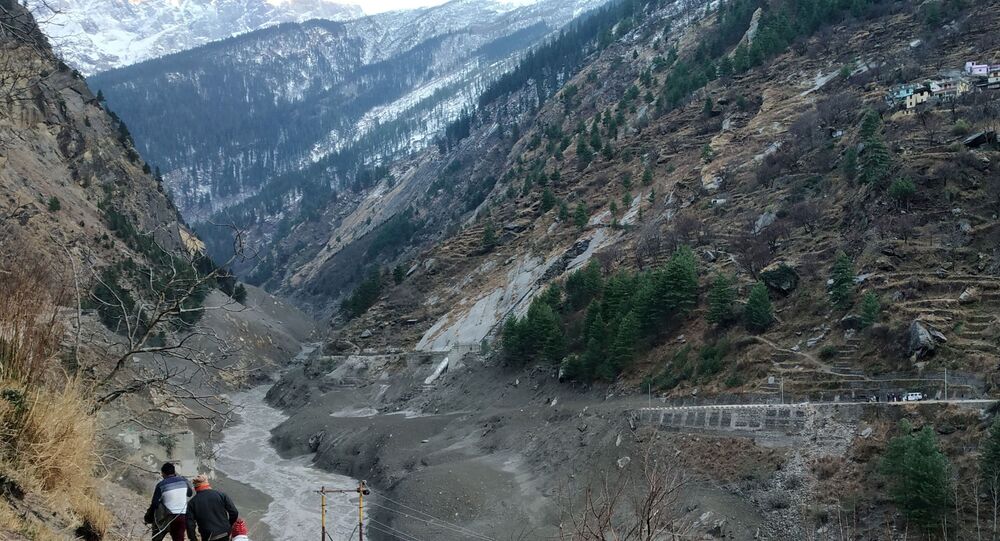 A glacier burst in India's hilly Uttarakhand state on Sunday morning triggered floods leading to damage to the Rishi Ganga Project downstream. Nearly 150 labourers at the dam construction site were reported missing. The incident has also led to landslides and tunnel blockages in the ecologically sensitive Himalayan region.

Hindu monks, who have been staging fast-unto-death protests against the “unhindered” construction activity on the upper reaches of the Ganges River in its origin state Uttarakhand, say that Sunday’s glacial burst in the Chamoli district was a tragedy which was “waiting to happen”.

“We have been demanding a freeze on the construction activity around the Chamoli district since 2013. However, the government has not listened to our concerns and continued with the construction of hydel-power projects. Now, this is the wrath of nature”, Swami Shivanand Saraswati, the 76-year-old founder of Haridwar’s Matri Sadan, a spiritual organisation fighting against environmental destruction and corruption, told Sputnik.

He was referring to warnings around the construction activity on the Dhauliganga River, the site of Sunday’s dam breach in the wake of a glacial burst, in a government-appointed expert committee report in 2017.

The federal report findings called upon the government to freeze all the hydel dam construction activity on the upper reaches of the river, and expressed concern over 69 dams that were then under construction.

“Over the last few years, the frequency and intensity of disasters in the state of Uttarakhand has consistently increased”, the report says, blaming landslides in the wake of rainfall as one of the major environmental disaster causes.

Dhauliganga, the location of the affected Rishiganga Water Project, is one of six smaller tributaries that finally meet to form the Ganges River in the Himalayan state of Uttarakhand. The river holds a place of high reverence in Hindu scriptures and its conservation is an emotive topic for many Hindu monks who live along the river.

"The environmentalists have been demanding a complete end to hydel power projects on the upper reaches of the river. This is just nature's way of responding. I only hold the government responsible for this. The warning signs were there in the 2013 tragedy", says Singh.

Uma Bharti, a former federal water resources minister under Prime Minister Narendra Modi and a monk leader, has also expressed concerns over the dam construction spree in the "ecologically sensitive" region around the Ganga's upstream.

"I am downstream in Haridwar now. But even here, there is a flood alert. This shows how environmentally sensitive the upper reaches of the Ganga are", she said in a series of tweets after Sunday's incident.

Monks in Uttarkhand state have been staging hunger strikes since 2008 to pressure the government into stopping the construction activity and halting the sand mining on the upper reaches of the Ganga River.

Swami Shivanand accuses the central government of “dishonouring” the promises it made to monks of the country in the past.

© AP Photo
Uttarakhand Flood: Eyewitness Says Swollen River Wiped Out Everything in its Path
Shivanand broke his five-week-long hunger fast last August after being assured by the federal government’s National Mission for Clean Ganga (NMCG) agency that the ongoing dam construction activity would be frozen and sand mining operations would be suspended.

Conservationists have often accused the Bharatiya Janata Party (BJP)-led government of flouting a previous government order of classifying the Bhagirathi ESZ as an ecologically sensitive area that should be prioritised for conservation.

New Delhi, on the other hand, is currently constructing one of the largest road-widening programmes in the Himalayas, the $1.64 billion, 889-km-long Char Dham project, which passes through the Bhagirathi ESZ.

Another Hindu monk, Swami Atmobodhanand, was on a 194-day hunger strike in 2019 in the town of Haridwar. He wanted the authorities to abide by their commitment to “restore” the flow of the Ganga River by ending all “commercial activity” on the upper reaches, including the development of hydel projects.

In December 2019, a woman seer named Padamavati also fasted in Haridwar over the same demands. A month later, she was detained and her fast was allegedly forcibly ended.

In 2018, Professor G.D. Agarwal, an environmental engineer-turned-monk, died following a 111-day hunger strike to protest the “increase in” construction activity on the Ganga River in Uttarakhand over the past few years.

© REUTERS / REUTERS TV
Watch Massive Flood Wreak Havoc in Uttarakhand, India
In a note penned few days before his death, he accused the current government of being insensitive to “Maa Ganga” (Mother Ganges) and just cashing it for commercial gains, including selling hydel power and infrastructure development.

Back in 2008, a similar fast by Agarwal forced the then Congress-led government to declare some areas around the upper reaches of the Ganges as ecologically sensitive zones. Days before dying due to his hunger strike, Prof. Agarwal also accused the current government of flouting environmental concerns that he said were responsible for disastrous landslides triggered after a cloudburst tragedy in 2013.

Over 5,000 people were left dead after heavy rainfall in the Uttarakhand state led to landslides and infrastructural damages, which has often been described as India's worst natural calamity since the 2004 tsunami.