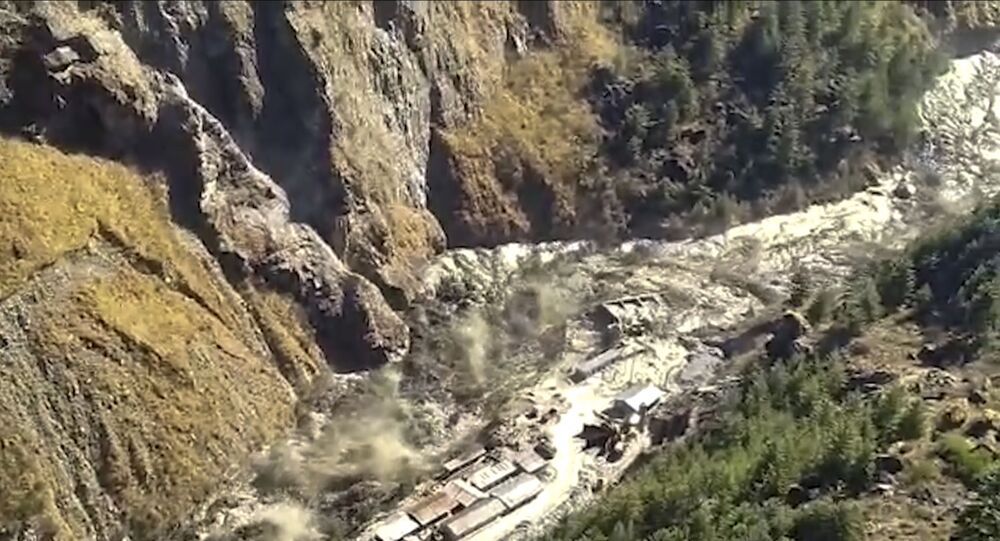 A massive flood hit the Indian state of Uttarakhand after the banks of the Dhauliganga River burst on Sunday morning – earlier an avalanche caused by a breakaway glacier smashed into a dam higher up the river.

One of the Tapovan Power Project's dams – located in the Chamoli district of India's Uttarakhand state – has been severely damaged after a breakaway glacier triggered an avalanche and flooding on Sunday.

“We’re lucky that it's Sunday. Had it been a working day... more than 1,700 people work in that location,” Yash Pokhriyal, a manager at the State Bank of India (SBI) in the Joshimath district told  Sputnik.

He added that the swollen Dhauliganga river wiped out everything in its path – "more than five hotels by the river bank were swept away."

The disaster reminded many locals of a similar flooding that hit Uttarakhand state in 2013.

​"The view is scary. Low-lying areas are inundated, and houses were filled with muck deposited by floodwaters. I have never seen so much flow in the river before. This reminds me of the 2013 floods," Vinod Nautiyal, a retired army man who lives in Karanprayag city in the Chamoli District, said.

Thousands of pilgrims lost their lives eight years ago – a total of 3,886 people went missing and only 699 bodies were recovered.

Am constantly monitoring the unfortunate situation in Uttarakhand. India stands with Uttarakhand and the nation prays for everyone’s safety there. Have been continuously speaking to senior authorities and getting updates on NDRF deployment, rescue work and relief operations.

I had cancelled all my programs & have reached the affected area for 1st hand assessment of situation. Chamoli district administration is being helped at all levels of the government. There is no cause for panic as of now & I appeal everyone to not believe rumours. #Uttarakhand