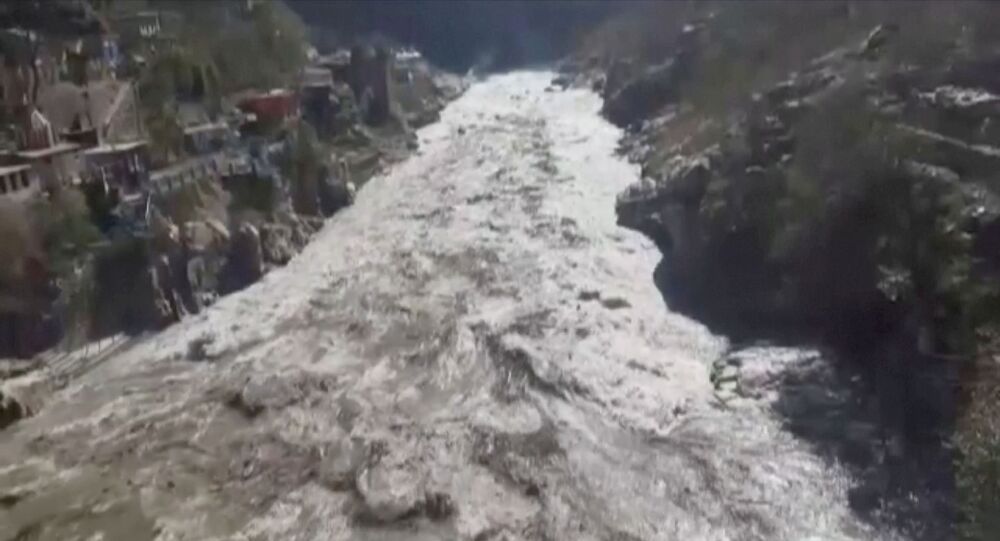 A glacier burst in the Chamoli district in the Indian state of Uttarakhand has triggered an avalanche and flooded the Dhauliganga River in Joshimath. A high alert has been issued for the Rishikesh and Haridwar districts of Uttarakhand.

Shocking visuals of a massive flood in the Dhauliganga River in India's Uttarakhand state have made their way to the Internet.

The incident took place on Sunday morning after a glacier broke off in Joshimath city, where the Rishiganga power project was going on, causing a rise in the water level in the Dhauliganga River.

According to officials, about 150 labourers working on the power project are missing. A high alert has been declared in the Chamoli district, and hundreds of Indo-Tibetan Border Police (ITBP) personnel have been rushed to carry out rescue operations.

"A disaster has been reported from Chamoli district. The district administration, police and disaster management departments have been directed to deal with the situation. Do not pay attention to any kind of rumours. Gov't is taking all necessary steps", Uttarakhand Chief Minister Trivendra Singh Rawat told the Indian newswire ANI.

Scenes from area near my home town , Hope every one is safe 🙏 whole Dam is awash with flood . #Chamoli pic.twitter.com/BkSllVJITN

#Breaking A massive sudden floods in Dhauliganga after a huge Himalayan glacier collapse in Reni village in Uttarakhand which destroyed many river bankside houses now. This is real #ClimateEmergency.
My thoughts & prayers with the people of Uttarakhand.🙏🏻pic.twitter.com/mMHjyODbq4

Videos from the nearby Reni village have also surfaced on the Internet, showing how floods have destroyed many riverside houses due to either a cloudburst or the breach of a reservoir.

This doesn’t look good. Prayers for people around Joshimath, Uttarakhand. A big flood in Dhauli Ganga near Reni village, 26 KM from Joshimath. Many homes destroyed after cloudburst and breaching of reservoir. ITBP rushed in for rescue
Video: @ITBP_official pic.twitter.com/E5j1PTDZo7

The Chamoli district magistrate has instructed officials to evacuate people living in villages on the bank of the Dhauliganga River, ANI reported.

"People are being evacuated from the areas near Alkananda River. As a precautionary measure, the flow of Bhagirathi River has been stopped. To prevent the flow of water of Alaknanda, Srinagar dam & Rishikesh dam have been emptied", Rawat said.