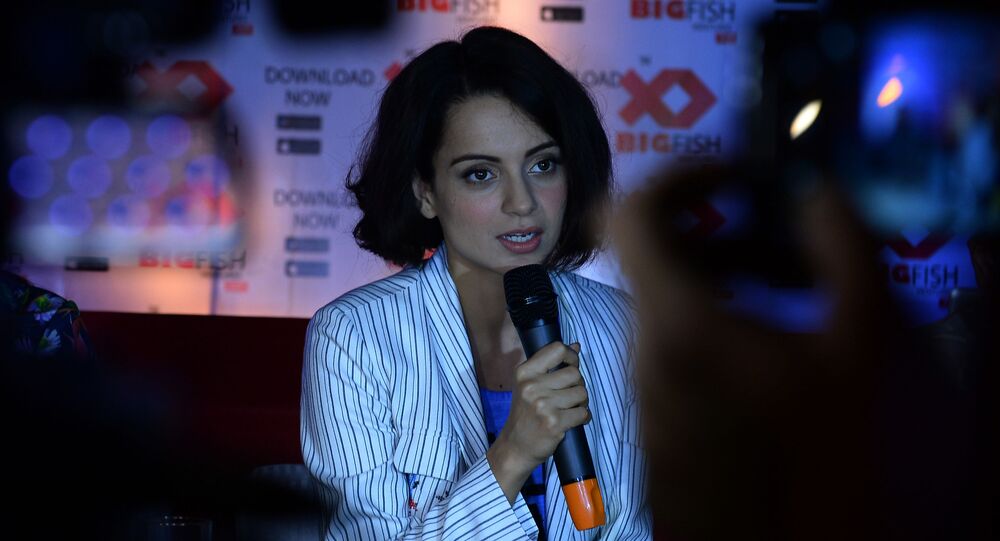 Earlier this week, celebrities such as Rihanna, Greta Thunberg, and Mia Khalifa tweeted in support of farmers protesting on the outskirts of India’s capital against new farm laws passed in September 2020. India's Ministry of External Affairs has warned foreigners against interfering in the country's internal affairs.

The actress alleged that the likes of Greta Thunberg and Rihanna, who recently tweeted in support of the protest, are a part of a global "conspiracy to brutally divide India into pieces."

“This big revelation that has come our way, defaming the nation would be a very polite way to describe this. This is a brutal attempt to break up India,” Kangana said.

Teen environmental activist Thunberg sparked widespread outrage by tweeting – and then deleting – a "toolkit" offering campaigning advice to the protesting farmers. The now deleted document also contained details on ways to support the protest movement, including demonstrations outside Indian diplomatic missions around the world.

Talking about Greta’s toolkit, Ranaut said: “It's God's blessing that Greta Thunberg, by accident owing to her condition or something, committed this mistake. This is such a big conspiracy. From the day this protest started, I have been saying this isn't an agitation by farmers, it's a conspiracy.”

Ranaut also claimed that "code words" were used in the toolkit, referring to "Yoga" and "Chai."

"They write here (in the toolkit document) that we have to completely [eliminate] Yoga and Chai from India. These seem like code-words to me. For the Prime Minister or other people. Otherwise, what do the (Farm) Laws have to do with Yoga and Chai?" she said.

Every day of the protest is planned in detail .... millions of dollars are being spent on this major plan to cut India in to pieces so that neighbouring nations can take advantage now watch carefully who all are a part of this major conspiracy in India #GretaThunbergexposed https://t.co/Cz3ZwkEvRV

The Bollywood star added, “These types of plannings that are being done against Modi ji, that end yoga, and tea, he is the one who propagates yoga. Clearly, they are planning the assassinations of leaders here, because such an environment has been created that if police officials fire even one bullet in self-defence, there will be severe repercussions and those terrorists will be protected internationally. Right now we can see how sensitive the position of our country is and how important these leaders are for us."

Ranaut also argued that a large number of the protesting farmers are Khalistani supporters, a Sikh separatist movement demanding that a separate country called Khalistan breaks away from the state of Punjab, which borders Pakistan in northern India.

In the interview, the actress claimed that a Canada-based international pro-Khalistani organisation called Poetic Justice Foundation (PJF) has been funding the protest. The PJF appears to validate these claims on its website, writing that aims to "challenge structures of oppression and discrimination through intersectional grassroots advocacy" and has been "actively involved in farmers' protest."

“Poetic Justice is a foundation that has started this movement, [it] is giving funds to people internationally from London and other places. They are urging people to gather at their respective places. This is a terroristic movement that has begun since September.”

"[Its] founder is based in Canada but in India, [its] head called Dhaliwal has written this – 'I am a Khalistani, you may not know about me because Khalistan is an idea, it is a living breathing movement. A movement towards independent Punjab.' This man is heading the movement,” Kangana said.

In a recent viral video on Twitter, PJF's Founder Mo Dhaliwal can be seen telling a group of protesters in Canada that "repealing of the farm laws was the beginning of the battle."

M Dhaliwal standing in the entrance of visa Consulate office in Vancouver on 26 JANUARY his uncle a Khalistani was killed by Punjab police after 1984 Riots pic.twitter.com/6RNXNrZC8N

"These people are highlighting only one percent of the farmers, who are mostly Khalistanis and have spread such a perception around the world that now international pressure has started mounting over India," Ranaut claimed.

After slamming the PJF, she then turned her attention to Rihanna, alleging that the singer was being paid for tweeting in support of the farmers.

“Rihanna, who is an American pop star, was silent when such a big attack was carried out on their own government (Capitol Hill). She must have charged $1 billion or so for tweeting on farmer protest. Where is all this money coming from?" Kangana asked.

No one is talking about it because they are not farmers they are terrorists who are trying to divide India, so that China can take over our vulnerable broken nation and make it a Chinese colony much like USA...
Sit down you fool, we are not selling our nation like you dummies. https://t.co/OIAD5Pa61a

​On Sunday the PJF issued a statement denying the allegations and clarified that it didn't "coordinate Rihanna, Greta Thunberg or any number of specific celebrities to tweet about the farmers' protest."

"We didn’t pay anyone to tweet — and certainly didn’t pay anyone $2.5m to do so. However, we did generally encourage the entire world to share this (farmers') issue. Through the international collective of organisers we encouraged the world to pay attention and amplify this message," thde PJF said.

9 months and $2.5 million later, we’ve got some explaining to do.
Then, let’s get back to the real work — #FreeNodeepKaur #FarmersProtest #AskIndiaWhy pic.twitter.com/mHBXL5MUvp

Ranaut's outburst against the farmers has impacted her work, with several brands she represented as an ambassador terminating their contracts with her. She's reportedly lost "about $1.5 million" as a result. She also says she's received hate mail.

Thousands of farmers have been demonstrating on the outskirts of Delhi's since 26 November 2020 and have blocked roads in the Indian states of Uttar Pradesh and Haryana. They're demanding that three controversial farm laws be repealed that were passed by Modi's government in September 2020.

The trio of laws include the Farmers' Produce Trade and Commerce (Promotion and Facilitation) Act 2020, Farmers (Empowerment and Protection) Agreement on Price Assurance and Farm Services Act 2020, and Essential Commodities (Amendment) Act 2020.

After several international celebrities tweeted in support of the protests last week, the Indian Foreign Ministry urged foreigners not to meddle in the country's domestic affairs.

"The temptation of sensationalist social media hashtags and comments, especially when resorted to by celebrities and others, is neither accurate nor responsible. Before rushing to comment on such matters, we would urge that the facts be ascertained and a proper understanding of the issues at hand be undertaken."