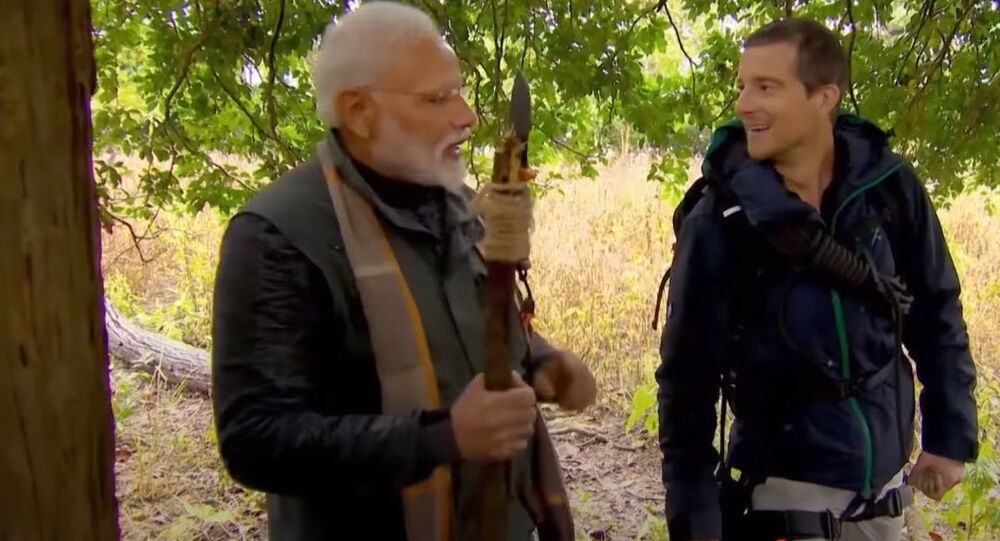 A tweet by British television adventurer Bear Grylls about one of his "favourite photos", taken with Indian Prime Minister Narendra Modi, has gone viral, garnering over 13,000 re-tweets within hours of being posted.

One of my favourite photos: soaking wet and sharing a cup of tea with Prime Minister Modi after our @Discovery jungle adventure together. This moment reminds me of how the wild is the ultimate leveller. We are all the same behind the titles and masks. #adventureunitesus pic.twitter.com/9EQPAeUOLO

The picture was taken during the shoot of his popular programme "Man vs Wild" on the Discovery Channel in 2019. The episode featuring Modi had seen the highest ever tune-ins, with over 6 million.

Shooting for the programme, however, came at a tense moment because of a deadly attack on an Indian paramilitary convoy in Jammu and Kashmir's Pulwama district at the same time. It is one of the deadliest terror attacks in the nation's history. Some 40 Central Reserve Police Force (CRPF) personnel were killed when a convoy of vehicles carrying Indian security personnel on the Jammu–Srinagar national highway was attacked by a vehicle-borne suicide bomber.

The attack brought India and Pakistan to the brink of a war in February 2019.

The tweet has brought back memories of the Pulwama attack and has stoked strong reactions from people on Twitter.

This was the most shameful event ever, when our 40 security personnel were killed cameras were still rolling till evening which is evident from the sunlight in the video .

Thank you reminding us what our PM was doing while our soldiers faced the deadiest attack on them, and making sure he completed the shooting even after getting the news pic.twitter.com/vpoPS37wxD

I used to like bear grylls coz of Man vs Wild but you are no longer a good person. Farmers are facing brutality, protesting for their rights and this man not ready to drop his ego. Shame on Mr.Modi and bear grylls. Unfollowing @BearGrylls 👎🏼

Leaders of the Indian National Congress, opposition in the parliament, had alleged that Modi did not halt the shoot despite receiving information about the attack, which occurred at 3:10 p.m. (local time), and continued to shoot for the Discovery episode until 7:00 p.m.

At a press conference on 21 February 2019 Congress party spokesperson Randeep Singh Surjewala said, "When the nation was in shock after the Pulwama terror attack, PM Narendra Modi was shooting a documentary on a boat ride till evening. After the shoot, he stopped for refreshments in the circuit house when the nation was mourning the death of its soldiers. It is terrible that our jawans were martyred and PM Modi was busy in his publicity, photoshoot,and tea snacks".

Bear Grylls' tweet also received appreciation from several netizens rallying for the government and its policies which are under attack due to the ongoing protests by farmers. Thousands of farmers have been camping on New Delhi's borders for the past 72 days demanding that a series of agricultural laws passed by the Modi government be repealed.

The international community, including the United Nations and celebrities like Rihanna, have commented on the ongoing protests in India.

This tweet was much needed at this time when celebrities with toolkits have suddenly popped up bearing vested interests & are maligning our PM. Thanks 🙏

This tweet was so much needed, with all these celebrities giving gyaan on mental health but still mad mouthing prime minister day and night no one can even imagine the pressure pm is going through, this tweet was soooo much needed. U ignore what good the man has done for us..