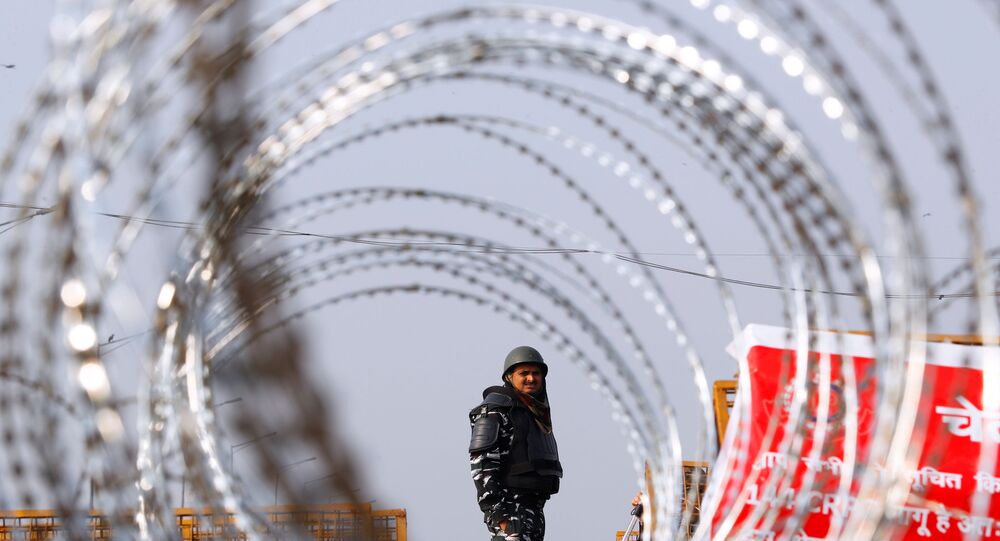 On Wednesday, the proceedings of the Indian parliament's lower house were stopped as some MPs from opposition parties - Congress, Aam Aadmi Party, DMK, and Shiromani Akali Dal - repeatedly shouted slogans against the farm laws enacted by parliament in September 2020.

On Thursday, opposition parliamentarians from 10 political parties were allegedly stopped by police from meeting the protesting farmers camping on the Ghazipur border on the outskirts of Delhi.

Speaking to the media, Shiromani Akali Dal lawmaker Harsimrat Kaur Badal said the lawmakers were not allowed to cross the barricades and reach the protest site.

"We visited the protest site as we wanted to get a firsthand account of the condition of the farmers. We are here so that we can discuss this issue (farmers' protest) in parliament. Now, all the parties will give details of what is happening here", she said while speaking to the media.

Another parliamentarian Supriya Sule slammed the central government over the heavy barricading put in place at the Ghazipur border.

"I condemn the government's actions, the situation seems to be even worse than in jails and we [opposition parliamentarians] all together will raise this issue in the parliament", she said.

A delegation of Opposition leaders are heading towards Ghazipur border to meet farmers. Delegation reached to meet the protesting farmers have been stopped by Police. #FarmersProtest #FarmBills2020 #Gazipur @OfficialBKU pic.twitter.com/uZ3YdDRVe9

​At Ghazipur on the Delhi-Uttar Pradesh border, the authorities have put in place multi-layer barricades to stop the movement of vehicles. Barbed wire has also been put up to keep people from arriving on foot.

On Thursday morning, pictures and videos of the nails that were initially put up to prevent tractors or other vehicles from reaching the protest sites being removed went viral. However, Delhi Police said the nails are being repositioned.

​The group of parliamentarians, meanwhile, returned after not being able to meet the protesters.

Over the last two months thousands of farmers, mainly from the states of Punjab and Haryana, have been protesting against three farm laws passed by the Prime Minister Narendra Modi-led government. The farmers want the laws to be revoked.

The farmers are protesting against the Farmers (Empowerment and Protection) Agreement of Price Assurance and Farm Services Act, 2020, Farmers Produce Trade and Commerce (Promotion and Facilitation) Act, 2020, and The Essential Commodities (Amendment) Act 2020.

Farmers believe that the new laws will pave the way for the dismantling of the minimum support price system (MSP), leaving them at the mercy of big corporations.