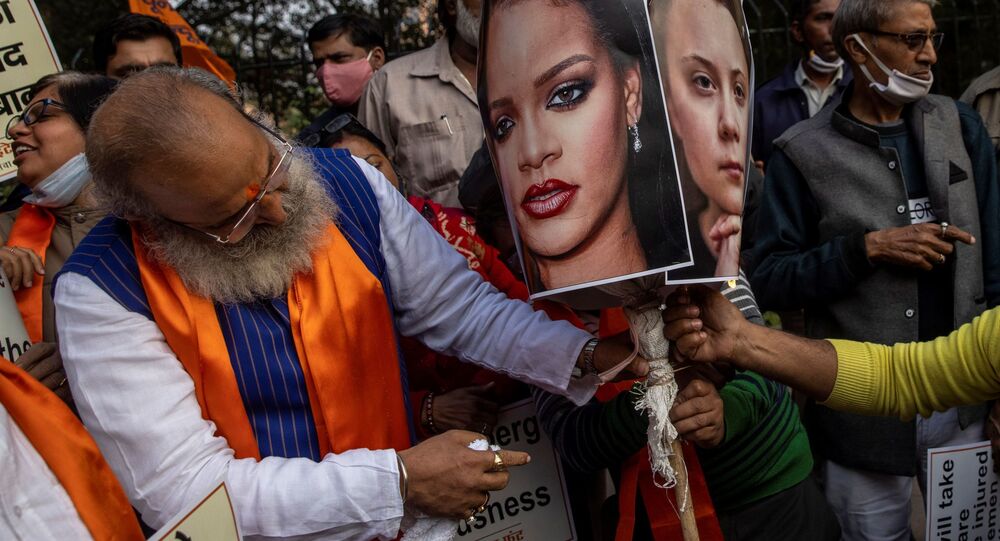 On Tuesday, singer Rihanna tweeted in support of farmers protesting in India for more than two months against three new farm laws passed by the Modi government in September 2020. Attracting global attention, many American celebs, including Mia Khalifa and Kamala Harris' niece, have expressed solidarity with the protesting Indian farmers.

With #IndiaAgainstPropaganda and #IndiaTogether, Bollywood superstars Akshay Kumar, Karan Johar, Ajay Devgn, and many others have triggered a movement on social media, urging people to stand united and not fall for any false propaganda against India or Indian policies.

The movement began after India’s Ministry of External Affairs (MEA) released a statement reacting to comments by Rihanna, Mia Khalifa, Greta Thunberg, Amanda Cerny, along with others and urged people that before making any assumptions or jumping to any conclusions, they must understand what the issue really is.

Superstar Akshay Kumar took the movement up a notch higher by tweeting, “…the efforts being undertaken to resolve their issues are evident. Let’s support an amicable resolution, rather than paying attention to anyone creating differences”.

Farmers constitute an extremely important part of our country. And the efforts being undertaken to resolve their issues are evident. Let’s support an amicable resolution, rather than paying attention to anyone creating differences. 🙏🏻#IndiaTogether #IndiaAgainstPropaganda https://t.co/LgAn6tIwWp

​Actor Ajay Devgn joined the bandwagon and said, “Don’t fall for any false propaganda against India or Indian policies. It’s important to stand united at this hour...”

Don’t fall for any false propaganda against India or Indian policies. Its important to stand united at this hour w/o any infighting 🙏🏼#IndiaTogether #IndiaAgainstPropaganda

​Sharing the MEA statement on Twitter, actor Suniel Shetty tweeted, “We must always take a comprehensive view of things, as there is nothing more dangerous than a half-truth”.

We must always take a comprehensive view of things, as there is nothing more dangerous than half truth. #IndiaTogether #IndiaAgainstPropaganda @hiteshjain33 https://t.co/7rNZ683ZAU

​Calling farmers “the backbone of India”, Bollywood filmmaker Karan Johar said, “…Let us together, make every effort we can to find solutions that work for everyone…Let us not let anyone divide us”.

We live in turbulent times and the need of the hour is prudence and patience at every turn. Let us together, make every effort we can to find solutions that work for everyone—our farmers are the backbone of India. Let us not let anyone divide us. #IndiaTogether

From "New Amsterdam" series actor Anupam Kher to filmmakers Ekta Kapoor and Nila Madhab Panda to singer Kailash Kher and others, many have joined forces to advocate for peace and to remain united.

Lets stand united against any propaganda. Together we can and we will! #IndiaAgainstPropoganda #IndiaTogether https://t.co/4PhlCCowz4

बढ़ते वर्चस्व को देख भारत विरोधी किसी भी हद तक गिर रहे. Even in this sad phase of pandemic,India is helping all nations with vaccine supply for the sake of Humanity.Let all realise that India is ONE & will not tolerate comments against it. #IndiaTogether #IndiaAgainstPropaganda

Talks are the only way forward, let's work towards a solution, a nation divided will never lead to a resolution, farmers are important, the country is important and together we can tide over any crisis 🙏 #IndiaTogether https://t.co/DueBtF8D9G

​While many Bollywood celebrities are now coming out against American celebs such as Rihanna, whose tweet - allegedly based on “half-truth” - sparked social media outrage, some have been appreciating her and others for voicing their concern and drawing international attention to the farmer issue.

Within hours of Rihanna’s tweet on India's protesting farmers, singer-actor Diljit Dosanjh, as a gesture of appreciation, released a song dedicated to her titled "Riri (Rihanna)".

Taking a jibe at Diljit, actress Kangana Ranaut, who has been critical of the farmers and called them terrorists, tweeted in Hindi, “He also needs to earn a rupee or two. Since when have you been planning this? It takes at least a month to release a song, and libru (a short derogatory term for liberal) want us to believe it's all organic. Ha ha".

Rihanna's tweet has brought a sea of reactions from many international celebrities, bringing global attention to the ongoing farmer protests in India.

​The public opinion on these protests is divided, with some supporting the farmers and others siding with the Modi government.