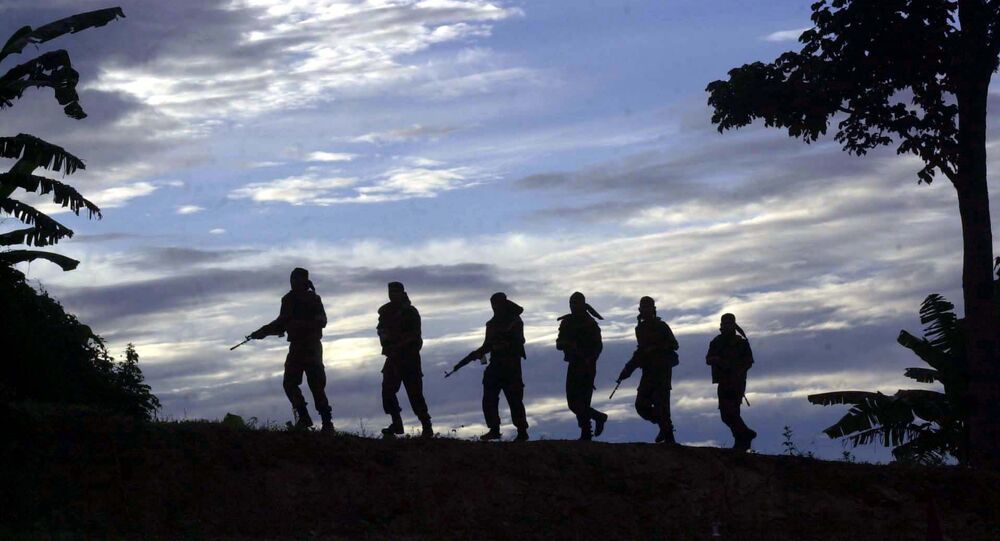 Despite some "positive" developments during military commander level talks between India and China, the two sides failed to diffuse tensions along the Line of Actual Control (LAC). Since President Ram Nath Kovind confirmed the Indian Army's deployment, a video has surfaced allegedly showing the PLA building up military assets close to the LAC.

Calling it "unfortunate attempts", Indian Defence Minister Rajnath Singh has accused China of employing force to change the status quo along the nations' unresolved borders. The minister, however, emphasised that the government will defend the country's border at any cost.

"India is vigilant and prepared to counter and defeat any misadventure to defend our people and territorial integrity at all costs", Rajnath Singh said while inaugurating the AeroIndia 2021 exhibition in Bengaluru.

© AFP 2021 / Agnes BUN
Satellite Images Allegedly Show China Building a New Outpost, Roads at Sikkim Border With India
The statement comes against the backdrop of a report showing a huge number of Chinese troops, armoured tanks, and military trucks lined up near the Line of Actual Control, a loosely demarcated de-facto border that separates the two Asian giants.

The Indian TV channel Times Now reported that China's military has deployed around 350 tanks including sophisticated "Type 99" vehicles near the border.

Last week, Indian President Ram Nath Kovind had also confirmed that the country has strengthened its military forces along the disputed Himalayan border amid talks with China to diffuse the tensions.

"My government is vigilant and fully committed to safeguarding the interests of the country. Additional forces have also been deployed at the LAC to protect the sovereignty of India", Ram Nath Kovind said while addressing members of parliament.

© AP Photo
India-China Ties at a Crossroads, Their Choices Will Have Global Repercussions, FM Jaishankar Says
The Indian Army has deployed domestically-produced attack helicopters, Rafale fighter jets, tanks, and other military assets in the contested Ladakh region, where a border standoff erupted last April during a patrol in no man's land near the lake Pangong Tso. The two sides accused each other of violating border agreements.

The two countries earlier termed the ninth round of military commander level talks as "positive, constructive, and practical, which will contribute to strengthening mutual trust and mutual understanding".