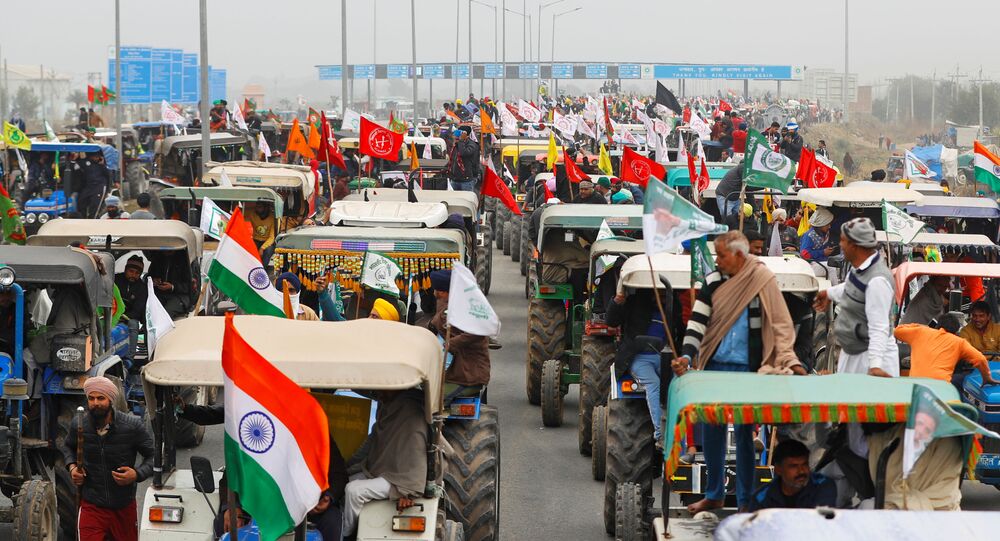 Protesting farmers, mainly from the states of Punjab, Haryana, and Uttar Pradesh have been demanding three controversial farm laws be repealed since November.

On Saturday, India's Ministry of Home Affairs suspended mobile internet and messaging services in certain districts of New Delhi in a bid to defuse the ongoing farmers' rallies at three protests sites: Singhu, Ghazipur, and Tikri.

The farmers are observing a day-long fast to mark the anniversary of Mahatma Gandhi's death, who staged non-violent protests against British rule.

The situation has been tense since Republic Day on 26 January, when clashes erupted between protesting farmers and police in the Indian capital, with many demonstrators breaching the city's iconic Red Fort. Over 300 policemen were injured in the incident after protesters entered Delhi as part of a tractor rally.

In a statement the Home Ministry said the temporary suspension of mobile services is “necessary and expedient."

The Indian state of Haryana froze internet and messaging services on Friday in 14 districts until 5 pm on 30 January as authorities try to contain "public order."

On Friday, thousands of farmers gathered in the city of Muzaffarnagar in Uttar Pradesh state in a massive show of support for the protests led by the Bharatiya Kisan Union, a key farmers’ body.

Senior Haryana government official Rajeev Arora warned of "rampant misinformation" on social media about the farmers’ protest across the state.

“There is a likelihood of disturbance of law and order, public peace and tranquility in some districts of the state by protesters, agitators, miscreants and anti-social elements,” he said.

The government order further mentioned: “There is a clear potential of public utilities, damage to public assets and amenities and disruption of public law and order in some districts on account of misuse of internet services by way of spread of inflammatory material and false rumours.”