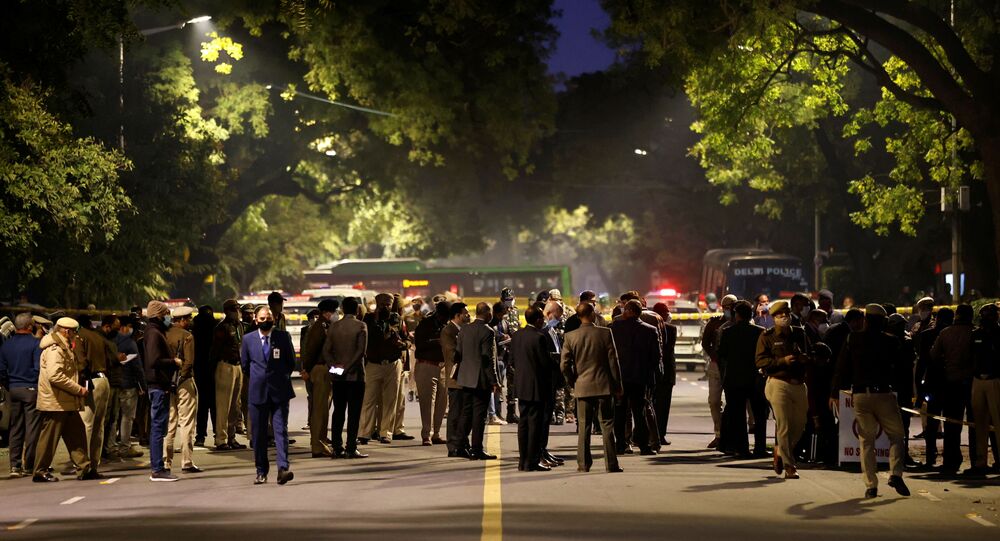 On Friday evening, a low-intensity blast took place a few metres away from the Israeli embassy in the Indian capital. According to Delhi Police, nobody was injured in the incident but the windscreens of several vehicles parked nearby were damaged. The blast occurred on the final day of India's 72nd Republic Day celebrations.

The terrorist group Jaish-ul-Hind has allegedly claimed responsibility for the blast near the Israeli embassy in India’s capital city New Delhi. Not much is known about this group.

A senior official from an Indian federal investigation agency revealed to Sputnik on condition of anonymity that they have found the Telegram chat of a suspected channel in which Jaish-ul-Hind took responsibility for the minor IED explosion.

"In the said chat, the terror outfit is seen taking pride over the attack. However, agencies are still verifying the claim," the official said.

An unknown entity calling itself "jaish ul hind" has taken responsibility of today's blast outside Israel embassy. It has released the first such pic late last night on social media. pic.twitter.com/P30qs0sY3p

Shortly after the blast occurred, Deputy Chief of Mission of the Israel Embassy, Rony Yedidia, told Sputnik on Friday that everyone was fine and safe.

The explosion took place when the annual national "Beating the Retreat" ceremony was being held neaby, with President Ram Nath Kovind, Prime Minister Narendra Modi, and other top officials and diplomats present.

Meanwhile, an alert has been issued at all airports, important installations, and government buildings in view of the Friday blast in New Delhi. Security measures have also been beefed up, the Central Industrial Security Force (CISF) said in a statement.

The CISF is responsible for guarding civil airports, vital nuclear and aerospace installations, the Delhi Metro and central government buildings.

Both the Indian and Israeli security services told Sputnik that they consider the explosion to be an attempted terror attack.

© REUTERS / DANISH SIDDIQUI
Police Hunting for Details About Iranians Arriving in New Delhi Day After Blast Near Israel Embassy
Earlier in the day, the city police asked the Foreigners Regional Registration Office (FRRO) to provide details regarding all Iranians who arrived in Delhi in January.

It came after Israeli defence circles raised suspicions about the potential involvement of Iran’s Islamic Revolutionary Guard Corps (IRGC), as Tel Aviv had previously boosted security at its missions around the world in the aftermath of the killing of a top Iranian nuclear scientist, Mohsen Fakhrizadeh. Tehran has accused Tel Aviv of being behind the targeted assassination of Fakhrizadeh back in November 2020; Israel, however, has neither confirmed, nor denied its involvement in the killing.