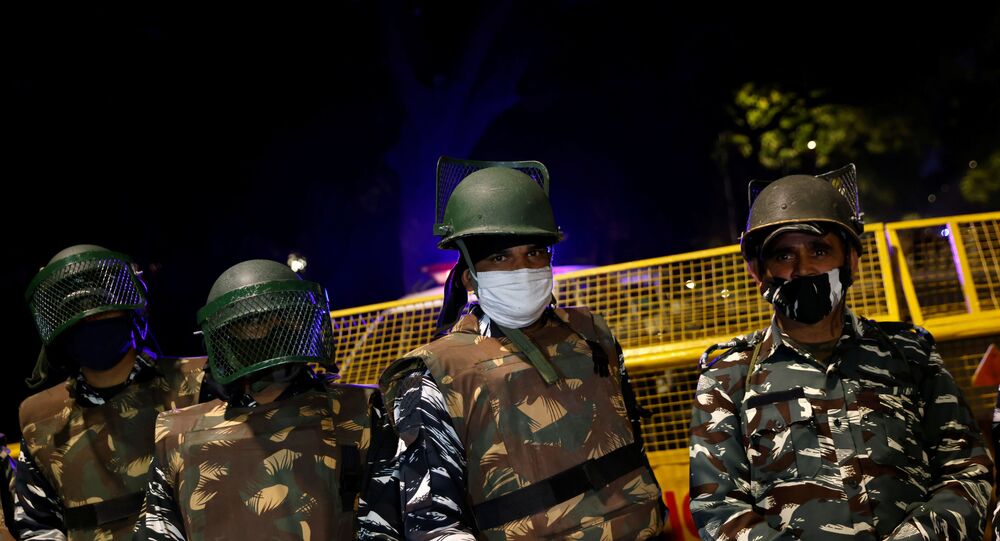 On Friday evening, a low-intensity blast took place just several metres away from the Israeli embassy on the pavement in New Delhi. According to the Delhi Police, nobody was injured in the incident but windscreens of at least three cars were damaged.

The Delhi Police on Saturday asked the Foreigners Regional Registration Office (FRRO) to provide details of all Iranians who have arrived in New Delhi in this month following an explosion near the Israeli embassy in the Indian capital on Friday.

The request comes a day after Israel’s defence establishments suspected Iran’s elite Islamic Revolutionary Guard Corps (IRGC) of being behind the attack.

Prior to the incident, which is being treated by Indian and Israeli officials as a 'terrorist' incident, a Tel Aviv directive was issued for increased vigilance at its missions around the world due to fears of a potential Iranian attack following the November assassination of top Iranian nuclear scientist Mohsen Fakhrizadeh, whose killing Tehran has blamed on Israel. Tel Aviv hasn't commented on the accusations.

THe Israeli security establishment is expected to send a team to Delhi to participate in the investigation into the blast currently being carried out by Indian agencies.

© Sputnik
Security Boosted Across New Delhi After Explosion Near Israeli Embassy Treated as Terrorist Incident
Meanwhile, the Delhi Police have obtained CCTV footage showing a cab dropping off two persons who walk towards the blast site near the Israeli Embassy, where the explosion occurred on Friday evening.

The blast took place on the day when New Delhi was organising a 'Beating Retreat' ceremony to conclude the four-day Republic Day celebrations. A high alert was declared in the city.

A senior Delhi Police official told Sputnik that the driver of the cab has been contacted, and sketches of the two suspects are being prepared.

Sources in New Delhi claimed on Friday that an envelope was found near the blast site in which the attackers were thought to have left a message for the embassy.

Investigators, who wished not to be named, said explosive residue recovered from the spot is suspected to be ammonium nitrate.

“A detailed forensic report will confirm what type of IED was used. Splinters and some cans were also found near the cars that were damaged in the blast,” officials in New Delhi told Sputnik on Friday.

Speaking to the media, Ron Malka, the Israeli Ambassador of India, stated that both the countries are in touch, despite contentions, and the media agencies are also coordinating with each other.

"We have full trust in the Indian authorities, that it will take any measures that are needed to protect the Israeli representatives that are in India, and second, to conclude this investigation & finding those that are responsible for that," Malka stated.

© REUTERS / DANISH SIDDIQUI
Blast at Israel’s Embassy in New Delhi Not the First Time Israeli Nationals Targeted in India
Indian Prime Minister Narendra Modi has been briefed about the investigations in the aftermath of the blast.

Investigative agencies are also trying to find out if the blast has any connections with the explosion which occurred in 2012 in which the wife of an Israeli diplomat was targeted on Delhi’s Aurangzeb Road by a man on a motorbike. The bomber had taken a flight out of the country the same night. At the time, Israel accused Iran of being behind the attack, while a probe by Indian agencies also claimed to have found IRGC involvement. A Delhi-based journalist was arrested on charges of being a part of the conspiracy.