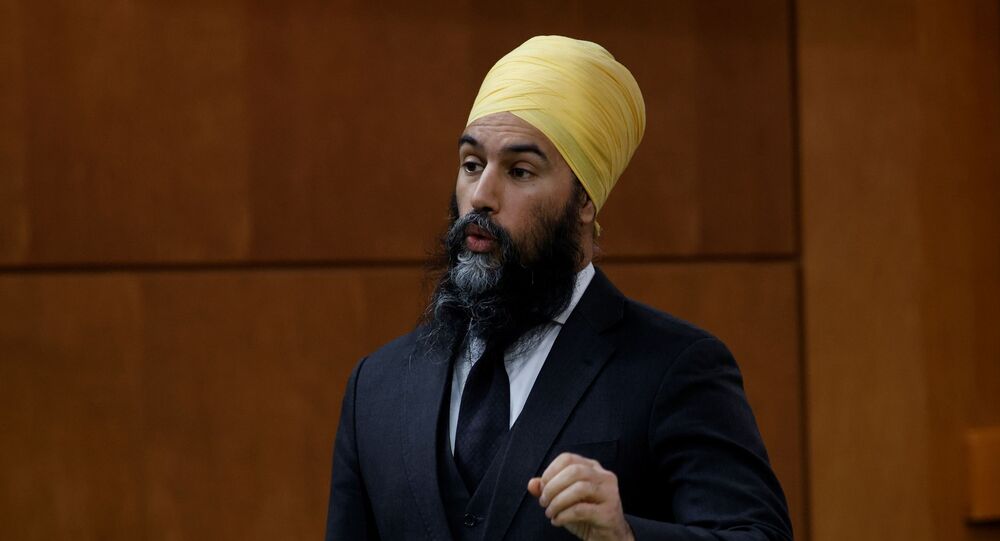 Thousands of farmers, mainly from Punjab and Haryana states, have been protesting at Delhi's borders - Singhu, Tikri and Ghazipur since 26 November for revocation of new farms laws, passed in Indian parliament last September. The government has alleged Khalistan supporters have joined the protests.

Canadian parliamentarian Jagmeet Singh, who is described by many in India as a supporter of the 'Khalistan' Sikh separatist movement, has expressed his concerns regarding violence against protesting Indian farmers and called upon Canadian Prime Minister Justin Trudeau to condemn it immediately.

In a video message on Twitter, Singh, who is also the head of Canada’s New Democratic Party (NDP), has said, "I call on leaders across the world to denounce Indian government's violent response to these peaceful protesters and I stand in solidarity with the farmers demanding justice and fairness."

I am deeply concerned about the violence against farmers in India

I am calling on Justin Trudeau to condemn the violence, immediately

On the occasion of India’s 72nd Republic Day on 26 January, a large number of protesting farmers clashed with Delhi Police at the country’s iconic Red Fort, leaving over 300 policemen injured. The protesters had entered Delhi as part of a tractor tally.

​Trudeau had already expressed concern over the ongoing farmers' protests as early as last November.

Addressing members of the Sikh community through a video conference on the birthday of Sikhism's founder Guru Nanak on 30 November, Trudeau said that the farmers' protests in India were "concerning".

Sikhs comprise nearly 1.4 percent of the Canadian population, numbering about half a million, according to the World Sikh Organisation of Canada. The first Sikhs arrived in Canada in 1897, and by 1907 there were close to 5,000 Sikhs in the country; the first Sikh house of worship was established in Vancouver in 1908.

India’s capital New Delhi has emerged as the epicentre of the ongoing agricultural protests against the new reform laws passed by the Narendra Modi-led federal government in parliament last September.

The Indian government has maintained that the ongoing agitations on Delhi's borders have been infiltrated by "Khalistanis".

During a hearing on the ongoing protests, the government told the apex court that “Those who organised rallies for Khalistan have put up flags at the protests".

The Khalistan movement refers to the demand for a separate country for Sikhs carved out of the northern Indian state of Punjab, located on the India-Pakistan border.

The movement witnessed a rise in the 1980s and almost fizzled out in 1990s after stringent action was taken by the Indian government.

Why Are Farmers Protesting in India?

The farmers are protesting against the Farmers (Empowerment and Protection) Agreement of Price Assurance and Farm Services Act, 2020, Farmers Produce Trade and Commerce (Promotion and Facilitation) Act, 2020, and the Essential Commodities (Amendment) Act 2020.

According to the government, the laws are aimed at agricultural market liberalisation; they allow farmers to sell their produce at places apart from their designated agriculture market. They also aim to allow contract farming, under which farmers can enter into supply agreements with private firms for pre-decided prices.

Farmers, however, fear the new laws will pave the way for the dismantling of the minimum support price system (MSP) and will affect the state procurement system of their harvest, leaving them at the mercy of big corporations.

Has the Khalistan Movement Lost Its Steam in India’s Punjab?