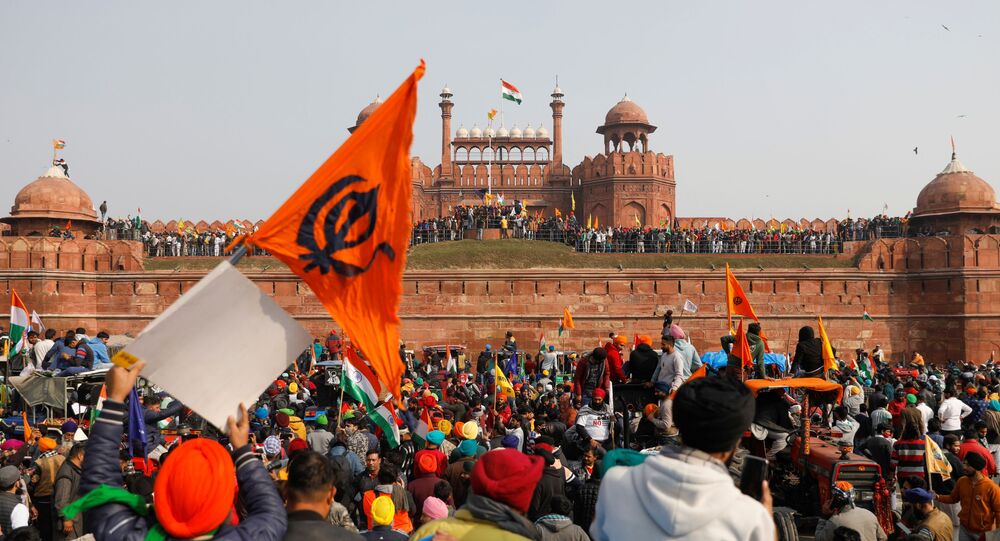 Has the Khalistan Movement Lost Its Steam in India’s Punjab?

The Khalistan movement refers to the demand for a separate country for Sikhs carved out of the northern Indian state of Punjab, located on the India-Pakistan border. The movement saw a rise in the 1980s and almost fizzled out in 1990s after stringent action was taken by the Indian government.

As thousands of farmers from the Indian states of Punjab and Haryana have been camping at Delhi's borders for over two months, many reports have cautioned that some people favouring "Khalistan", a separate homeland for Sikhs, may be succeeding in promoting their agenda.

"Khalistani" propaganda during the farmers’ protests has left many people in Punjab furious, as the separatist concept is believed to have no resonance in the state anymore, where Khalistan was once demanded to be established.

India’s Taran Taran district, located close to the Pakistani border in Punjab state, was the hub of the Khalistan movement 25 years ago.

According to Baldev Singh Dhillon, an agriculturist in Taran Taran district, the common man in Punjab, where a majority of the country’s Sikhs live, has no aspirations for a separate country.

“People here closed the Khalistan chapter soon after the violence perpetrated by Pakistan-backed groups ceased in the 1990s and peace prevailed. Today, the young generation does not even know properly what the Khalistani movement was, let alone being part of it”, he explains.

once again the interesting parallel of both paki and right wing handles wanting to make the stupidity of khalistan seem a reality when it has no echo among the sikhs. they feed off each other, secure in the knowledge they don't suffer the consequences.

The ongoing protests by farmers on Delhi's borders have found a connection with Khalistani supporters after the central government told the Supreme Court that Khalistanis had infiltrated the farmers’ protests.

On 26 January, a section of protesting farmers stormed the iconic Red Fort in Delhi and hoisted a flag of the Sikh faith where the national flag is traditionally raised by the prime minister on Independence Day, 15 August. Although the "Nishaan Sahib" flag is a symbol of the Sikh faith, many people on social media started describing it as a "Khalistani" flag. Others found it offensive, as it was hoisted on the main pole meant only for the national flag – the Tricolour.

© REUTERS / ADNAN ABIDI
A man holds a flag as he stands on the top of the historic Red Fort during a protest against farm laws introduced by the government, in Delhi

Following the violence at the Red Fort, Twitter suspended more than 500 accounts believed to be of Khalistanis for allegedly inciting violence and spreading misinformation about the farmer protests and farm laws.

According to ANI, Delhi Police are working to identify Twitter accounts of Khalistanis.

Jagtar Singh, a noted journalist and author, also says that currently, the Khalistani movement is not being discussed in Punjab state.

“People here have moved on. Punjabis are known for forgetting the bitter past and moving on for a fresh start in life. This Khalistani narrative in farmers' protests has been brought in by the ruling BJP to deflect attention. The farmers’ protests are a huge embarrassment for the ruling Modi government – it is the first time that the government has met with such stiff opposition to its policies by the common man”, Singh adds.

Punjab state chief Captain Amarinder Singh has been highlighting how Khalistani propaganda is breeding on foreign soil, especially in countries like Canada, where there is a large Sikh population, accounting for roughly 1.5 percent of the Canadian population. The Punjab chief also refused to meet the Sikh Canadian Defence Minister Harjit Singh Sajjan in 2017 when the latter visited the state, having branded him a "Khalistani sympathiser".

Ravinder Singh Robin, a prominent journalist who has covered the situation in Punjab for nearly three decades, shared that there is hardly anyone in the state to carry forward the flag and cause of Khalistan.

“There are only a few splinter groups that pop up at the anniversary of 1984 Operation Blue Star”, Robin says in reference to an operation by Indian forces when they stormed the Golden Temple to flush out infiltrators holding up inside the complex.

“Apart from that there is no one rooting for Khalistan, neither do people in Punjab want such a thing”, Robin adds.