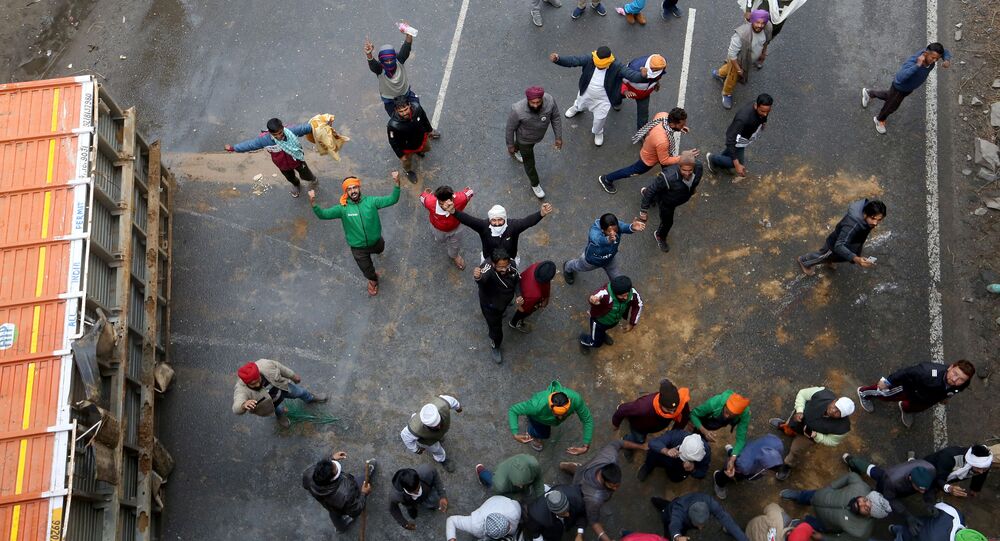 The farmers, mainly from the Punjab and Haryana states, have been protesting at Delhi's borders – Ghazipur, Singhu, and Tikri - since 26 November, demanding that the government revoke three new farm laws that were passed in the parliament in September 2020.

Thousands of farmers from the Indian states of Haryana and Uttar Pradesh have extended support to the farmer unions protesting at the Ghazipur border that connects the Delhi and Uttar Pradesh states, blocking the Chandigarh-Jind Highway in Haryana.

In Uttar Pradesh, farmers in the Muzaffarnagar area have blocked National Highway 58.

The Ghazipur incident - a forceful eviction of protesters by the government - has evoked a strong response from farmers in the neighbouring areas of Haryana and Uttar Pradesh, who are now reportedly embarked on another rally toward the national capital of Delhi in a show of solidarity with the Ghazipur protestors. Around 20,000-30,000 farmers from the Sisauli of Muzaffarnagar district in Uttar Pradesh are expected to join the Ghazipur protestors. Reports of farmers gathering to depart for Delhi show them pouring in from Bhiwani, Jind and some other districts of Haryana.

VIDEO | Footage from Jind, Haryana, where thousands of farmers have gathered on the streets to protest pic.twitter.com/i3SSj8vbwF

VIDEO | Heavy police presence at the Ghazipur border where the government has ordered protesters to vacate the area [2/2] pic.twitter.com/VTsfaHbSY3

At midnight, at the Ghazipur protest site, Farmer's Union leader Rakesh Tikait said that many were coming from other states. "We appeal for a peaceful protest. People have started to come from different places. We are making arrangements for water and other things. We will sit peacefully and continue," Tikait said.

Announcements are being made from temple in Haryana's Bhiwani to join protesters at #Singhu, #ghazipurborder pic.twitter.com/wfYi7CBWQt

These developments are occurring just hours after government authorities ordered the dispersal of people staging a sit-in at the Ghazipur border area who have been there for over two months protesting the federal government’s three new farm laws.

Despite police negotiating with farm leaders, a number of farmers have refused to vacate until they see the new laws repealed.

The Yogi Adityanath-led Uttar Pradesh government’s decree came two days after Delhi’s iconic Red Fort was the scene of violence, even as the farmers during the Tractor Rally on India’s 72nd Republic Day hoisted a religious flag on the main flagpole that is, in ordinary circumstances, meant only to fly the national flag.

Tension has prevailed since Thursday afternoon, as security was beefed up on the Ghazipur border, with a heavy deployment of security personnel, including local police and a militarized anti-riot Rapid Action Force (RAF).

The tens of thousands of farmers from the north Indian agricultural states are opposing three laws; the Farmers' Produce Trade and Commerce (Promotion and Facilitation) Act 2020, the Farmers (Empowerment and Protection) Agreement on Price Assurance and Farm Services Act 2020, and the Essential Commodities (Amendment) Act 2020.

One of the main concerns by farmers about these new laws is that they will end the state procurement system that sets designated agricultural market minimum selling prices, a basic government-assured price for the harvest.