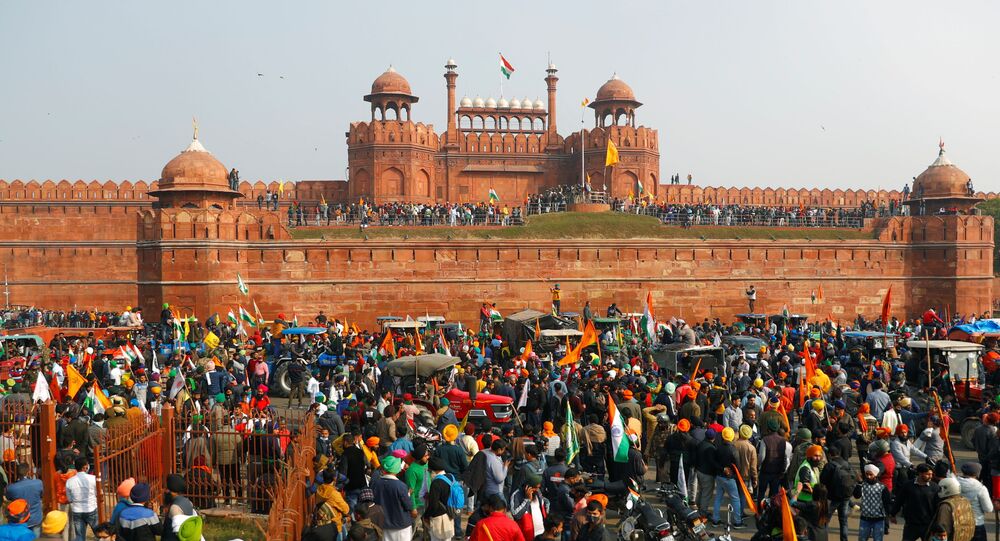 On Tuesday, the law and order situation in the Indian capital spiralled out of control as protesting farmers barged into Delhi, breaking police barricades at the border. The farmers’ leaders have vowed to continue their protests against three farm laws that aim to reform the agricultural sector.

It's been several days since the Indian capital witnessed a massive clash between police and protesting farmers, and the camps of the agitated agriculturalists protesting on the outskirts of Delhi look deserted. Since 26 November, thousands of farmers, stationed in semi-makeshift camps, have blocked the roads in Uttar Pradesh and Haryana which lead to Delhi.

A Sputnik team visited the protest sites on Wednesday and Thursday to find out that most of the protesters were disheartened after the Republic Day clash.

"We are disappointed with whatever happened on the Republic Day parade. These hooligans can not be one of us. We have been here for over two months now but not a single unlawful incident has been reported," says Harvinder Singh Rana, National Spokesperson of Veterans Association.

When Sputnik visited these camps earlier, people were in good spirits, cheerful and always outside of their tents.

"Most of the people are sad with the loss of one of our brothers [a farmer who lost his life on Republic Day during the tractor rally]. People who had stayed back for the tractor rally have gone back now. But we want to make it clear to the government that we may be down but will continue to protest in the most peaceful manner," Rana emphasises.

© REUTERS / ADNAN ABIDI
Violence, Death & Invasion of Delhi: Here's How the 72nd Republic Day Unfolded in India’s Capital
Another protester, Gaurav Sorahi, believes that the violence has given an excuse to the Narendra Modi government to use force against farmers to remove them from the protest sites.

"It is the government that planted these goons to intermingle in our rally and spoil the image of protesters. Not a single person from our side had been present at the Red Fort during the clash," Gaurav Sorahi, a protester at the Ghazipur-Delhi border, one of the protest sites, says.

Sorahi stresses that they will continue to listen to their union leaders when asked about their future action plan.

On Wednesday, the Samyukta Kisan Morcha, an umbrella organisation of farmers' unions, called off the march to Parliament House on 1 February, the day when the annual budget is scheduled to be presented. Nevertheless, leaders emphasised that agitation would continue and there would be public meetings and hunger strikes across the country on 30 January.

But slowly some of the organisations which had been supporting the months-long agitation withdrew from the protests at the Delhi borders in light of the violence.

While announcing the withdrawal of support for the agitation, Bharatiya Kisan Union (Bhanu) president Thakur Bhanu Pratap Singh said he was deeply pained by whatever happened during the tractor parade in the Indian capital.

V.M. Singh of the All India Kisan Sangharsh Coordination Committee said that it is withdrawing from the ongoing agitation as “they cannot carry forward a protest with someone whose direction is something else".

Road opened : Chilla Border - Delhi Noida link road all clear now. Bhartiya Kissan Union Bhanu, which was sitting for over one and a half months called off their protest from borders and removed their tents now. #farmersrprotest pic.twitter.com/Un6Y9LaoPj

​Meanwhile, the government has started deploying additional force at different locations to keep an eye on any untoward incidents.

Lookout Notices to the Farmers

A day after lodging 25 criminal reports against 30 of the 40 farm union leaders who were involved in talks with the Narendra Modi government, Delhi Police issued circulars and asked them to respond within three days. Police also asked them to surrender their passports. The notices were issued as the farmer leaders broke the conditions set for Tuesday's tractor parade, Delhi Police said.

According to the Delhi police, Tuesday's violence in the capital has left 394 law enforcement personnel injured; 30 police vehicles were damaged. Speaking to the media, Delhi police commissioner S. N. Srivastava warned that no culprit will be spared.

"The farmer unions did not follow conditions set for the tractor rally that was supposed to be held from 12 PM to 5 PM (local time) on Republic Day," Srivastava said, adding that some of the farmer leaders gave inflammatory speeches after which protesters broke through the police barricades.

"19 people have been arrested so far, while more than 50 people have been detained. We are using a facial recognition system and identifying the accused with the help of CCTV and video footage. Strict action will be taken against those identified," the police chief said.

© REUTERS / DANISH SIDDIQUI
Day After Violent Clashes: Daily Commuters Face Hardship as Roads Linked to Delhi Borders Shut
The offers were rejected by the farmers' unions, which said they will not settle with anything less than the repeal of the laws.

Meanwhile, 16 opposition parties have extended firm support to the agitating farmers and decided to boycott the president's address to a joint session of Parliament on 29 January, before the commencement of the Budget session. In a joint statement, leaders from the Congress, NCP, DMK, TMC, Shiv Sena, Samajwadi Party, RJD, CPI, CPI(M) and PDP and other parties said the three farm laws are "an assault on the rights of the States and violate the federal spirit of the Constitution".

"If not repealed, these laws will effectively dismantle the edifice of National Food Security that rests upon – minimum support price, government procurement and Public Distribution System (PDS)…Parliamentary scrutiny was bypassed and the laws were pushed through muzzling the Opposition, in brazen violation of Parliamentary rules, practices and conventions. The very constitutional validity of these laws remains in question," a joint statement issued by the opposition parties reads.