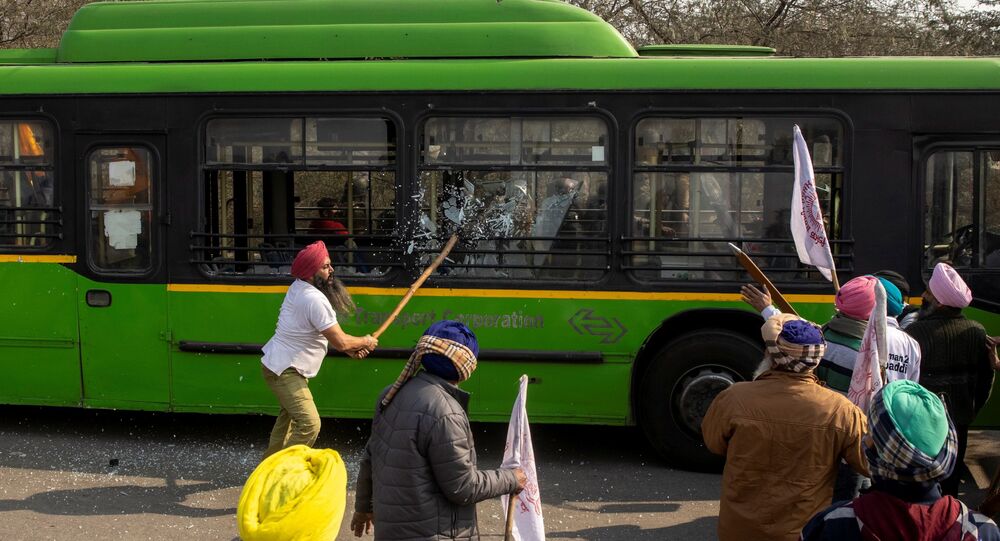 Thousands of protesting farmers entered Delhi on Tuesday morning as part of the Tractor Rally, in jeeps, cars, and tractors. A section of them soon invaded Delhi's iconic Red Fort, leading to violent clashes between the police and farmers. More than 300 police suffered injuries and one tractor-riding protester died.

A day after violent clashes broke out between the Delhi Police and farmers on Republic Day, the Delhi Traffic Police closed most of the routes leading from Delhi to Ghaziabad in the east on Wednesday. It was a precautionary measure because of the protesting farmers but led to heavy traffic jams near the border area.

Nitin Dimri is one of thousands who have to travel to nearby Ghaziabad city in Uttar Pradesh state from the national capital every day for his job. But on Wednesday it took him more than one hour to reach his office in the Vaishali area of Ghaziabad, barely 10 km from his home in Delhi because of road closures. Links between Delhi and the neighbouring cities of Noida, Gurugram, and Faridabad have also been closed.

"First, no internet connectivity on Tuesday, and now most of the routes towards Ghaziabad are closed. What are we supposed to do? We are the victims of the farmers-Delhi police clash of yesterday," Dimri, a marketing executive with a MNC, told Sputnik on Wednesday.

In the morning, all routes to his office were closed, except Anand Vihar, a known inter-state bus station which serves as a gateway between Delhi and Ghaziabad.

On Jan 26, the Delhi Police blocked roads they shouldn’t have

In Ghaziabad, near Country Inn, ahead of Vaishali, but off Anand Vihar road, police put barricades + state buses + rows of cops. This was in a residential area opening into Delhi.
Rickshaws + travellers were stuck

Delhi: Traffic congestion in parts of the national capital; visuals from near Anand Vihar. pic.twitter.com/DXyPZovoV0

​On Tuesday morning, the national capital border with Ghazipur village is one of the spots from where the first reports of clashes between police and farmers started on 26 January. Later, the farmers moved towards Delhi's ITO area, just above 1km from the Red Fort.

On Wednesday, the traffic police also closed the Ghazipur flower and fruit wholesale market and National Highways 9 and 24 that connect the national capital city of New Delhi with Uttar Pradesh state.

"The whole area is barricaded, and lots of police personnel are deployed. We have never seen such police arrangements in our area before," Monu Kumar, a vegetable merchant in Ghaziabad city’s Vaishali area, told Sputnik.

"Yesterday, it was Republic Day. Most of the shops were closed. We were supposed to buy vegetables from Ghazipur Mandi (market) today. But we can't go there," he added.

"There is no business today," Kumar said while pointing to his bicycle cart covered in tarpaulin sheets.

"Prime Minister Narendra Modi must do something now," said Sushil Kumar, another vegetable seller, adding: "If a child in a family doesn't agree with something, first, parents try to convince and bargain with them. Later, they show strictness. Even then if the child disagrees, parents have to change that thing.

"Now, the protest is not hurting only farmers but our livelihood too. Modi is in a prominent position. He needs to intervene and do something," Sushil added.

In an attempt to bring protesters to heel before the situation escalates, the federal Home Ministry has ordered the deployment of more than 1,500 troops across the capital, including from the paramilitary. More than 7,000 troops were guarding Delhi on Republic Day, but the protesters outnumbered them by thousands.

The farmers, mainly from Punjab and Haryana states, have been protesting at Delhi's borders - Singhu, Tikri and Ghazipur - since 26 November demanding that the government revoke three farm laws passed during the parliament last September.

The three laws that sparked the controversy are the Farmers' Produce Trade and Commerce (Promotion and Facilitation) Act, 2020, the Farmers (Empowerment and Protection) Agreement on Price Assurance and Farm Services Act, 2020, and the Essential Commodities (Amendment) Act 2020.