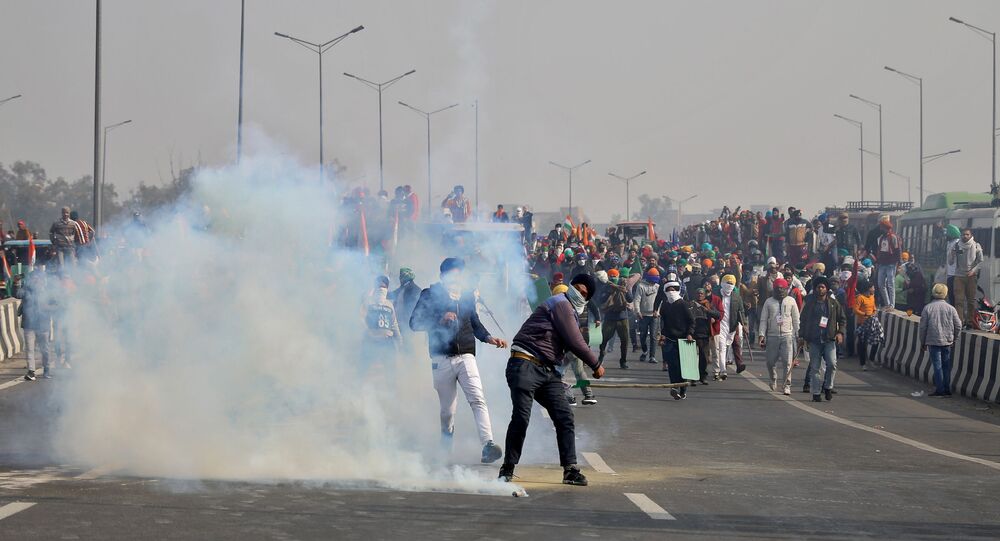 Actress Kangana Ranaut has been an outspoken opponent of the farmers' demonstration against new laws passed by Modi's government, that has been going on since 26 November 2020. During 72nd Republic Day celebrations on Tuesday, a tractor rally by protesting farmers turned violent after police tried to stop those allegedly violating protocols.

For Indians, a day that started on a joyous note turned sour on Tuesday after a rally by protesting farmers in the capital New Delhi descended into violence. The event, in which more than 300 police were injured, elicited a strong response as public figures and celebrities took the lead in condemning the violence.

Widely followed Bollywood actress Kangana Ranaut, known for her outspokenness, posted shocking scenes of what the Delhi police were having to endure and called to account those who were supporting the protestors.

Taking a dig at celebrities - including actors Priyanka Chopra Jonas and Diljit Dosanjh - Ranaut wrote: “I did my best to avoid this but I failed.... I may be a speck in the scheme of things but my failure is enormous... my head hangs in shame." Kangana condemned the act and added, “125 policemen are beaten to death, all hospitalised on Republic Day... price of loyalty and duty.”

I did my best to avoid this but I failed.... I may be a spec in the scheme of things but my failure is enormous.... at least it feels like that .... my head hangs in shame. I could not protect the integrity of my nation. I am no one still I am everyone ..and I am a failure today. https://t.co/ymoL1BnFMj

Scenes posted by Ranaut showed policemen with folded hands beseeching the protesters to stop the violence. Some were seen willfully falling down from the ramparts of the Red Fort in what might have been desperate attempts to avoid being lynched.

125 policemen are beaten to death all hospitalised on Republic Day... price of loyalty and duty .... thank you India 🙏 https://t.co/oW9YadQEyG

Referring to the 2019 large-scale protest against the Citizenship Amendment Act (CAA), Ranaut said that parties which had a vested interest in anti-national movements could have infiltrated the farmers' protest.

“CAA is on hold after so much terror I am sure Farmers bill will also be pushed on back burners, we as a democracy have chosen a nationalistic government yet anti-nationals are winning. Black day for India,” she added.​

This is not a tight slap on @diljitdosanjh face this is what he wanted. He got what he wanted and this nation gave him this on a platter. https://t.co/6TTjxixKe4

Although both the actress Priyanka Chopra Jonas and singer Diljit Dosanjh refrained from commenting on the farmer's violence, many other Bollywood celebs took to social media to condemn the act.

JAI JAWAAN!
DISAPPOINTED IN OUR KISAANS!!
They brought shame to our great nation on our 72nd #RepublicDay Their insinuators ruined our tricolours proud moment to celebrate the glory of the worlds largest democratic constitution & the brave hearts of our nation. #RepublicDay2021

These 2 news items back to back on my timeline explains so much about the state of affairs in our country :) #HappyRepublicDayIndia pic.twitter.com/0Hgm9hwgi3

Singer/composer Vishal Dadlani, casting suspicion on politicians who would benefit were the protests discredited, said it is beyond belief that farmers, who have been demonstrating peacefully for more than two months on the borders of Delhi, should suddenly turn violent.

Does it make sense to you? Farmers who protested peacefully for so many months, even in the face of police violence, suddenly turned violent today? Why?
Just doesn't compute.
Plus, we've seen those in power do this before. Typical play: Send violent stooges, discredit movement.

​According to Delhi police, a total of 300 policemen were injured in the clashes that erupted in various parts of Delhi during the tractor rally. More than 300 barricades were broken, 17 government vehicles damaged, and one farmer's life was lost in the violence. Security has been increased across Delhi and its borders.