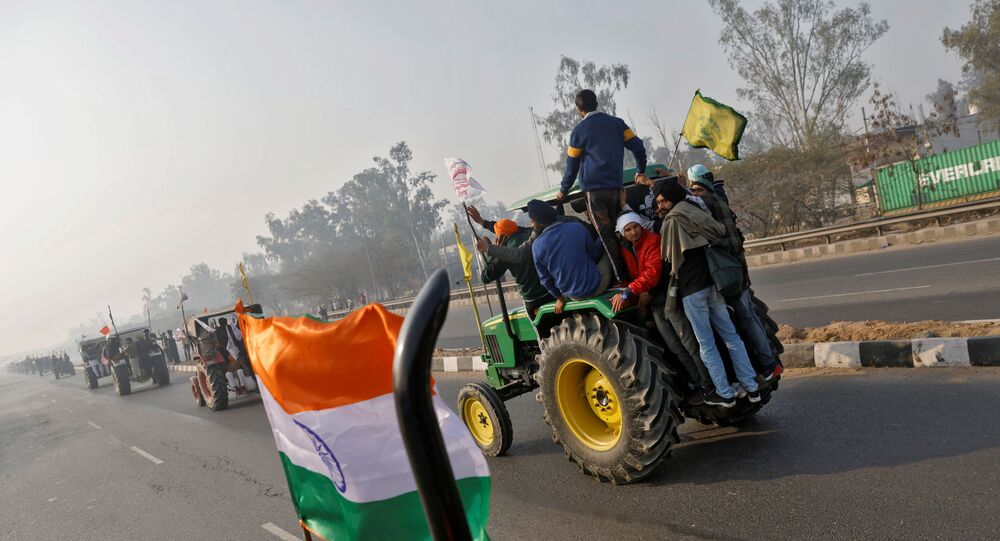 Tens of thousands of farmers in India have been protesting at Delhi borders since 26 November 2020, demanding the scrapping of three new farm laws passed by the Modi government last September. On 23 January, the Delhi Police permitted protesting farmers to peacefully carry out a proposed tractor rally on India’s Republic Day on Tuesday.

A tractor parade by protesting farmers in Delhi on Republic Day turned violent after police tried to stop those allegedly violating pre-approved routes and rules, entering the heart of the capital city.

The Bhartiya Kisan Union's (BKU) Delhi-in-charge Virender Dagar, who has camped at Southwest Delhi’s Dhansa border, has condemned the violence that unfolded during the tractor rally and tells Sputnik what went wrong.

Sputnik: The visuals of the tractor rally protests turning violent and raging on the streets of Delhi have shocked everyone. Did you anticipate this to happen?

Virender Dagar: No, all our leaders and farmers had mutually decided to follow the protocols as agreed with the Delhi police. We were not expecting it to turn violent and it seems that some political party is involved in it. Somebody has added fuel to the fire and manipulated the youngsters. This is not in favour of farmers' protests.

Violence isn’t the solution to anything and this shouldn’t have happened. If we would’ve to do a violent protest, we wouldn’t have waited for two months protesting in the cold weather of Delhi. We never wanted to take the path of violence.

Sputnik: How did all this start and what didn’t go according to plan?

Virender Dagar: Initially, we were seeking permission to rally at the outer ring road of Delhi, which didn’t happen. Whatever route was decided by the Delhi police, we followed that.

We started the tractor rally at around 8:30 am (IST) from Southwest Delhi’s Dhansa border and were following the instructions. Even police officers supported us in this by making a human chain throughout the rally route.

Sputnik: How are you trying to bring the situation under control?

Virender Dagar: We are calling up those farmers who broke the protocol and urging them not to create violence and return to the protesting site. All our leaders will hold a meeting to sort this matter.

Sputnik: Will you continue with the protest despite the violence in Delhi?

Virender Dagar: Yes, we will continue to protest till the government repeals the farm laws.