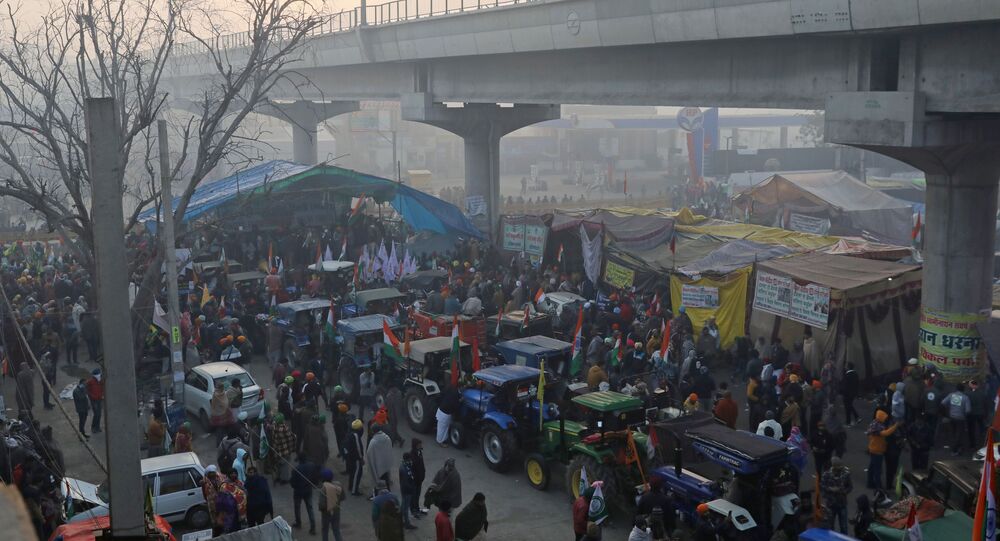 NEW DELHI (Sputnik) - Indian police have barricaded New Delhi for celebrations marking the 72d Republic Day, but it was unable to prevent protesting farmers from entering the city, a Sputnik correspondent reported on Monday.

A caravan of vehicles and scooters, marked with flags and placards with anti-farming law slogans, has entered New Delhi, where activities for the national day are underway, including a military parade and address of Prime Minister Narendra Modi and other high-ranking officials.

Protesting farmers use loudspeakers to voice their demands.

Indian farmers have been protesting for several months now against three new pieces of legislation that they fear will drive their revenues down by revoking state-assured pricing safeguards.

© REUTERS / ADNAN ABIDI
Farmers Swarm India's Financial Capital Mumbai Protesting Modi's Farm Reforms - Video
New Delhi has been the epicentre of protests since the government passed the controversial legislation last September. The legislation intends to give farmers the freedom to set prices for what they produce and trade directly with private businesses without the government's middleman, the Agricultural Produce Market Committee.

While shorter supply chains are generally considered a positive thing, the Indian regulator also used to supervise the supply-demand balance. Farmers now fear that corporate buyers will take advantage of the free-fall supply and the annulment of government-assured minimum prices to keep the prices as low as possible.