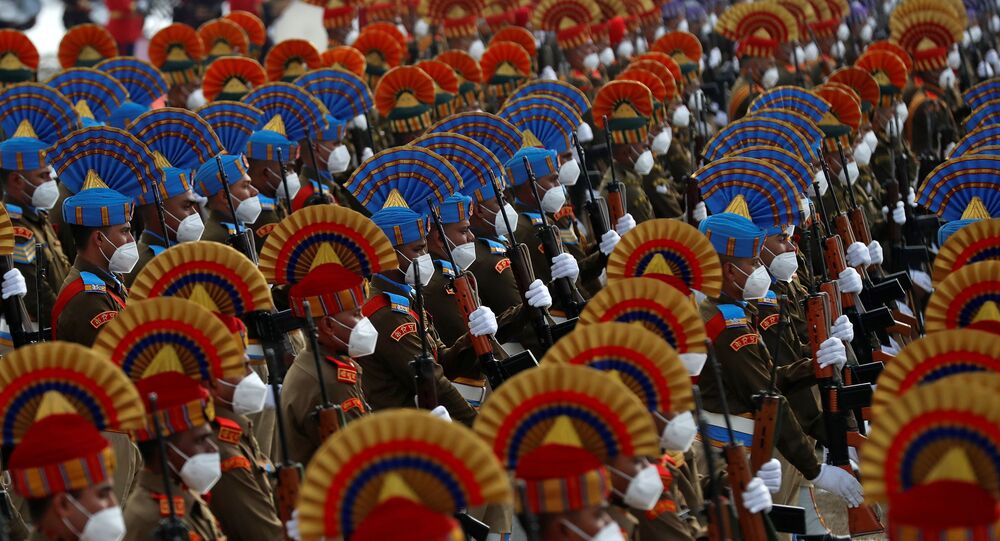 India has observed Republic Day every year since 26 January 1950, when the nation's constitution came into effect. The state holiday is marked by a parade on the historic Rajpath in Delhi to showcase the country's military might.

The ongoing COVID-19 pandemic has cast its shadow on this year's Indian Republic Day celebration plans as compared to previous years. This time all preparations have been made keeping in mind coronavirus protocols.

No Foreign Leader as Chief Guest

As a mutated coronavirus strain continues to spread through the United Kingdom, British Prime Minister Boris Johnson had informed his Indian counterpart Narendra Modi about his inability to visit New Delhi to attend the Republic Day parade as the chief guest. Had he attended the ceremony, he would have been the first British PM in 27 years to be the main guest at India's Republic Day.

This is the first time in the past decades that India will celebrate its Republic Day without any foreign leader as chief guest. Last year, Brazil's President Jair Bolsonaro was the chief guest.

Associate Professor Rajesh Jha of Delhi University told Sputnik, “These are trying times, and the whole world is struggling to get life back on track. It is unfortunate that due to coronavirus, India will not be having any foreign chief guest at the Republic Day parade. Having said that, this is not the first time such a scenario has occurred. Way back in 1966, there was no chief guest at the national event due to the death of the then Indian Prime Minister Lal Bahadur Shastri (11 January 1966) in Tashkent and the demise of nuclear scientist Homi Bhabha (24 January 1966) in an air crash.”

This year the Indian government has issued new guidelines for the Republic Day parade. To begin with, the route of the parade has been cut by more than half. On a regular Republic Day, the full-fledged parade drill covers 8.2 km, but this time the route is 3.3 km.

Tthe number of children and folk artists allowed to take part in the drill has also been cut. The number has been capped at 400, as compared to over 600 last year.

“The Republic Day parade fills the heart of every Indian with a lot of pride and nostalgia. This day is a reminder to all the coming generations that the Constitution was adopted by the Indian Constituent Assembly on 26 November 1949, and it had come into effect on 26 January 1950 with a democratic government system,” Political Science Professor Ashutosh Jha of Delhi University told Sputnik.

The popular motorcycle stunt performed by Army and paramilitary personnel forces has been cancelled. Similarly, the size of the marching contingents has been reduced from around 144 in each contingent to around 96.

“I would like to add that in the present scenario the Indian President and Indian Prime Minister should have just addressed the citizens of this nation via television and called off the parade completely. India should have followed the US example, they had no 4 July celebrations. A lesser crowd or no crowd is better for us as a nation,” Professor Ashutosh Jha said.

Flight lieutenant Bhawana Kanth will become the first female fighter pilot to take part in the Republic Day parade. Kanth, currently posted at a Rajasthan airbase and commissioned on a MiG-21 Bison fighter plane, will be a part of the Indian Air Force's (IAF's) tableau.

India’s health minister had called it a proud moment for the entire country.

Fresh guidelines have been issued for the parade under which all spectators will be seated according to social distancing rules. They will have to wear masks at all times.

Only 25,000 spectators will be allowed as compared to 115,000 last year, as the strength of the audience has been reduced. Children below 15 years old will not be allowed entry. Thermal screening would be done at all entry points to the parade venue.