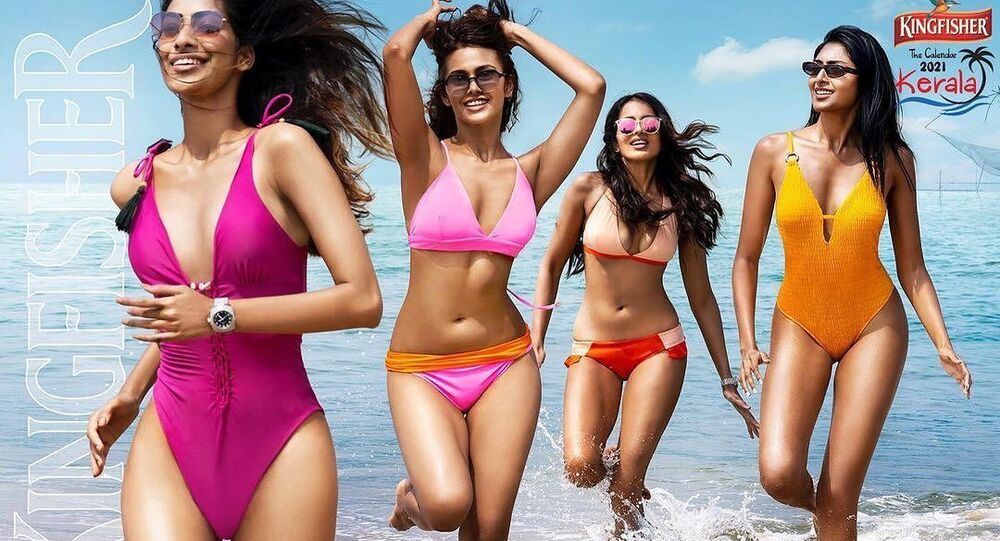 Bikinis are still a taboo in most parts of India, where exposing one's skin is considered a breach of culture and moral values. Nevertheless, Indian women are gradually shedding their inhibitions and embracing beachwear like other normal clothing, thanks to models who have been at the forefront in the battle against moral policing and body-shaming.

For 22-year-old budding model Gehna Mahiarya from Udaipur city of the western Indian state of Rajasthan, doing a bikini shoot for the 2021 calendar of one of the country's best-known beer brands, Kingfisher, was a “liberating” and “empowering” experience. Hailing from a conservative Rajput caste family, it wasn’t easy for Gehna, but with the support of her family, she is now pursuing her dream of becoming a top model.

"It's super empowering to be in a bikini. You let loose, feel free and stop feeling like you need to hide your body away from the light. I was super shy of wearing swimsuits before I did the Kingfisher calendar. But once I did it, I can say, I love my body in any swimwear and can walk around proudly in it wherever I am,” Gehan tells Sputnik.

Coming from a Catholic family, Adline Castelino, 22, also experienced the challenge of gaining confidence and feeling comfortable in her own skin.

“The first time I wore swimwear was during a pageant and coming from a Catholic family, I had never worn one before. Doing a swimwear shoot for the first time for Kingfisher Calendar helped me feel liberated. Because of people’s adverse reaction, we think several times before actually donning swimwear,” Adline says.

Shedding inhibitions and fear of judgement around wearing swimwear is a tough phase to break through, and Gehna did it all with enthusiasm.

“Regardless of other people's opinions or sometimes even your own judgements, you have to decide that you’ll wear whatever you love. I learned to take myself by the hand and say, 'Yes, you’re worthy and sexy, and you can wear that',” Gehna says.

25-year-old Kingfisher Calendar 2021 model Krithika Babu, who has walked the ramp for India’s top designers and was also first runner up in the Miss India - South pageant in 2009, says taking the plunge is tough for every woman.

“I’m someone who could possibly live on the beach in a bikini 24/7. But for the longest time, I was extremely hesitant to wear one and this stemmed from what society may think or say,” Babu tells Sputnik.

“This was at a time when it was uncommon for Indian girls to wear a bikini and walk around. That led me to feel like I shouldn’t be wearing one. But it was modelling that helped me feel confident to get into a bikini. I felt that I had found a place where I feel safe to wear a bikini and flaunt it without a care in the world,” Babu shares.

However, Babu couldn’t completely escape petty condemnation. “Be it my far-off relatives or friends, they always have something unpleasant to say about the pictures being posted online. But my parents understand that my profession requires me to wear a bikini and are rather forward-thinking. That gives me the strength to withstand the unwelcome comments from everyone else,” Babu tells Sputnik.

One of the biggest issues that models experience is body-shaming and criticism every time they post a picture or video of themselves in swimwear.

“I was never really comfortable in a bikini mainly because I’ve always been skinny. Every time I posted a picture of myself in a bikini, even if it’s from a trip with friends, I always had to read comments on my body like 'What’s there to show' or 'too flat'. This made me uncomfortable in a bikini. Then came a point where I started to ignore the negative comments and started embracing my body the way it is,” Anukreethy tells Sputnik.

“There are still people who comment and talk about my stretch marks, my skin not being smooth, too flat (again) and the list goes on.”

In the case of Gehna, people didn’t spare her any body-shaming. “I’ve been fat-shamed before, and skinny shamed now. I’ve stopped caring about what people have to say about my body as I know how well I’m treating my body. It’s always good to cut out the white noise and not pay attention to it because it’s not like they are going to stop,” Gehna concludes.

As Priyanka Chopra Opens Up About Bullying, What Other Bollywood Celebs Were Intimidated as Kids?