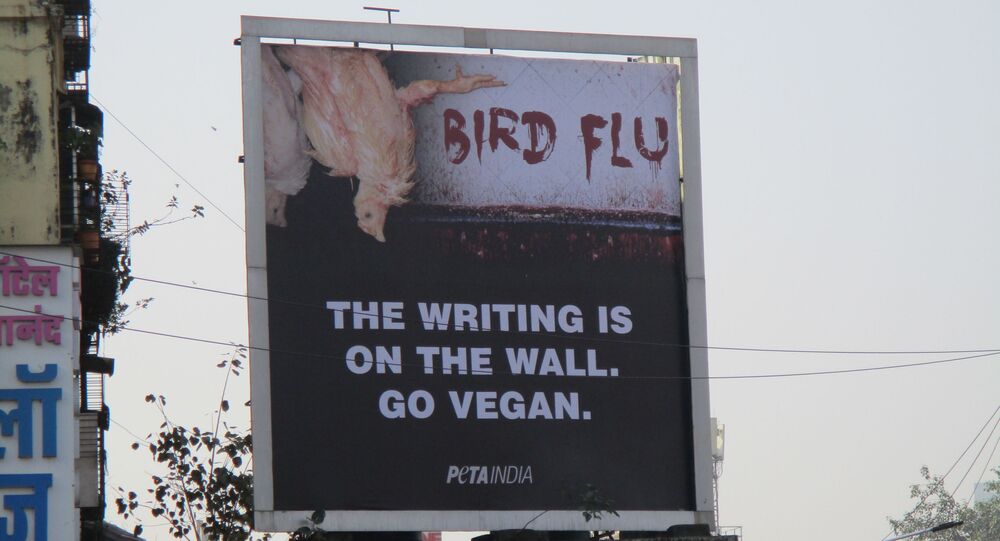 The outbreak of bird flu or avian influenza has put authorities in India on high alert, as people have been told to avoid eating meat, while tens of thousands of birds have already been culled.

People for the Ethical Treatment of Animals (PETA) has responded to India's raging bird flu problem by erecting billboards in several cities urging people to combat the deadly disease by becoming vegetarian.

On Friday, PETA India Vegan Outreach Coordinator Dr. Kiran Ahuja told Sputnik that the move follows the detection of two strains of the virus in the country – H5N1 and H5N8. The former has a 60 percent  mortality rate.

“There are no specific words for vegan in regional languages so we have laid emphasis on people becoming vegetarian,” she said.

The billboards have been put up in cities including the capital New Delhi, Mumbai, Bhopal city in Madhya Pradesh state, Chandigarh city in the north, and Thiruvananthapuram in the southern state of Kerala.

Dr. Ahuja said, “Confining and killing animals for food has led to pandemics that not only kill animals but also threaten the health of every human being on the planet. People must avoid meat like plague.”

Scores of birds, crows, and eagles are dying across India. Samples taken from dead birds have confirmed that avian flu is rife, putting the authorities on high alert. Tens of thousands of birds have already been culled in the affected states.