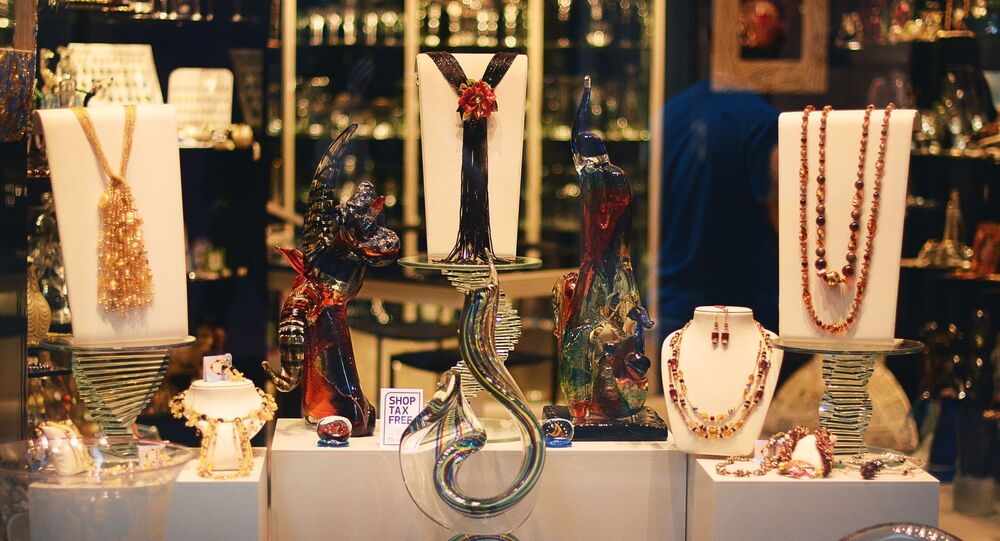 A man entered a jewellery shop on Tuesday while wearing a personal protective equipment (PPE) kit and stole cash and jewellery. Police learned about it when the shop owner reported the incident on Wednesday, and a case was registered.

A man has been arrested in the Indian capital, New Delhi, for stealing cash, gold and diamond jewellery worth INR 200 million ($2.7 million) from a jewellery showroom.

The 25-year-old carried out the burglary in Delhi’s Kalkaji on Tuesday wearing a PPE kit, generally used by medical practitioners these days at COVID-19 related medical facilities.

A senior police official told Sputnik on Friday that the accused has been identified as Sheikh Nur Rahman, who worked as an electrician-turned-technician at the showroom.

"The CCTV footage of the showroom was scanned and 10 teams involving about 100 police personnel were assigned the task to nab the accused,” he said.

"The camera footage shed light on the role of an insider, as the miscreant didn't have trouble getting in or opening the security racks," the official added.

He further mentioned that the CCTV footage revealed that the burglar had exercised the utmost calm in the process.

"The most important thing that clicked was that the burglar knew the size of the screwdriver required to open things. He was even seen drinking water, which indicated that he was in no hurry to move out from the showroom," the officer said.

Everything has alternative usages. In this case theft of jewellery worth ₹ 13 crore wearing PPE kit in Delhi's Kalkaji area. pic.twitter.com/534sRgCS0K

The owner of the showroom told police that Rahman was the only one who had the knowledge and skills to execute such a thing.

"Rahman was on leave, which even raised more suspicion on him. His call detail records and other technical things were traced. After which a plan was laid out, and he was nabbed from his friend’s home,” the police officer said, adding that all the stolen goods have been recovered from him.

During the interrogation, Rahman revealed that he committed the burglary because he wanted to take revenge after being humiliated and harassed by his colleagues.

"He was planning the heist for the last three months. During which he allegedly studied the layout of the entry and exit points, the position of the guards and all other fine details," the official said.

Later, Rahman invested about INR 50,000 ($685) into buying equipment such as hydraulic iron cutters, gas cutters, a suitcase, backpack, and rope, among other things to complete the task.

"On 10 January, he (Rahman) took a 15-day leave. He booked a train ticket and went home (located outside the city). But he quietly returned to Delhi within a week. On Tuesday, around 9.30 pm, he left his Delhi accommodation while wearing a PPE kit, along with a suitcase and the burglary tools in the backpack," the official said.

How the Heist Was Executed

After climbing the terrace of a mostly-vacant structure adjoining the jewellery showroom on Tuesday, he waited there until 11.00 p.m.

"Once it turned silent, he reached the roof of the showroom. Further, using hydraulic iron cutters, he removed the fibre and tin sheets of a small opening and reached the generator room on the top floor," the official said.

Later, he used the same cutter to break open an iron grill and an iron shutter to gain entry into the actual showroom.

"He (Rahman) knew that low volume and high-value jewellery was kept on the ground floor. He directly went to that floor. He disconnected the wires of only one CCTV camera on the floor and used the screwdriver and opened the safes easily. He fled away with the items using the same way he had used to come in," the official revealed.

According to police, Rahman planned to leave for Kolkata city on Thursday by train but he was nabbed before that. Rahman has been booked for theft and trespassing.