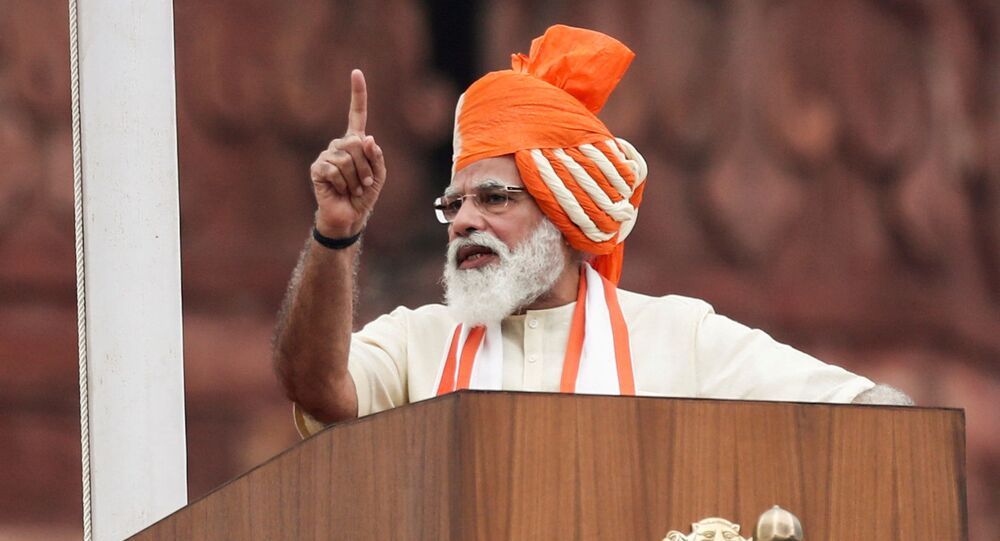 Prime Minister Narendra Modi has been in the firing line of opposition leaders for not being assertive enough in dealing with China amid the ongoing military standoff between the two countries. However, Professor Zhiqun Zhu from Bucknell University, US, says that nationalism could just escalate tensions.

Indian Prime Minister Narendra Modi has done well to keep the “nationalist mood” in his country in check amid the ongoing military standoff between the Indian and Chinese armies at the Ladakh border, Professor Zhiqun Zhu, the head of Political Science and International Relations Department at the US' Bucknell University, has told Sputnik.

The academic was reacting to Indian opposition parties’ repeated criticism of Prime Minister Modi's policy towards China, which many in India have described as being “too soft”.

India’s key opposition parliamentarian and Congress leader Rahul Gandhi has often accused Modi of “surrendering” India’s sovereignty to China as well as going back on his pre-election pledges of being “tough” on Beijing.

While Modi was one of the loudest critics of the previous Congress-led federal government (over China) when his party BJP was in opposition, the tables turned once he assumed power. Now, the opposition often reminds him about his famous slogan of showing “red eyes” to Beijing.

Not only the opposition, but some even within Modi’s own BJP have described his handling of the border standoff as one of his “greatest blunders”.

However, the Bucknell University academic is clear that being confrontational with China is not the solution to resolving the border disputes.

“It is in both countries' interest to remain engaged, keep the dialogue open, and focus on areas where they can cooperate,” suggests Zhiqun, pointing out that even Chinese President Xi Jinping had been wise enough to not fall for nationalists within China who have been clamouring for reclaiming some of the territories controlled by India but claimed by Beijing.

He, however, blames both India and China for letting the ongoing border standoff continue, noting that New Delhi has been “scared” of the tilting balance of power in favour of China, more so in a post-COVID era.

“China's rise presents many challenges to India, but India and China also share many common interests. The biggest common denominator between India and China is development,” says Zhiqun.

“So the choice for India seems to be whether it wants to treat China as an enemy and counter the so-called threat from China, or seek opportunities to work with China on issues of common concern such as climate change and economic development,” the academic said while talking to Sputnik.

China reported GDP growth of 2.3 percent, its slowest in four decades, in new official statistics released on Monday. However, it is the only major economy to have experienced growth in 2020, when other economies, including that of India, were battered due to COVID-induced lockdowns.

Expect Biden to be “Less Confrontational”

Zhiqun has reckoned that the incoming Joe Biden administration in the US would be “less confrontational” than the outgoing Donald Trump government when it came to backing New Delhi against Beijing.

“It is too early to tell, but most likely Biden will take a less confrontational and more predictable approach in foreign affairs,” he noted.

“The Biden administration will seek cooperation where it can and defend American interests where it must,” he feels.

The Trump administration' years have witnessed the intensification of the US-India defence and economic partnership, with New Delhi seen as abandoning its previous inhibitions of entering into a close partnership with Washington.

Over the last year, the US has also backed efforts to create a multilateral alliance of democracies in Asia, which many of its critics say is directed at checking the rise of Beijing, even as it itself has been accused of being less involved on the global stage than in previous years.

Zhiqun also claims that India was right in re-aligning its foreign policy in anticipation of a “multipolar” world order, referring to Indian External Affairs Minister S. Jaishankar’s previous reported statements in response to attacks by his country's opposition leaders.

“The reality is the world is moving towards a multipolar system, in which several players will co-exist, such as the United States, China, EU, India, Russia, Japan, ASEAN, etc.  I think it is appropriate for India to re-calibrate its foreign policy in anticipation of a multipolar world,” the noted academic suggested.