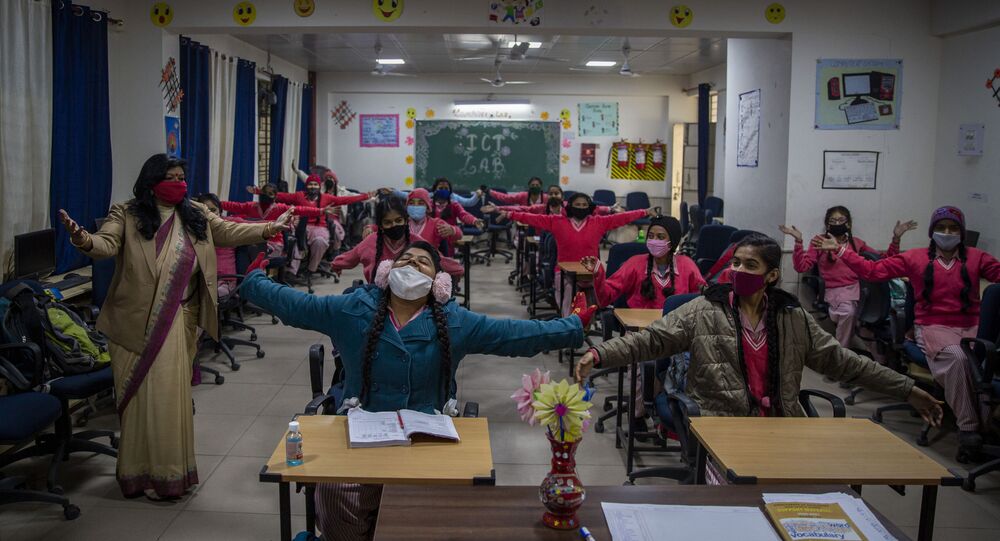 'I Am a Little Nervous,' Says Parent as Delhi Schools Reopen After Covid Break

The Government of India imposed a national lockdown on 25 March to curb the spreading of COVID-19. It involved shutting down all educational institutes and industries as well. Though the lockdown restrictions started being relaxed from 31 May last year, the pandemic still remains a big concern for the general public.

Having remained closed since last March, schools in India’s capital city finally reopened on Monday this year for students who are set to take the crucial board exams soon.

The Delhi Government has allowed the schools to reopen for students of grade 10 and 12 while ensuring that they comply with the COVID-19 protocols. It is mandatory for students to have written parental permission to attend classes before they are allowed to attend.

In the morning, to encourage children and parents, Delhi’s Education Minister Manish Sisodia sent out a greeting to all of them as they returned to their classrooms after months.

Best wishes to the students of class 10&12th who are going to visit their school today after 10 months...

(though it's only for limited purpose and with covid protocols..) But still...

I am glad that schools are opening in Delhi today. pic.twitter.com/vmLRIkVl68

According to a school principal, online studies actually don’t allow the kind of learning that a classroom offers.

Speaking about safety measures, Delhi’s Modern Public School Principal Alka Kapur says the students probably should travel to school in their parents' private cars rather than by public transport.

“The classes will be conducted in a staggered manner. This will mean that at any one time only a certain number of students would be present in the class which would allow the school authorities to maintain proper distancing among the students,” Kapur told Sputnik.

“Any student or staff who shows any sign of sickness, will be isolated and treated quickly. The consent of parents is essential for their child to come to school,” she added.

According to Dharmendra Kumar, a senior school teacher of a Delhi government-run school, all pupils have to undergo thermal screening when they enter their school. “Children should wear masks, carry an extra mask and sanitizer. We have sanitised our entire premises. Restrooms will be sanitised at regular intervals,” he said, explaining the precautions being taken for so that schools could reopen.

​Many parents expressed their reluctance to send their children to school since the pandemic is far from over and the infectious disease is causing concern in all quarters.

Talking to Sputnik, Chhavi Jain, whose daughter studies in year 12, told Sputnik that she was not in favour of sending children to school, as they may be exposed to a big risk - especially during their approaching entrance examinations. “We want to continue with online classes.”

She said that although the schools have opened according to government guidelines, “it is not a feasible idea”.

“It is a fact that going to school leads to an all-round development of the students. But considering the present situation, we wish to abstain from sending our child to school," Jain added.

She shared that most of the parents and their children in her neighbourhood were not willing to send the kids to school. “But they will have to go for subject practical exams as and when required. However, the best thing is the school is not putting pressure on the children to return to the premises."

Students, Parents and the Covid Guidelines

Meanwhile, some students shared that anyone having symptoms such as cold, cough, ache or fever has been advised not to come to school. They agree that the main reason for students being called to school is to prepare and clear doubts for practical and board exams.

Tanya Mehta, a class 12 student of Delhi’s St Anthony School, told Sputnik: "In the parents-teachers meeting, it was said that students of only one section of the class would be called each day. A roster has been rolled out accordingly. Classes would start from 8.30.

“It was mandatory for all students to carry a mask and sanitiser every day. No kid would be allowed to share their stuff with any other kid.”

Some parents expressed their unwillingness to send their children to school as no vaccinations are available for people younger than 18.

Pooja Sharma, one of the sceptical mothers of a grade 10 student, told Sputnik, “There is no news of vaccinations for children of 18 years and below. So, I am a little nervous about sending my son to school.”

The two vaccinations available in India cannot be given to children below the age group of 18.

According to media reports, Covishield vaccination by Serum Institute of India (SII) is permitted to people above 18 years of age. The government recently also rejected Bharat Biotech's vaccine - Covaxin - as a treatment to people aged under 18.

An official with the Delhi government said the national capital city is just complying with the central government’s directions.

On 31 December, India's federal Education Minister Ramesh Pokhriyal announced that board exams for grade 10 and 12 will be held from 4 May to 10 June and the results will be announced by 15 July.

"Dates for board exams were announced by the Indian Education Minister. Everything is being done as per the guidelines of the Central government,” the Delhi government official told Sputnik on condition of anonymity.

“Some students who come to the Delhi government schools are not from a well-to-do background, they need laboratories to practise for their science practical exams, which cannot be done through online classes. However, in Delhi schools physical attendance has not been made compulsory."

Asked why classes for other students haven't been reopened, the official said, "Discussions will be held with all stakeholders involved such as parents, students, experts, teachers, different school education boards, education ministry before announcing any decision."