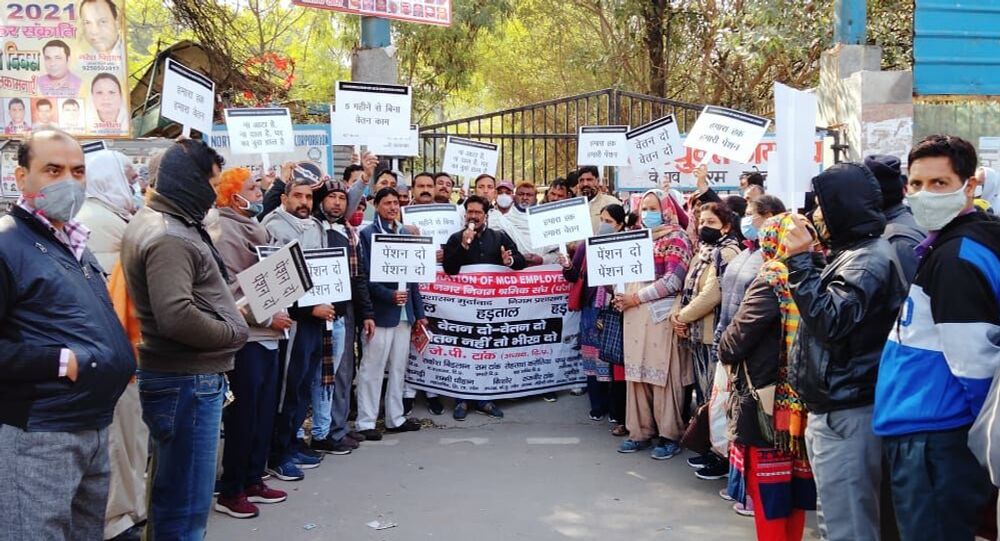 As sanitation workers have not been collecting garbage in parts of the Indian capital for the past 10 days, Delhi residents are now staring at a health and sanitation crisis.

“I have a chemist shop outside Maulana Azad Dental College, New Delhi and piles of garbage are stocking up in front of my shop, giving off a foul smell. I have made many phone calls in the department, but nobody is bothered. The garbage dump is increasing the risk of disease”, Gaurav Sahu, a chemist shop owner, tells Sputnik.

Millions of Delhi residents have witnessed similar strikes by sanitation workers since 2015 for reasons not very different - non-payment of salaries, in some cases up to six months.

It's not just the roads that are littered - the strike is also affecting door-to-door garbage collection.

“This time we hired people to collect garbage from home and clean our societies. But garbage is not collected even from collection points and now garbage is overflowing at the dhalaos/kudaghar or collection bins also on the streets and by-lanes”, B.S. Vohra, president of the East Delhi Resident Welfare Association’s Joint Front, says.

Dhalaos are large three-walled concrete structures meant for the collection of garbage from a locality or market.

Municipal Corporation of Delhi: 'Leaders Are Politicising the Matter, No One Cares for Workers'

Due to political differences between the Delhi government led by the Aam Aadmi Party (AAP) and the MCD, led by the Bharatiya Janata Party (BJP), the Indian capital has witnessed regular strikes by sanitation staff since 2015, when the AAP government came to power in the city.

“This is our eighteenth protest since 2015. Nobody cares for us, we are the victims of AAP-BJP politics”, A.P. Khan, the convener of the Confederation of the Municipal Corporation of Delhi (MCD) Employees Union, tells Sputnik.

The matter always lands in the Delhi High Court and when reading the court directions of 2016, 2018, and 2020, one notices that hardly anything ever changes.

“Each time, the high court has had to remind the civic bodies and the government that they must pay the salaries and pensions, and as subsequent protests reveal, little heed is paid to these orders”, reported The Wire.

Last week, the Delhi government said it had allocated $128 million to pay the salaries of the MCD. However, MCD workers confirmed to Sputnik on Monday morning that so far they have not received any money in their accounts.