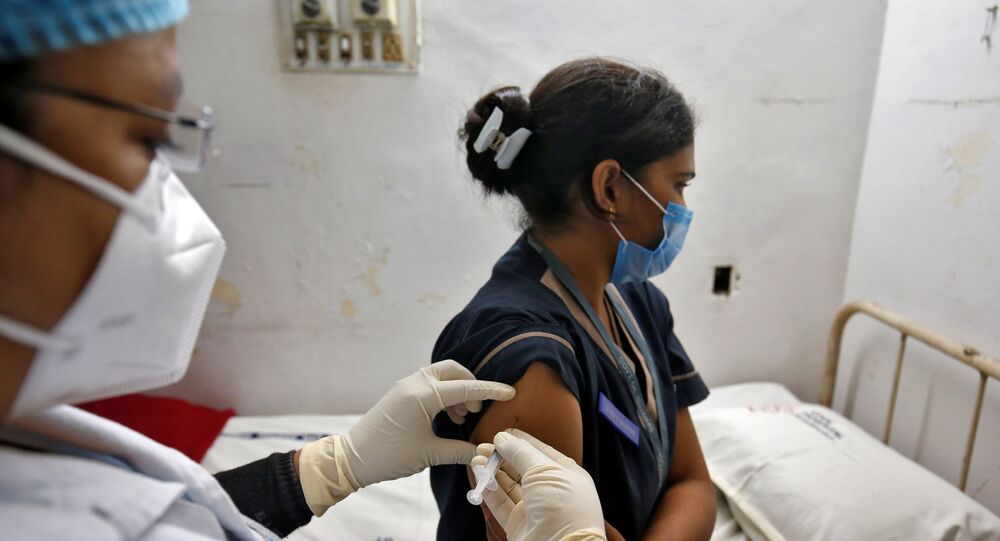 The first phase of India's massive vaccination drive formally began on Saturday, as three million healthcare workers are waiting their turn to receive the first shots. UK's Covishield and Indian-developed Covaxin are the two vaccines being administered to the country's 1.36 billion people over the coming days.

India on Saturday kick-started one of the world's biggest COVID vaccination drives, with Prime Minister Narendra Modi inaugurating the first phase of the country's vaccine programme, which is slated to witness nearly 30 million Indian healthcare workers receiving either Covishield or Covaxin.

"There are more than 100 countries in the world which have a population of less than 30 million. But India, in the first phase itself, plans to inoculate 30 million of its citizens," PM Modi said in his video address to mark the vaccine drive's inauguration.

​Around 300,000 healthcare workers at 3,006 sites across India are scheduled to receive the jab on Saturday.

"Since the call, I have been a little nervous. There is a sense of fear among us. As the time is coming near the ward, my heart rate is increasing. The fear of reaction is there," Paramjeet Kaur, a healthcare worker, told Sputnik before going in to receive her vaccine shot.

Sanjeev Sharma, another healthcare professional, says that he was excited at the prospect of receiving the shot.

"I feel it is for the nation and we [healthcare workers] had to take the initiative to build the confidence of the entire nation," said Sharma.

© Sputnik / Advitya Bahl
Sanjeev Sharma, who works at the cash counter of the Rajiv Gandhi Super speciality Hospital in Delhi

Shaheen Riyazuddin, a nurse, said "I was anxious but it's done now. We will have to monitor ourselves for the next 28 days before we get the next dose. We haven't been given any kind of instructions to follow. I feel its a victory for the nation."

India's vaccination programme will be divided into phases, which will witness its entire 1.3+ billion population vaccinated with either Covaxin or Covishield. While Covaxin was conceptualised in the countryby Indian pharmaceutical company Bharat Biotech, Covisheld was jointly developed by the University of Oxford and British pharma company Astra Zeneca. In India, Covishield is being manufactured by the Pune-based Serum Institute of India (SII).