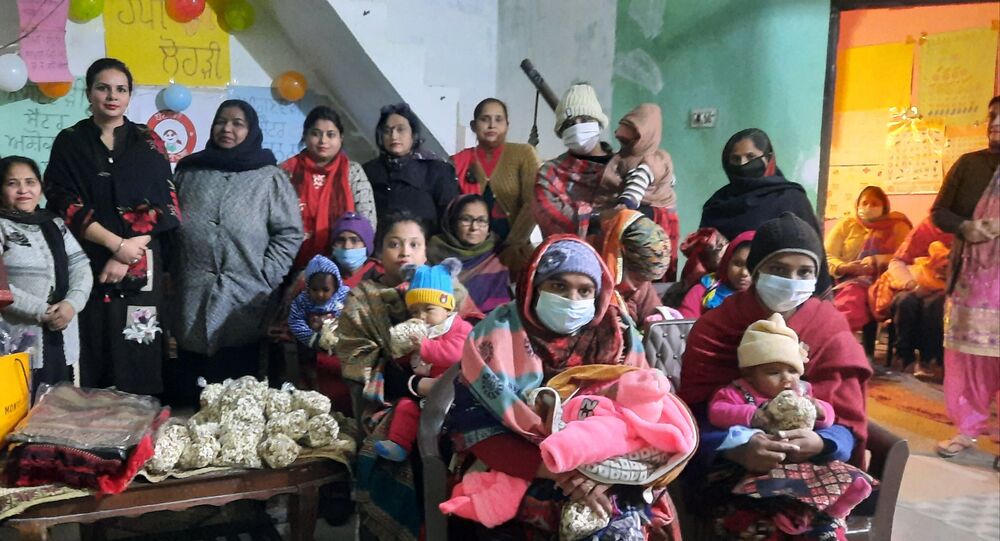 North India's biggest winter festival Lohri is being used to raise awareness about baby girls, with most northern states facing the huge problem of female foeticide leading to an imbalanced sex ratio. This time, Lohri is devoted to celebrating a daughter's arrival in the family by social activists to counter a strong preference for sons.

For 26-year-old Sehaj (name changed), the birth of her daughter was a catastrophe. Already a mother of two girls, she could ill afford to another daughter.

Sehaj, who has to do odd jobs to make ends meet in the Union Territory of Chandigarh, has received abuse from her family since bearing the girl.

"The pain of bearing a girl child is as great as for a boy. But the baby girl has no value for my family, especially my mother-in-law. The girl is seen as just a burden, an unwanted birth", says Sehaj as  tears well up in her eyes.

She was among the ladies invited for a community celebration by some female social activists who are trying to change how people feel about daughters on the occasion of the Lohri festival, the winter’s biggest festival that marks the end of the cold season in north India.

It’s a stigma that runs deeper in some Indian states than others.

A look at the country’s sex ratio is an indicator of the states where daughters are discriminated against. A boy's birth, however, is celebrated with great joy, as boys are seen as continuing the family line.

The situation is such that quite often female foetuses are found dumped in bins or new-born girls are found abandoned at public places such as temples or hospitals by couples.

In some places such as the north Indian state of Himachal Pradesh, the sex ratio over the past five years stands at 875 girls for 1,000 boys. In the neighbouring Punjab state it is 895 to 1000. In the union territory of Chandigarh, this girls versus boys ratio is 818 to 1000, according to India’s 2011 census.

The next census, conducted once in 10 years, is due to be carried out this year. Many states have shown more balanced sex ratios in the past 10 years after state governments launched many programmes to save, protect and educate girls.

Haryana, for example, has launched a massive campaign 'Beti Bachao Beti Padhao' (Save Girls, Educate Daughters) and Chandigarh, too, has registered an improvement in sex ratios.

Rampant female foeticide is one of the major social problems that governments in India have been aggressively trying to stop.

“After it became common for women to have ultrasound tests to determine the sex of the baby and get an abortion if it was a female, the government brought out its Pre-Natal Diagnostic Test Act in 1994, making determining the sex of the foetus illegal and promising the severest punishment against doctors or medical staff who revealed a foetus's sex”, former director of health services in Chandigarh, Dr G Dewan, who was responsible for introducing the Act that led to an improvement of the sex ratio, told Sputnik.

“There is a reward of INR 100,000 ($1,360) for anyone who provides information about a medical practitioner doing sex determination tests", he added.

The Act might have put paid to screening the foetus to discover the sex but it has done little to change the mindset.

Dr Tamanreet Kaur, an elected representative of the civic body in Punjab’s Jalandhar city - known for female foeticides - told Sputnik: “When I had a daughter I faced social implications myself, as women would come to me and literally commiserate with me for bearing a girl. This is when I decided that I would try to restore the happiness which should surround a child’s birth.

"For the past three years on Lohri festival, I have invited women who gave birth to a girl to a community celebration, giving them gifts, singing songs around the bonfire on how girls are no less important than boys."

Ashish Bhasin, chef of The Leela Palace in Delhi, told Sputnik, “The Punjabi folkl song for Lohri "Sunder Mundriye Hoye!" is about a man called Dulla Bhatti, who is said to have lived in Punjab during the reign of Mughal Emperor Akbar.

“Like Robin Hood, Dulla Bhatti rescued the innocent from their tormentors, in this case young girls from being trafficked. He used to marry them to suitable boys from the money, which he would steal from the rich. Among the many, there were two girls named Sundri and Mundri who were introduced in this folk song (Sunder Mundriye Hoye…) that celebrates his bravery during Lohri festivities”.

The festival of Lohri traditionally sees thumping celebrations when a male baby is born in the family whereas at many places a girl's birth doesn't evoke similar celebrations.

Social activists such as Dr Kaur are optimistic that their efforts will bring a gradual change in the public mindset and people, especially women, will support the cause for girl child. They usually promote a public slogan: “If you do not bear daughters, where will you get daughters-in-law from?”