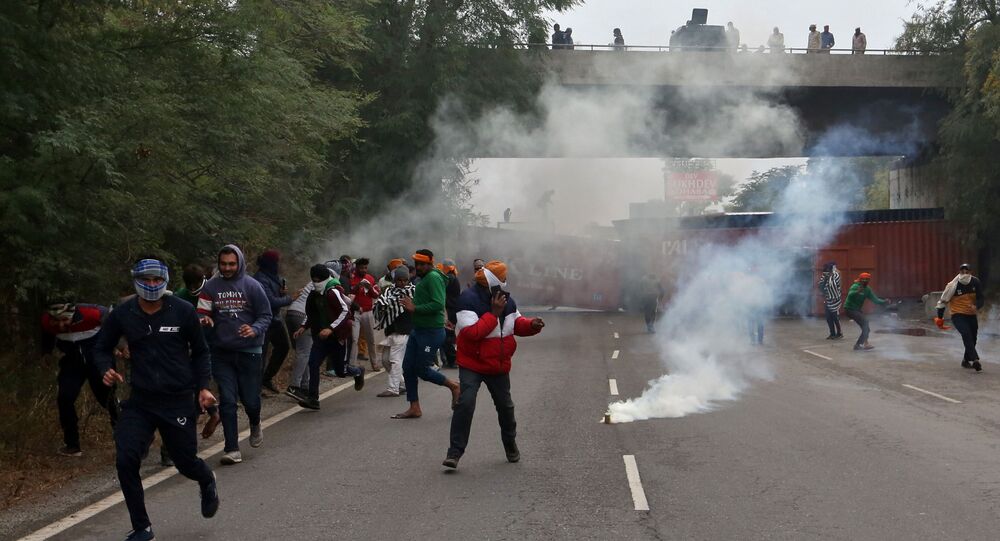 'Who Will be Responsible if Blood is Shed?': India's Top Court on Staying Modi's Farm Reform

Last September, the Indian government passed three agricultural bills provoking anger among thousands of farmers across the country. According to the farmers' union, the law will put them at the mercy of big corporations.

Hearing a collection of petitions challenging the new farm laws, India's top court said on Monday that it is in favour of delaying the implementation of the three farm laws until the Narendra Modi-led government and protesters resolve the issue.

A bench comprising Chief Justice of India, Sharad Arvind Bobde and Justices Ajjikuttira Somaiah Bopanna and V. Ramasubramanian also expressed disappointment at how the government is handling the farmer protests which have been ongoing since 26 November last year.

We are extremely disappointed with the way negotiations are going on between govt and farmers over new farm laws: SC

​Indian farmers have been protesting at different borders of the national capital since November against the three newly enacted farm laws - Farmers' Produce Trade and Commerce (Promotion and Facilitation) Act, 2020, the Farmers (Empowerment and Protection) Agreement on Price Assurance and Farm Services Act, 2020, and the Essential Commodities (Amendment) Act, 2020.

The farmers are protesting because they fear that liberalisation of the agriculture market will end the system of the minimum support price – which the government announces at the end of the harvest season for state procurement.

"You tell us if you will put on hold the implementation of the laws. Otherwise, we will do it. What is the problem in keeping it in abeyance?” asked the Chief Justice of India government representative during the hearing.

"Staying the implementation of laws and staying the law are different. We can always stay executive action under law. Who will be responsible if any blood is shed?” he added while hearing petitions challenging the Farm Laws and seeking removal of protesting farmers from Delhi borders.

The court didn't pass any order on Monday, but it is likely to give a judgement on the matter anytime in the next 24 hours.

"When [farmers] go before the committee, will it be their only demand that the laws must be repealed? If they are not prepared to tell their exact grievances, the committee will not be useful," the Supreme Court said.

​Slamming the government for not taking enough steps to prevent riots happening in the dead of winter, the supreme court said: "People are committing suicide. Who is taking care of water and food? Older people and women are on the ground. Why are old people in the farmer protests? We don't want to comment on the agitation.”

A 60-year-old man killed himself in Chennai in the southern Indian state of Tamil Nadu on Saturday in support of farmer protest in Delhi.

G Perumal left behind a two-page suicide note stating the new farm law would help neither farmers nor corporations.

This is the fifth suicide since farmers launched protests near the national capital Delhi. A 39-year-old farmer, Amrinder Singh, committed suicide on Saturday evening at a protest site on Delhi's border by swallowing tablets of Sulphas, a highly poisonous pesticide. He was rushed to Frank Institute of Medical Sciences but could not be saved.

According to Indian media, more than 60 demonstrators have died for various reasons since the agitation started. Talks between the government and farmers' unions on the new agriculture laws failed to make any headway even after the eighth round of talks. The next round of talk is scheduled to be held on 15 January.