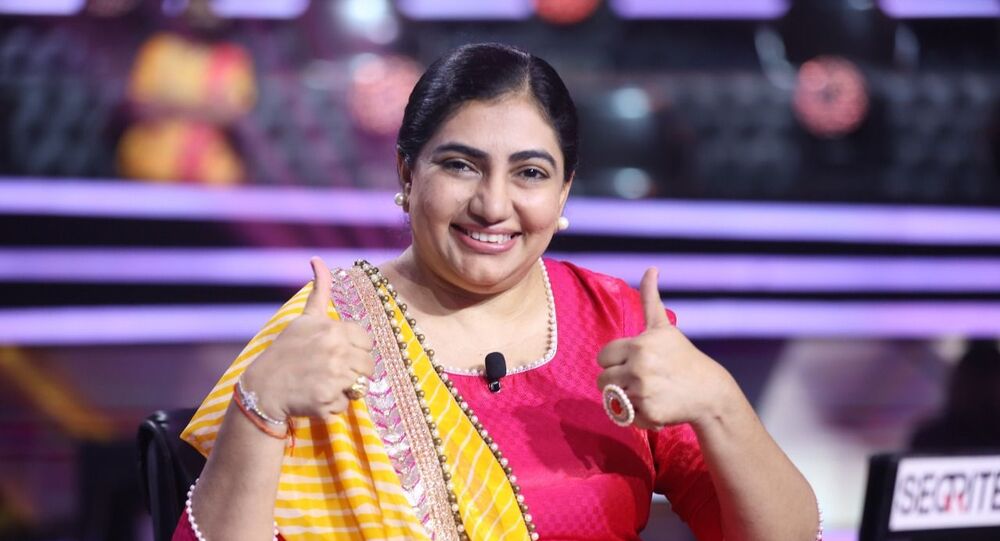 Dr. Neha Shah, a Covid warrior working as frontline worker during the pandemic, has become the fourth contestant to become a millionaire on the popular television game show "Kaun Banega Crorepati" (KBC), an Indian adaptation of the British show "Who Wants to Be a Millionaire?" KBC is hosted by Bollywood megastar Amitabh Bachchan.

Dr Shah answered a question, leading her to win the second-to-last round of the show. However, when she reached the jackpot round, where INR 70 million (approx. $1 million) was on offer, Dr Shah consciously decided to quit the game, taking home INR 10 million.

Overjoyed by her win, Dr Shah tells Sputnik that one of the best parts of her experience was meeting megastar Amitabh Bachchan.

In the video posted on the Twitter handle of Sony Entertainment TV, Dr. Shah can be seen flirting and singing a song ‘Jiska mujhe tha intezar’ for Amitabh Bachchan, leaving him blushing.

AB and our contestant DR. NEHA SHAH share a few lighthearted moments. Watch her on the hotseat, next week on #KBC12 at 9PM only on Sony TV.@SrBachchan @SPNStudioNEXT pic.twitter.com/kXOmIs2LGX

“I was awestruck sitting in front of Amitabh Bachchan. He makes everyone feel so comfortable so that we don’t feel overwhelmed, and concentrate on the game. Indeed, it was the best experience,” says Dr. Shah, who works as a medical consultant at Bhabha Atomic Research Centre and also at her father’s clinic as a frontline worker amid the Covid-19 pandemic.

Talking about how she plans to spend the winning amount, Dr. Shah shares that she would like to give back to society by providing free health treatment to poor people.

“I always aspired to have my own clinic in Mumbai and now I see it happening soon. I want to serve people by organising free health check-up camps to diagnose cancer and diabetes and providing medical treatment at a low cost to pregnant women. Once the pandemic is over, I also wish to take my parents for a trip,” she tells Sputnik.

When the show was launched in India in 2000, watching people become millionaires simply with their power of knowledge inspired Dr. Shah to participate in the game show, which is broadcast on Sony Entertainment Television and the OTT platform SonyLIV.

After over 11 seasons, her dream finally came true in the 12th season.

“Since the inception of the show, I harboured a dream to get through the game show and play with Amitabh Bachchan. I was crazily trying to get through KBC. During that time, there were only landline phones through which we could call for the selection and registration process. I used to make calls at 2am- 3am otherwise the whole day, the line would be continuously engaged,” Dr. Shah says.