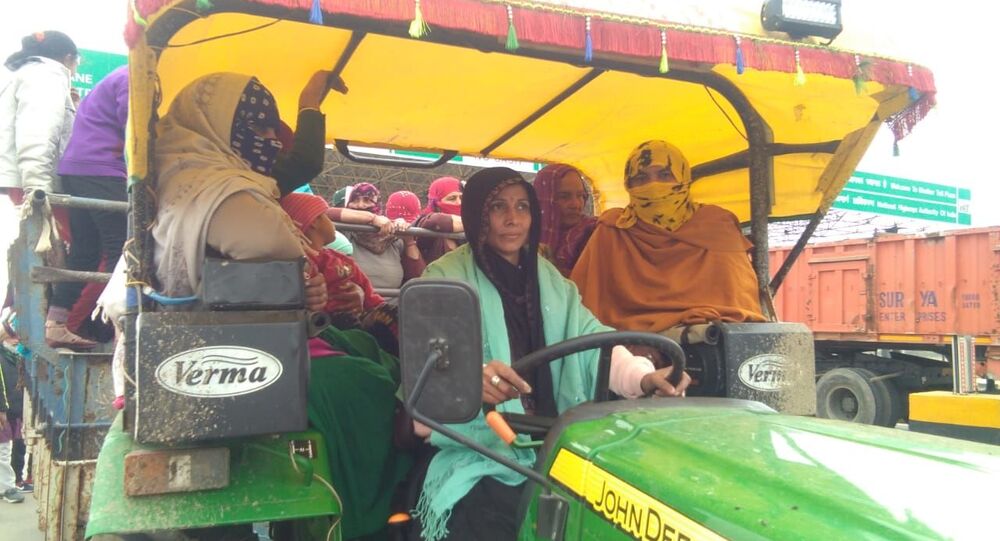 The tractor rally is said to be the prelude to the large protest scheduled for India’s Republic Day (26 January). The Thursday rally began from five different points surrounding Delhi with all five groups of over 1,000 tractors moving out simultaneously, said leaders of Samyukt Kisan Morcha, a joint front coordinating the protests.

Thirty-five-year-old Sheela Devi's normal day would generally include preparing early morning tea and then three meals for the entire family in the kitchen. Throughout the day, she is confined to the compound of her house, doing household chores. But this Thursday is different.

Today, she decided to step out of the house, mounting a tractor and sliding into its driving seat to join tens of thousands of others who oppose the new farm laws.

Sheela Devi is one of the hundreds of women who drove tractors from their villages in Haryana, a state bordering New Delhi, to the border of the Indian capital to protest against the farm laws being introduced by the federal government, which has had the farming fraternity up in arms.

Farmers from different parts of the country conducted a tractor rally today, surrounding the Indian capital with nearly five thousand tractors, sealing off New Delhi from every angle and making it inaccessible by road.

The rally is a part of tactic employed by farmers to exert pressure on the Narendra Modi government at a time when the seventh round of talks has failed to resolve the crisis.

© AFP 2020 / SAJJAD HUSSAIN
Indian Farmers Protesting Near Delhi Pray for Modi to Be 'Wiser' in New Year and Repeal Farm Laws
The protest entered its 43rd day on Thursday in Delhi, with thousands of farmers demanding that the farm laws passed by the Modi government last September be scrapped.

Today, the farmers’ agitation is inspired mainly by the slogan ‘Delhi Chalo’ (Let’s Head to Delhi) to protest against the agricultural legislation.

The laws collectively seek to provide farmers with multiple marketing channels and ensure a legal framework for farmers to enter into pre-arranged contracts, among other things. They were intended to partly liberalise agriculture.

The protesting farmers' unions, however, view the laws as a threat to their livelihood and fear that their landholdings will be taken away by big corporations, along with the elimination of the system of state-guaranteed commodities prices that ensures profitability.

Many women are participating by riding tractors, despite the state having a strictly patriarchal society, where women are frowned upon even if they step out of the house without permission.

The female tractor rally is a brainchild of Sikkim Nain, president of the Mahila Manch, a women’s wing of the Farmer’s Union.

Speaking to Sputnik, Nain said, “When I first mooted the idea of teaching women how to drive a tractor, I was met with a lot of criticism and apprehension. But when women saw me getting into the driver’s seat, they drew a lot of confidence and came out in support.”

She shared the ordeal of women in general in Haryana’s society, as they are normally viewed as family property and not allowed to have a voice or any individual viewpoint.

“We are expected to vote for who the family tells us and not question anything but follow blindly. Women seldom stir out of the house and that too only in company of the men in the family. Even then they keep their face and head covered with a cloth before elders or visitors,” Nain told Sputnik on Thursday while narrating the existing patriarchal setup.

Opening up about how women struggle in Haryana villages, Nain, who has a 17-year-old boy, said she was the first woman to take a stand with the men in their village, and she'd faced a social boycott for this.

Thirty-seven-year-old housewife Mukesh Rajpati from State’s Jind district said, “My hands were shaking when I took to the wheel. Finally, when I managed to follow instructions and drive, it was the biggest victory of my life. Today, l am not just able to drive but contribute to the protest.”

Meanwhile, Suresh Koth, a farmer leader, told Sputnik that they view this protest as a fight for their very survival.

“We have small landholdings and we fear that the big corporate houses (agribusinesses) will eventually grab our land. Small farmers will be forced to commit suicide as they always fail to fight the corporate houses. We would rather struggle against the new laws now than die later,” said Koth.