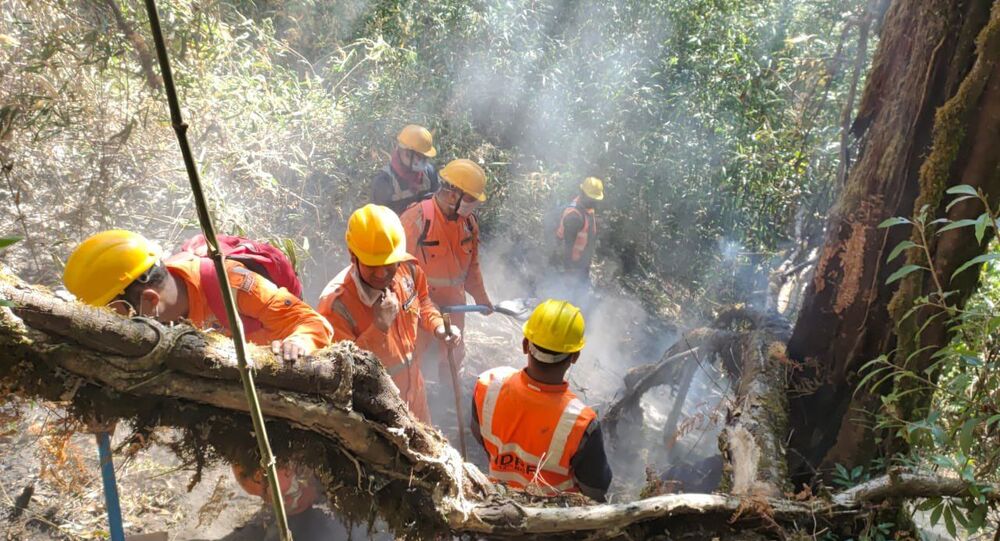 On 1 January, Indian Home Minister Amit Shah took stock of the wildfire situation in the Dzukou Valley along the Manipur-Nagaland border, where a fire broke out on Tuesday.

The NDRF, the apex body for disaster management, has deployed over 60 personnel along with several dozen SDRF workers assisting them.

Speaking to Sputnik, an NDRF member in the valley, said personnel are working day and night to douse the fire, however, they are finding it difficult to bring it under control.

"The fire is spreading rapidly because of strong winds and persistent dryness in the surroundings", the NDRF official said.

Continuation of Operations #DzoukuValley. IAF helicopters resumed Bambi Bucket operations today towards dousing the fire in Dzouku Valley near Kohima. Four Mi-17 helicopters have been deployed at Dimapur & Rangapahar for the task. pic.twitter.com/3LOCUxTOFL

The Dzukou Valley is a popular tourist spot famous for its seasonal flowers and biodiversity. The massive fire which started on Tuesday night has caused significant damage to the environment.

The Manipur government had earlier requested aid from the NDRF and the Army to help contain the wildfire.

Indian Home Minister Amit Shah and State Chief of Manipur Nongthombam Biren Singh are continuously monitoring the situation. Shah has assured all the necessary assistance from the Home Ministry will be provided to contain the situation at the earliest.