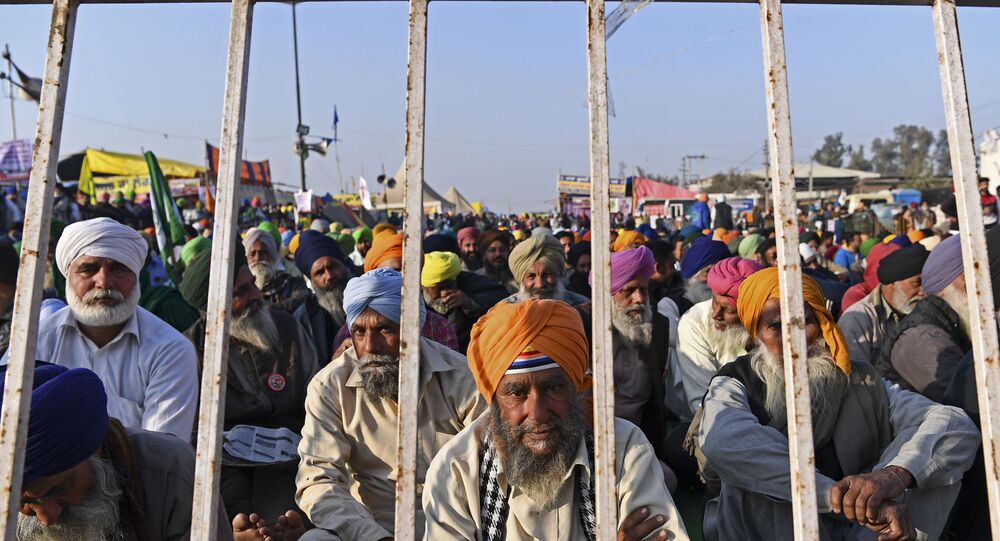 The Indian government is hoping for a positive outcome from the next meeting with protesting farmers' unions on 4 January (Monday). The two sides have conducted several rounds of negotiations but have failed to fully resolve their differences.

With protests against the recently passed agricultural reform laws on the outskirts of the Indian capital entering their 38th day on Sunday, farmers are hoping the New Year will inspire Prime Minister Narendra Modi to revoke the said legislation.

"We are praying to Waheguru (God) to make Prime Minister Narendra Modi a little wiser so that he takes back the passed laws", sys Lakhwinder Singh, a protester at Delhi's Singhu border, one of two protest sites in the area.

As per leaders of farmer unions, more than 50 farmers from the state of Punjab have died in the agitation so far.

"Almost every day one of our brother farmer dies, some have committed suicide as well, if PM Modi still can't take back the laws, it will prove that he's heartless", adds Kuldeep Singh, another protester.

He says that they will stay firm and see how many lives and days it will require for the prime minister to stop being "obstinate" and repeal the laws.

© REUTERS / DANISH SIDDIQUI
Farmer Protests: 83-Year-Old Indian Social Activist Threatens 'Last' Hunger Strike
Amid the continuous deadlock between the farmers and the government over the new agricultural laws, the central government has invited farm unions for the next round of talks on 4 January to find a logical solution to the impasse.

The farmers have announced plans for a "tractor march" on 26 January, the nation's Republic Day, if the government fails to accept their demands.

Braving the cold and rain, thousands of farmers have stayed put since 26 November, and have blocked the roads in Uttar Pradesh and Haryana leading to the capital New Delhi to protest against the agricultural laws passed by the Modi-led government in September.

The laws in question are the Farmers (Empowerment and Protection) Agreement of Price Assurance and Farm Services Act, 2020, the Farmers Produce Trade and Commerce (Promotion and Facilitation) Act, 2020, and the Essential Commodities (Amendment) Act 2020.

According to the government, the laws allow farmers to sell their produce at places apart from their designated government-owned wholesale market. They also aim to allow contract farming under which farmers can enter into supply agreements with private firms for remunerative and pre-decided prices.

However, farmers fear that the new laws will lead to corporate dominance of the agricultural sector and affect their incomes.