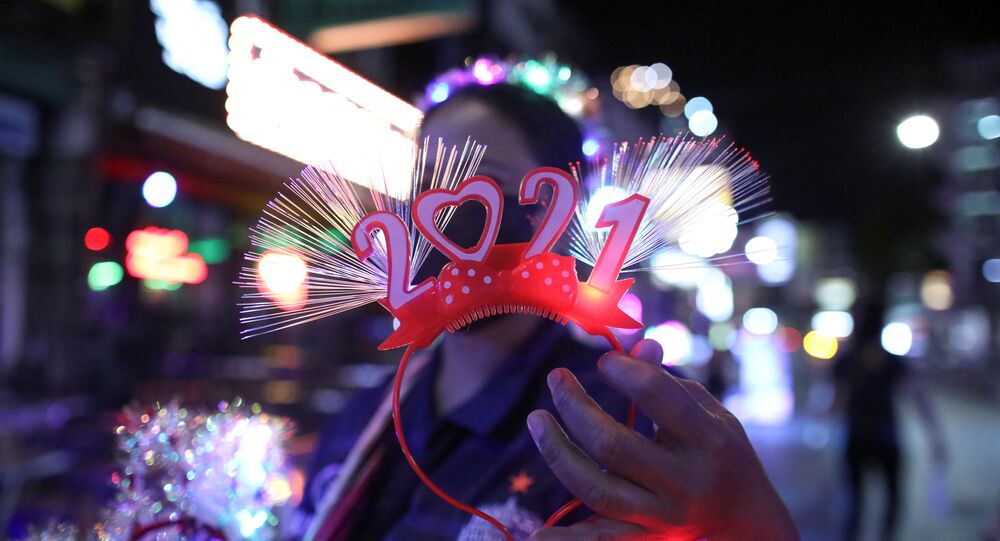 Bollywood stars are making the last day of the year count by spending time with family and close friends. While some have reflected on 2020 by writing poems, others have gone more exotic by flying to the Maldives to ring in the New Year in style.

Bollywood celebrities have been holidaying, hanging out with family, and pouring their hearts out by penning poems to bid farewell to 2020.

Bollywood’s hottest couple, actress Alia Bhatt and Ranbir Kapoor, along with Ranbir’s mother Neetu and sister Riddhima, are spending the last days of 2020 in an exotic resort in the jungle of Ranthambore in Rajasthan.

Alia posted a picture from her vacation on Instagram and wrote, “And to whatever lies ahead of us.. cheers! (sic)”.

Megastar Amitabh Bachchan is seeing in 2021 by making music with his grand-daughter Aradhya Bachchan, son Abhishek, and daughter-in-law Aishwarya Rai Bachchan. He wrote “Tomorrow dawns .. and the celebrations begin .. but for what .. it’s just another day another year .. big deal! Better off making music with the family.”

T 3768 - ... tomorrow dawns .. and the celebrations begin .. but for what .. its just another day another year .. big deal !
Better off making music with the family .. pic.twitter.com/6Tt9uVufbp

Offering a poetic end to 2020, veteran actor Anupam Kher, the star of the American TV series New Amsterdam, posted a video of him reciting a poem describing the relationship between December and January.

“One symbolises the end. The other ushers a new beginning, just like how days come after night, and how night follows day. One is filled with memories, the other gives hope. One has the experience, the other has faith.”

“Both are just as connected, as two ends of a thread. But, even though poles apart, they stand by each other! What December leaves, January accepts as its own, And the promises made by January... December makes them true,” the veteran actor said.

Now that we are on the last day of #2020 and getting on to January #2021, here is poem once again which describes the relationship between the two months. Hope the two years will be different. But the emotions described here will ALWAYS remain the same! Enjoy! 😍🙏😍 pic.twitter.com/NXkEuKtPQE

​For actress Madhuri Dixit Nene, 2020 was “unusual, unexpected, challenging” but to end it on a happy note, she went live and interacted with her fans on Instagram. The actress gave a glimpse of the year gone by in a rewind video in which she can be seen spending time with family during lockdown, celebrating festivals, and much more.

To the year that was 2020. Unusual, unexpected, challenging... I'm looking at the bright side with the hope for a better new year for all of us. Join me to bid adieu to 2020 at 6pm on Instagram LIVE.#2020Rewind pic.twitter.com/UDd28dZM9J

​Actor Anil Kapoor summed up 2020 as “a year of growth, new dreams, hard times, and a lot more” and said he feels blessed to be surrounded by the love and support of his family and team.

Actor Tiger Shroff, on a vacation in Maldives, is going to ring in the New Year with #Hello2021 live streaming on YouTube.

Bring in the new year with #Hello2021! Tonight at 11pm, only on YouTube! #YouTubeOriginals @YouTubeIndia pic.twitter.com/TNPo4oxJ4L

​Known for her witty comments, actress-turned-author Twinkle Khanna took to social media to highlight the things that brightened up her year and wrote “Goodbye 2020! You were awful but the human spirit that looks for hope in dire circumstances can’t help but find a few things that brightened up, even by a tad, this gloomy year for the Tweak India team and all our readers!”

Goodbye 2020! You were awful but the human spirit that looks for hope in dire circumstances can’t help but find a few things that brightened up, even by a tad, this gloomy year for the @TweakIndia team and all our readers! Have a look https://t.co/0uPm3MKkWk

To end 2020 on a high, actor-comedian Vir Das posted a video of him reciting a story in English titled "The 2020 Train" about how he felt about the year.

Here's 'The 2020 Train'.
A story about how this year felt.#HappyNewYear everyone 🤗 pic.twitter.com/1D5pAeEokJ

For actress Karisma Kapoor, the last day of the year was also well spent soaking up the sun on the beautiful beaches of Goa.

While many celebrities such as Shetty Kundra, Manoj Bajpayee, Neha Kakkar, and others have flocked to Goa to ring in 2020 with their families, many celebs travelled to the Maldives with their loved ones including Disha Patani and Tiger Shroff, Ananya Panday and Ishaan Khatter, and Kiara Advani and Sidharth Malhotra.

Bollywood Class of 2020: Debutant Actors of The Year That Caught Everyone’s Attention