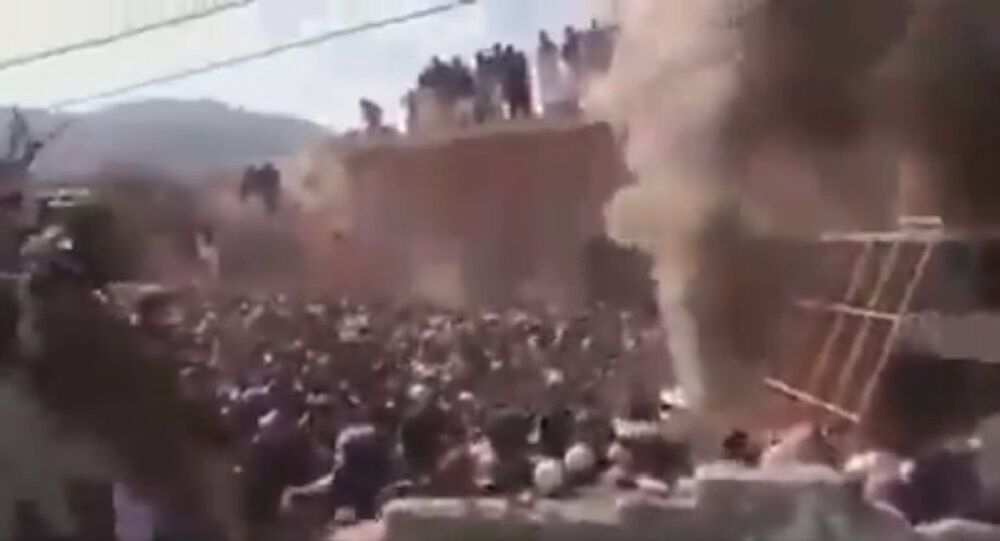 An ancient Hindu temple - Shri Paramhans Ji Maharaj’s Samadhi and Krishna Dwara Mandir - in Pakistan’s Karak district in Khyber Pakhtunkwa was vandalised by a mob on Wednesday who claimed that the temple was trespassing on land it didn't own.

Shocking videos of an angry mob attacking a Hindu temple and setting it on fire in Pakistan's Karak district in Khyber Pakhtunkhwa are doing the rounds on the internet, leading to a new controversy ahead of the New Year.

Meanwhile, supporters of the temple have denied claims by local Islamic clerics that the building had spilt out onto extra land it doesn't own and was carrying out expansion work.

Situated in the village Teri in the Karak district, the historical temple and Paramhans Ji Maharaj’s Samadhi was being restored and expanded according to a supreme court ruling in 2015. The shrine was earlier destroyed and taken over by a local mufti in 1997.

Another footage of a #Hindu temple vandalized in the Karak District of Khyber Pakhtunkhwa, #Pakistan.
pic.twitter.com/cI9IKSvB40

Earlier on Thursday, while the police at Khyber Pakhtunkhwa Police Station registered what is known as a First Information Report, Justice Gulzar Ahmed of Pakistan’s Supreme Court has taken the incident into consideration and has fixed a hearing for 5 January.

Leaving netizens enraged, social media has been deluged with reactions condemning this act that has led to strife and riots in the community.

A mob of extremists Islamists burning down a #Hindu temple in Karak, Kyber Pakhtunkhwa in Pakistan. There is no respect, no tolerance, no freedom and no compassion for religious minorities, their lives and religion is always under attack. pic.twitter.com/5Lkh8jJYAw

This is PURE JIHAD TERRORISM
Yesterday Islamic terrorists BURNT historic Hindu temple in the Teri village of Karak district of Khyber Pakhtunkhwa in Pakistan.
and this was lead by local maulvi !@UNHumanRights pic.twitter.com/zobnVHgoxv

A hindu temple was demolished by religious extremists in karak today. It is very shameful moment for us because it reflects the way of how we treat minorities in our country.
You can't run a federation unless and until the rights of minorities are protected. Strongly condemnable. pic.twitter.com/PJOKZA3a1l

Mob attacks & sets fire to Hindu temple in Paxtan
Crowds of thousands,led by Is||am!c clerics, descended on the Hindu temple in the village of Teri, in Karak district, & began to rip bricks from the walls and set it on fire.
This is the the amount of hatred they’ve on Hindus pic.twitter.com/mobnnqoWoT

A hindu temple demolished under the "Nose " of the state in karak khyber pukhtoonkhwa.Poshtun belt once used to be a land of religious harmony and tolerance :hindu and muslims were living at absolute peace ,then the imposed war ruined the whole fabrics of the society . pic.twitter.com/0JyXQ9GKwv

A Hindu temple set on fire in Karak, KPK by overcharged crowd along with clerics. Seriously don't have words to express my sorrow. When this extremism will end? When we will prosper as a nation regardless of the fact that we belong to other religion?
pic.twitter.com/CyupCflEUo

Indian filmmaker Onir retweeted the video and strongly criticised the hatred and violence triggered by the incident.

This is what we pride doing to each other. Who is the winner? NO Religion, NO God, Just vile hateful humans. We keep attacking whats precious to the "others". Somewhere a temple burned, somewhere a Mosque vandalised , elsewhere a Church converted- all acts of HATE. #SHAMEHUMANS https://t.co/oQjAoSbvfF

This is not the first time this temple has suffered attack. According to a report in India’s newspaper Hindustan Times, a mob tried to demolish the temple in 1997 but after the Supreme Court intervened in 2015, the local community agreed to its reconstruction.

Despite the reconstruction, there was a dispute over the land allocated to the temple.

District police officer Irfan Marwat said the mob was protesting against the expansion of the temple and only demolished the new construction work alongside the old structure.