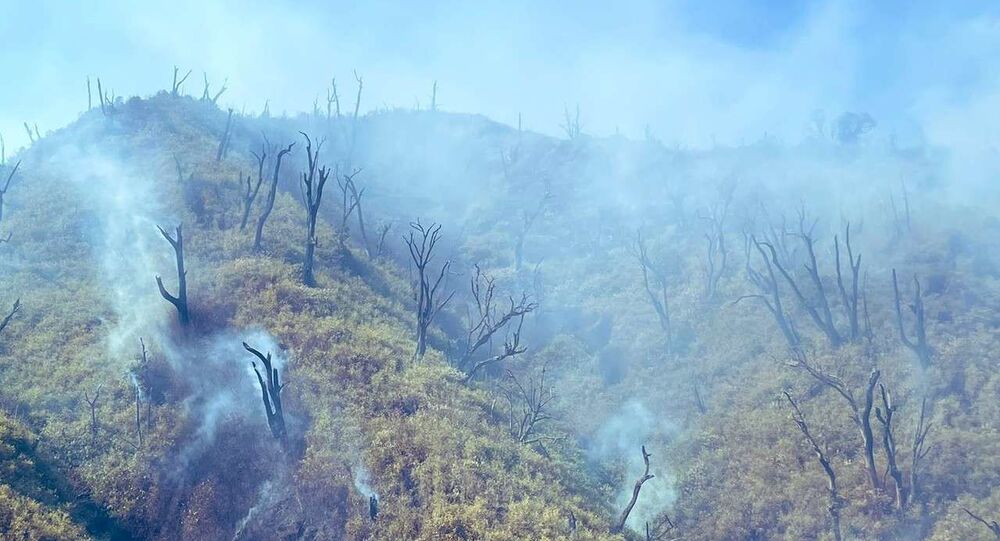 On Tuesday night, a massive fire broke out in the stunning Dzukou Valley which is on the border of the states on Manipur and Nagaland, causing damage to the environment.

The Indian Air Force (IAF) engaged an Mi-17V5 helicopter on Thursday to curb a massive wildfire at Dzukou Valley.

The valley, located on the border of the states of Manipur and Nagaland, is a popular tourist spot. It is famous for its seasonal flowers and bio-diversity.

A spokesman of the Shillong-headquartered Eastern Air Command said the helicopter was launched on the basis of a requisition by the Nagaland state government.

“The helicopter is equipped with a Bambi Bucket for fire-fighting in Dzukou Valley near Kohima,” Wing-Commander Ratnakar Singh said on Thursday.

Very unfortunate, that a wild fire has started at the Dzukou Valley, one of the most beautiful places in https://t.co/KHO56WZKZv probably started about 2-3 days ago from the Nagaland side and crossed over to our side. It is likely that the fire might even reached Mt.Iso areaToday, pic.twitter.com/lvdxZDOhaU

Earlier in the day, the chief of Manipur State, Nongthomban Biren Singh, had cautioned that the Dzukou Valley fire may spread to his state’s dense forest Koziirii.

This photo is clicked at 8.30am from Mao side at mount khugho.(Dzuko FIRE)It has already crossed Mount ASIi the highest peak of Manipur.If the wind direction going to southern side,There is high possibility of entering in the thickest forest call Koziirii in Manipur. Need help 🙏 pic.twitter.com/60OoxtWR3j

Later, the state chief conducted an aerial survey to take stock of the wildfire that broke out at Dzukou valley about three days ago.

"The fire has spread quite extensively and caused serious damage to this part of the mountain range. The fire service, forest officials, and volunteers are reaching the site," the state chief stated.

Taking serious view of the wildfire at Dzukou valley, having a personal aerial survey of the situation, sending more personnel to the spot and seeking help from concerned authorities to stop the spread of the fire and save the deep forest portion of the valley. @PMOIndia pic.twitter.com/WK9IVunX87